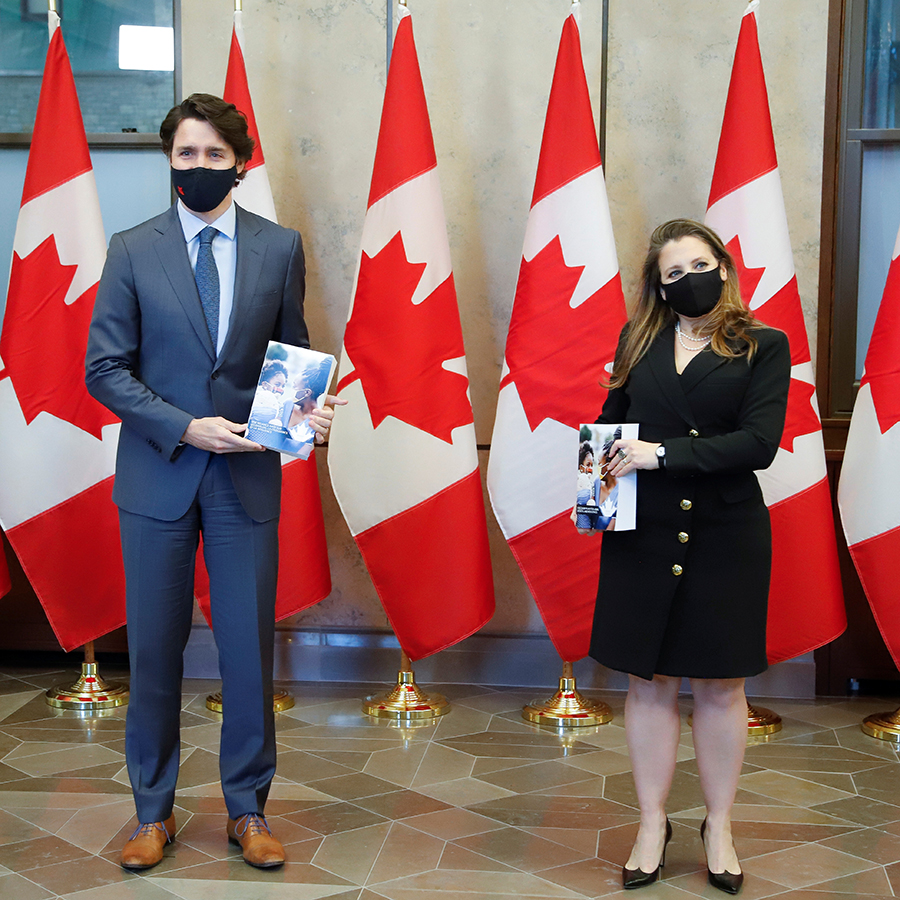 Canadian Prime Minister Justin Trudeau’s government on Monday lined up billions in new spending to provide emergency support during a virulent third wave of COVID-19 and to help launch an economic recovery ahead of an election expected later this year.

It also follows through on stimulus promised late last year, outlining a C$101.4 billion ($81 billion) “growth plan” over three years, with nearly half of that spending coming in the first year.

“There are a lot of announcements today that will make a lot of different stakeholders happy,” said Trevin Stratton, chief economist for the Canadian Chamber of Commerce, adding the budget “will provide a lot of certainty.”

But he also cautioned that the business community was “of the opinion that we didn’t need short-term stimulus in this current situation because there is so much pent-up demand.”

Finance Minister Chrystia Freeland defended the spending, saying hundreds of thousands of Canadians remain out of work because of the pandemic.

“We have to finish the fight against COVID – and that costs a lot of money,” she told reporters.

The deficit for the fiscal year that started on April 1 will be the second largest in recent decades, with the closely watched debt-to-GDP ratio hitting 51.2%, although Freeland promised a return to restraint as the economy gets back to normal.

The Liberal government has been buoyed in the polls by its response to the COVID-19 pandemic and Liberal insiders expect Trudeau to seek an election later this year to try to secure a majority in parliament. The Liberals currently need the support of at least one other party to pass legislation, including the budget.

But a third wave of infections is pounding populous Toronto and its suburbs – a key Ontario region for securing a majority – and the coronavirus vaccine rollout has trailed other wealthy countries like the United States and Britain.

Of the nearly C$50 billion in new spending this year, C$27 billion is set aside to extend pandemic recovery measures like wage and rent subsidies for businesses and for a new program to help transition companies back to hiring.

The budget also aims to create a national childcare program and to make a more aggressive effort to reduce carbon emissions, both measures that opinion polls show are important to Liberal voters.

While Freeland said historically low interest rates allowed significant investment, she also pledged to unwind deficits and reduce the debt-to-GDP ratio over the medium term. A senior government official said, however, that a fiscal anchor should not be seen as a restrictive “straitjacket.”

The official also said that the government had run stress tests on the accumulating debt and was confident of its abilities to service that debt even as interest rates rise in the future.

“It’s hard for us to draw a conclusion that we’re out over our skis. We don’t believe we are. We think we’re in very solid terrain,” the official told reporters.

Surging growth should also increase revenues, with 5.8% growth forecast for this year, after a 5.4% contraction in 2020.

The deficit in the current year is projected to hit C$154.7 billion, less than half the previous fiscal year, with total national debt soaring to C$1.23 trillion this year, up from C$1.08 trillion in the previous year.