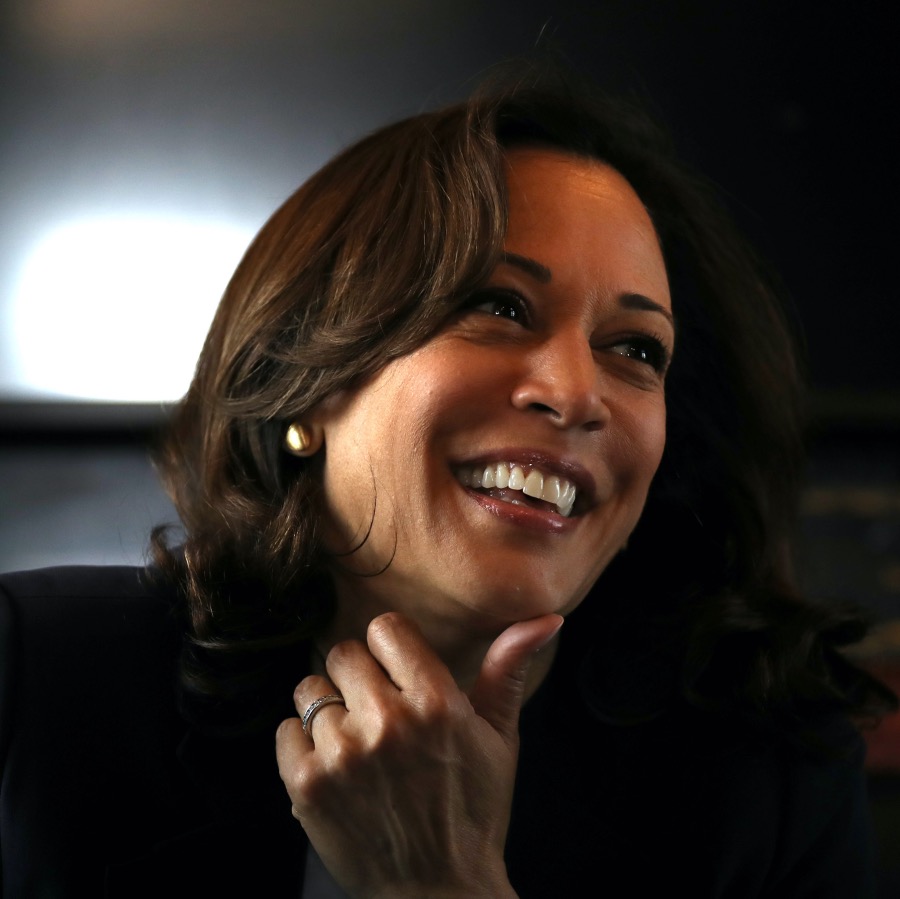 Now that Joe  Biden has officially been declared President-Elect of the U.S., Kamala Harris will soon be sworn in as Vice President.

When she assumes the second highest office in the U.S., Harris will break two barriers – gender and race. She will become the first woman, and a Black and South Asian one at that, to serve in the role.

Democrats and progressives who understand the role of misogyny in Hilary Clinton’s loss to Donald Trump in 2016, can take heart – especially in light of the passing of Supreme Court Justice Ruth Bader Ginsburg – that half of the electorate now has representation in the corridors of power.

As Clinton gamely said when she lost another bruising political battle, this time to Senator Barack Obama for the Democrat Party nomination for the  2008 election: “Although we weren’t able to shatter that highest, hardest glass ceiling, this time, thanks to you, it’s got about 18 million cracks in it.”

Harris, on the Biden ticket, and her Democrat voters have now put almost 75 million cracks in that glass ceiling. And she is poised to go all the way and shatter it, the next time history comes calling.

This past August when Biden chose  her as his running mate, Irma Bay explored why Kamala Harris is the right woman for the job – and for the times.

A Closer Look at Kamala Harris, the First Black Woman on a Vice-Presidential Ticket

When President Joe Biden finally chose his running mate, he tabbed Kamala Harris, a senator from California, for his ticket in the upcoming U.S. election.

Accepting the role, Harris tweeted: “Joe Biden can unify the American people because he’s spent his life fighting for us. And as president, he’ll build an America that lives up to our ideals. I’m honoured to join him as our party’s nominee for Vice President, and do what it takes to make him our Commander-in-Chief.”

Harris, 55,  becomes the first Black female to be on a presidential ticket and the first woman of colour to be a vice-presidential nominee. She is also of South Asian descent.

This choice gives Biden another pivotal role in the country’s long march to racial equality, having served as vice-president to Barack Obama, the 44th president of the United States and the first Black leader of a country built on the spoils of slavery.

Harris is also only the third female to be the vice-presidential nominee of either major party — following Sarah Palin for the Republican Party in 2008 and Geraldine Ferraro for the Democrats in 1984.

And while Hillary Clinton failed to break that hardest, highest glass ceiling by losing the 2016 American election (in the Electoral College) to Donald Trump, this historic choice propels Harris beyond the VEEP stakes.

If the polls that put Biden ahead of Trump hold and Biden is elected the 46th president of the United States on Nov. 3, he will be just a few weeks shy of his 78th birthday — the oldest president ever. In that scenario, Harris would become the first female vice-president of the U.S.

The appointment also allows Biden to fulfill his age-related pledge to be a transitional figure to the next generation of leaders. If he does win, Harris, 55, would be a heartbeat away from the presidency, an office held by a still vital yet elderly man. And she would immediately be in pole position as a contender for the office in 2024.

Prior to the announcement, this not-so-long-game scenario seemed to have deep-sixed Harris’s chances with Biden. His campaign insiders leaked that Harris was too ambitious and would chafe at serving as a No. 2. They also questioned her loyalty, calling to mind her surprise debate kneecapping of Biden on his record of race during her abbreviated run for the nomination during the Democratic party primary despite her friendship with Biden’s late son, Beau, and the fact he had campaigned for her in the past.

It was duly leaked that during the vetting process, she expressed no remorse for playing hardball. The fear, too, was that her charisma would overshadow the top of the ticket as Biden has been at times wobbly and, dare we say, a bit sleepy on the stump. In the end — and in credit to his leadership qualities — Biden chose to overlook past political battles and look ahead to the war, deciding to choose what conventional wisdom believed  to be the most qualified candidate: Harris.

“I need someone who understands that we are in a battle for the soul of this nation. And that if we’re going to get through these crises — we need to come together and unite for a better America. Kamala gets that,” wrote Biden in an email to party supporters.

He also needs someone who can take and throw a punch.

Harris was born in Oakland, Calif., raised in Berkeley, Calif., and lived in Montreal while her mother pursued her career as a breast-cancer scientist.

Returning to the U.S. after high school, Harris graduated from a storied historical Black college, Howard  University, where she pledged to the Alpha Kappa Alpha, a sorority founded there in 1908. According to the New York Times, the sorority currently boasts 300,000 members and is known for “its work in get-out-the-vote operations.”

Harris received her law degree from UC Hastings College of the Law in San Francisco in 1990. After serving as a prosecutor for 26 years, she was elected San Francisco’s district attorney before being elected attorney general of the state in 2010.

Not only was she the first woman of colour to serve in that role, she also ran the largest justice department in the U.S. after the federal institution. During her tenure, she was lauded for forcing banks to pay a larger than offered settlement to California residents affected by predatory mortgage-lending practices in the wake of the  2008 financial meltdown.

She was re-elected in 2014 and and then ran for the U.S. Senate in 2016 — becoming only the second Black woman (after Carol Moseley Braun of Illinois who was elected in 1992) to serve in the Senate.

Harris’s political trail-blazing and diverse background — she’s a first-generation American (her father, Donald Harris, emigrated from Jamaica, and her mother, Shyamala Gopalan, from India and she has a younger sister, Maya) — has earned her the nickname “the female Obama.” And like him, she quickly distinguished herself in the nation’s capital — even running for president in the third year of her first term, as Obama audaciously did.

Her star, like his, quickly rose. In key made-for-TV moments, she became a favourite of “the resistance.” Garnering national attention during Senate hearings, she has put her political chops to work eviscerating Trump administration nominees like Attorneys General Jeff Sessions and Bill Barr and Supreme Court Justice Brent  Kavanaugh under incisive, relentless questioning.

In contrast to the avuncular manner in which Biden dispatched Palin in ’08 and Paul Ryan in ’12 during the VP debates, pundits are already projecting a Harris knock-out when she faces off with the plodding incumbent, current VP Mike Pence.

Trump’s defeat of Hillary Clinton sparked the Women’s March in January of 2017, the largest citizens protest in American history. And as the first term of the 45th president winds down, the country is riven by racial unrest fired up police brutality, and a divisive Trump has seen ongoing Black Lives Matter protests.

It is in this climate that Biden committed to picking a woman. And with a record number of African-American women under consideration — such as former national security adviser Susan Rice and chairperson of the Congressional Black Caucus Karen Bass,  it became a matter of how much history Biden was willing to make.

As the selection process dragged on and oppo research started to create a circular firing squad, a backlash against the inherent sexism and implied racism of some of the information bandied about ensued, criticizing the way it pit the women against each other in a way that male candidates never are. The Harris announcement was made in time for next week’s mostly virtual convention when Biden and Harris will officially accept their nomination — strategically before the situation became toxic.

Black female voters had signalled they would have been satisfied  with Senator Elizabeth Warren of Massachusetts, a white woman with progressive financial policies popular with African-Americans.  But after reports emerged just days ago that Biden had met in person with Michigan Governor Gretchen Whitmer, a white woman, female African-American party stalwarts, organizers, operatives and activists sent a clear and public message to the Biden campaign that, as Errin Haines wrote in The 19th, Biden needed to “write us into history” and that “many Black women strategists, activists, organizers and voters … have reached a point where they believe choosing a Black woman vice-presidential nominee is no longer a recommendation but a requirement.”

Black female voters support the Democrats nine times out of 10 and, in the 2016 election, 96 per cent voted for Hillary Clinton. They also rescued the floundering Biden campaign in South Carolina, giving it the renewed momentum that led to his primary victory.

An Alternative to Trump’s Hate

While there is quibbling that Harris’s record in the criminal justice background will turn off young progressive Black voters (she claims to have worked from the inside to reform draconian practices that primarily targeted Black and Latino males), it will be a useful counter to Trump’s racist “American carnage” messaging and the branding of himself as the “law and order” president.

Trump, who has a pattern of bullying misogyny toward women, especially Black women journalists and elected officials, has predictably dubbed Harris “nasty.” It’s a slur and an attitude that Harris is uniquely positioned to face down. The contrast between the  emerging majority of the new multicultural voice and the implicit bias of the retrograde “Make America Great Again” promise could not be clearer than in the person of Harris and her journey as the daughter of immigrants of colour.

With her, the firsts just keep coming. That she is the first person from a western state to ever make it onto Democratic party ticket may be minutia, but the fact that, should the Biden/Harris ticket prevail, her husband (entertainment lawyer Douglas Emhoff whom she married in 2014 and who has two children from a previous marriage) would be the first male and Jewish spouse of a vice-president or president.

Harris often repeats her mother’s admonition — “Kamala, you may be the first to do many things, but make sure you’re not the last.” She is the promise realized of Obama’s Hope and Change. It was Biden’s loyal eight-year service to a younger Black man that has endeared him to the Black community, and it is the winning formula of that multi-cultural ticket, the respectful but frank working relationship and abiding friendship with his boss, Obama, that Biden hopes to recreate with Harris.

Yet Harris stands on the shoulders of another iconoclast. Shirley Chisholm of New York, the first Black woman to be elected to congress, was the first woman and first African-American to seek the nomination for president in a major political party in 1972.

“I ran for the presidency, despite hopeless odds, to demonstrate the sheer will and refusal to accept the status quo,” she said. “The next time a woman runs or a Black or a Jew or anyone from a group that the country is ‘not ready’ to elect to its highest office, I believe that he or she will be taken seriously from the start.”

It took 48 years,  but Kamala Harris is running — for both the past and the future.

As Democrat strategist Karen Finney told Haines: “Black women are sick and tired of being considered the backbone of the Democratic Party. We want to be recognized as leaders. We want all the things. We’re due.”