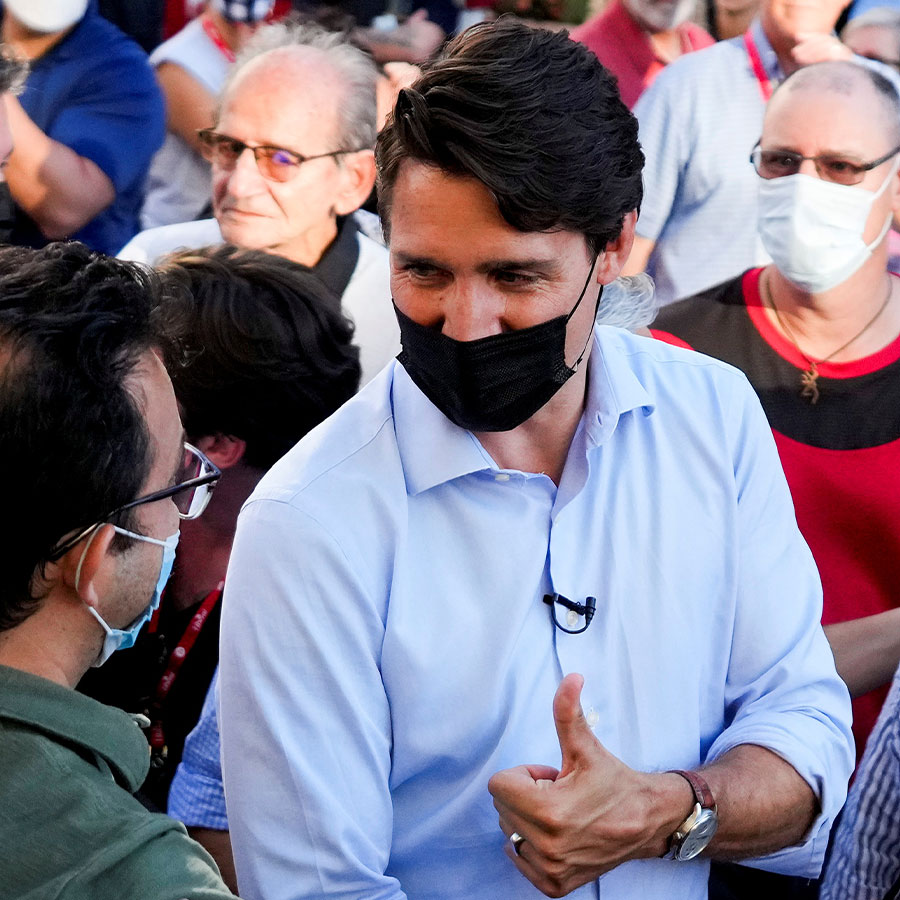 Canadian Prime Minister Justin Trudeau, seeking to carve out a lead ahead of Monday’s election, accused his main rival on Thursday of showing weak leadership in the fight against COVID-19.

Opinion polls show Trudeau’s center-left Liberals effectively tied with the right-of-center Conservatives led by Erin O’Toole and set to fail in their bid to win a parliamentary majority.

Kenney, who served in Conservative former Prime Minister Stephen Harper’s Cabinet before the Liberals took power in 2015, backtracked this week after a surge in COVID-19 cases threatened to overload the provincial healthcare system. Kenney apologized and said he would introduce vaccine passports.

“The choices that leaders make in a crisis matter … just a few days ago Mr. O’Toole was still applauding Mr. Kenney for his management of the pandemic,” Trudeau told reporters in Montreal.

“That’s not the leadership we need in Ottawa to end this pandemic for good,” added Trudeau, who backs mandatory vaccine mandates. The Liberal leader heads a minority government that depends on the opposition to pass legislation.

O’Toole has repeatedly sidestepped questions about his earlier support for Kenney’s approach to COVID-19.

“As prime minister, I will work with all premiers, regardless of stripe, to fight against the pandemic,” O’Toole told reporters in Saint John, New Brunswick, saying Trudeau should not have triggered an election during a pandemic.

A fourth wave of COVID-19, driven by the Delta variant of the coronavirus, is surging mainly among the unvaccinated, Theresa Tam, the country’s chief public health officer, said at a briefing in Ottawa.

“Hospitalizations could exceed healthcare capacities in impacted areas,” she said.

Alberta and neighbouring Saskatchewan have the worst rates of COVID-19 cases per capita in Canada. Alberta has a record number of COVID-19 patients in intensive care, rising 16% in the past week, and is in discussions with Ontario about sending patients there, Verna Yiu, chief executive of Alberta Health Services, said on Thursday.

Trudeau said his government would send ventilators to Alberta. Liberal campaign organizers, citing unhappiness with Kenney, said their party could pick up three of Alberta’s 34 federal seats after being shut out in the traditionally right-leaning province.

With Saskatchewan hospitals nearing capacity, Premier Scott Moe imposed a mask requirement for indoor public spaces starting on Friday. By Oct. 1, provincial government employees must be vaccinated or submit to regular testing, and people must be inoculated or test negative to dine in restaurants.

How to handle COVID-19 has become a challenge for O’Toole. He supports inoculations, but says he prefers rapid testing to detect the virus rather than vaccination mandates.

The Conservatives are at risk of seeing some support leak to the right-wing People’s Party of Canada (PPC), which is feeding into public anger over vaccinations and lockdowns.

PPC leader Maxime Bernier, who also was a minister in Harper’s government, attacked Kenney over his vaccine passport announcement, tweeting that he would go to the province “to join Albertans in their fight against this despot.”

A rolling Nanos Research telephone survey of 1,200 Canadians for CTV on Thursday put support for the Liberals at 31.9%, the Conservatives at 30.3% and the left-leaning New Democrats at 22.4%.

Such a result could produce deadlock in which no party is able to form even a stable minority government. Trudeau triggered the election two years early, seeking to benefit from his handling of the pandemic, but the Liberals have so far not been able to shrug off voter fatigue.

Trudeau got an endorsement on Thursday from former U.S. President Barack Obama, who wished his “friend” all the best in the election.

“Justin has been an effective leader and strong voice for democratic values, and I’m proud of the work we did together,” Obama wrote on Twitter.