How to Add a Little Swiss Twist to Your Holiday Festivities 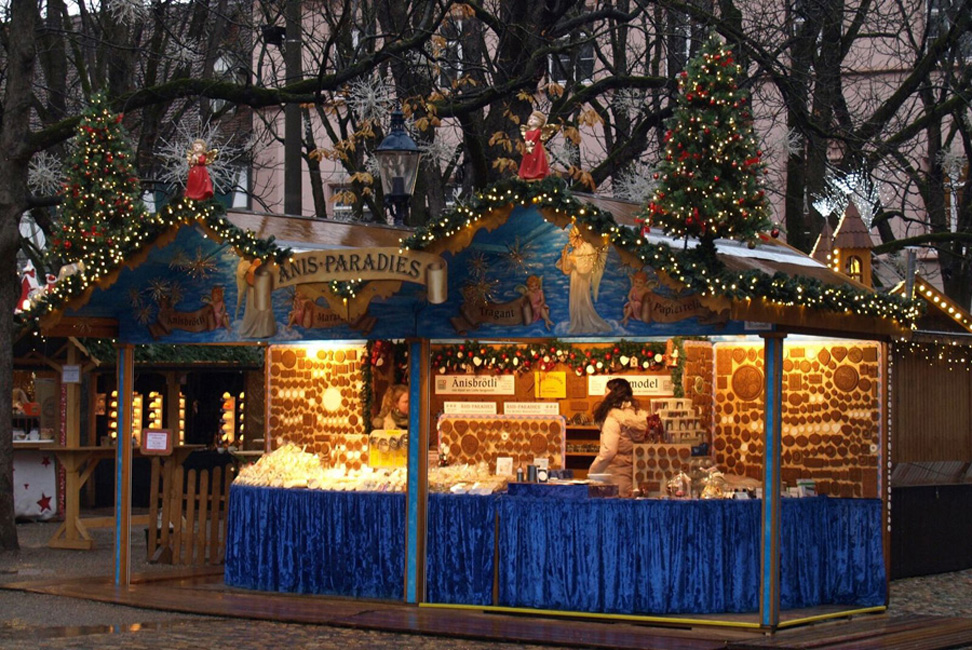 Here, we explore Switzerland in all its winter glory—and introduce ways to infuse Swiss traditions into your festive celebrations.

If Europe were a schoolroom, Switzerland would be the overachiever.

It’s the land of watches and punctuality (ask anyone who’s travelled the rail system). A jaw-dropping vista of lakes, mountains and chalet-spotted valleys. More than 450 varieties of cheese. Four official languages. And dozens of Christmas markets, each oozing food, drink, crafts and decorations steeped in Old World traditions.

Nowhere is more atmospheric than the German-speaking eastern two-thirds of the country. The glühwein is flowing, wooden market stalls are festooned with boughs of greenery and twinkling white lights, fondue is bubbling and potato rösti is sizzling in the frying pan.

Perhaps a transatlantic trip is not on the radar, but there are ways to infuse touches of Switzerland into your Canadian holiday festivities.

Every Christmas market has glühwein stands—copper pots of steaming red (and sometimes white) wine infused with sugar, cloves, cinnamon sticks and slices of oranges and lemons. It’s easy to make on the stovetop—dissolve the sugar, bring ingredients to a simmer, serve in mugs and if you really want to add a Swiss touch, find a chair outside and cuddle under a warm throw or blanket.

Sharing is intertwined with the Swiss holiday experience. The main Christmas meal on December 24th is often fondue chinoise; pieces of meat cooked in a hot pot of boiling broth and served with a selection of sauces (from curry sauce to horseradish to spicy mayo—anything goes). Christmas Eve is when family traditionally gathers to open gifts while the 25th is for relaxing and visiting.

The Swiss don’t shy away from fat-rich cheese throughout the holidays. Out come the fondue pot and raclette trays. Traditional cheese fondue begins with a dry white wine (Sauvignon Blanc and Riesling work well), a smashed clove of garlic and a mixture of grated Swiss cheeses lightly tossed in flour. Each restaurant guards the mix of their fondue cheeses but you can’t go wrong combining Gruyere, Emmental, Tilsiter or Appenzeller. A nightcap of kirsch liqueur helps digestion.

Älplermagronen is so much more than its kissin’ cousin, North American-style mac ‘n’ cheese. This is hearty herdsman’s food, perfect for a cold, blustery day. Boil diced potatoes (skins on) together with long tubular macaroni. Once done, drain well and layer in a baking dish with grated bold cheese like Gruyere or Tilsiter. Top with just-boiled stock-cream mixture, ground pepper and browned onion strips. Serve with a side of applesauce. Lick the bowl clean.

Market fast food is often something like bratwurst served with a slice of rye and a squirt of spicy mustard. There are steaming cups of fondue-to-go (served with sticks of bread for dipping), Swiss chocolate in all shapes, cookies and gingerbread cakes.

Roasted chestnuts (marroni) are another Christmas market staple. Roasting them at home brings the Old World flavours into a modern Canadian kitchen. Using a sharp knife, make a long slit through the chestnut, cutting the outer shell but not the flesh of the nut. Soak the nuts for an hour, drain well and place in a single layer in a baking pan. Roast at 350F for 30 minutes. Peel and eat immediately or chop to use later in recipes.

Ground nuts, chocolate and butter are staples in many Swiss cookie recipes. There are so many different varieties—from almond crescents to the popular mailänderli to cinnamon stars and gritibänz (a soft, sweet bread shaped like a man). Bakers can find recipes with a simple Google search.

The centrepiece of the Christmas countdown in every home is the Adventskranz, a tabletop wreath made of evergreen branches with four chunky candles. The first candle is lit four Sundays before Christmas Eve. Each week after, an additional flame is added until all four are burning bright. The anticipation will electrify the grandchildren.

The Swiss love to use natural basics for décor. Boughs of greenery, pinecones, grapevine, strips of ribbon and ornaments are often intertwined to line a handrail or place above a door. Glass vases or bowls are filled with red and gold baubles and placed close to a lamp so the ornaments and glassware sparkle.

It’s traditional to put out nuts and mandarins or tangerines as a seasonal treat. Bring that custom home by poking a candle into a mandarin base—as it heats the juices, the fruit fills the room with an intoxicating scent.

The first Christmas trees were symbols of life and hope. Early decorations were nuts, apples and exotic fruits, which only the wealthy could afford. Legend tells of a poor glassblower who could not pay to adorn his tree with fruits, so created glass ornaments. These days there are specialty shops in every Swiss town showcasing intricate glass ornaments—none more celebrated than Basel’s Johann Wanner, which ships worldwide.

Travelling by train is the most efficient way to get from one city or town to the next. The Swiss Travel Pass covers trains and boats and public trams and buses in cities like Basel, Lucerne and Zurich. www.myswitzerland.com

Switzerland: Come for the Scenery, Stay for the Chocolate

Swiss Adventures in Food and Drink