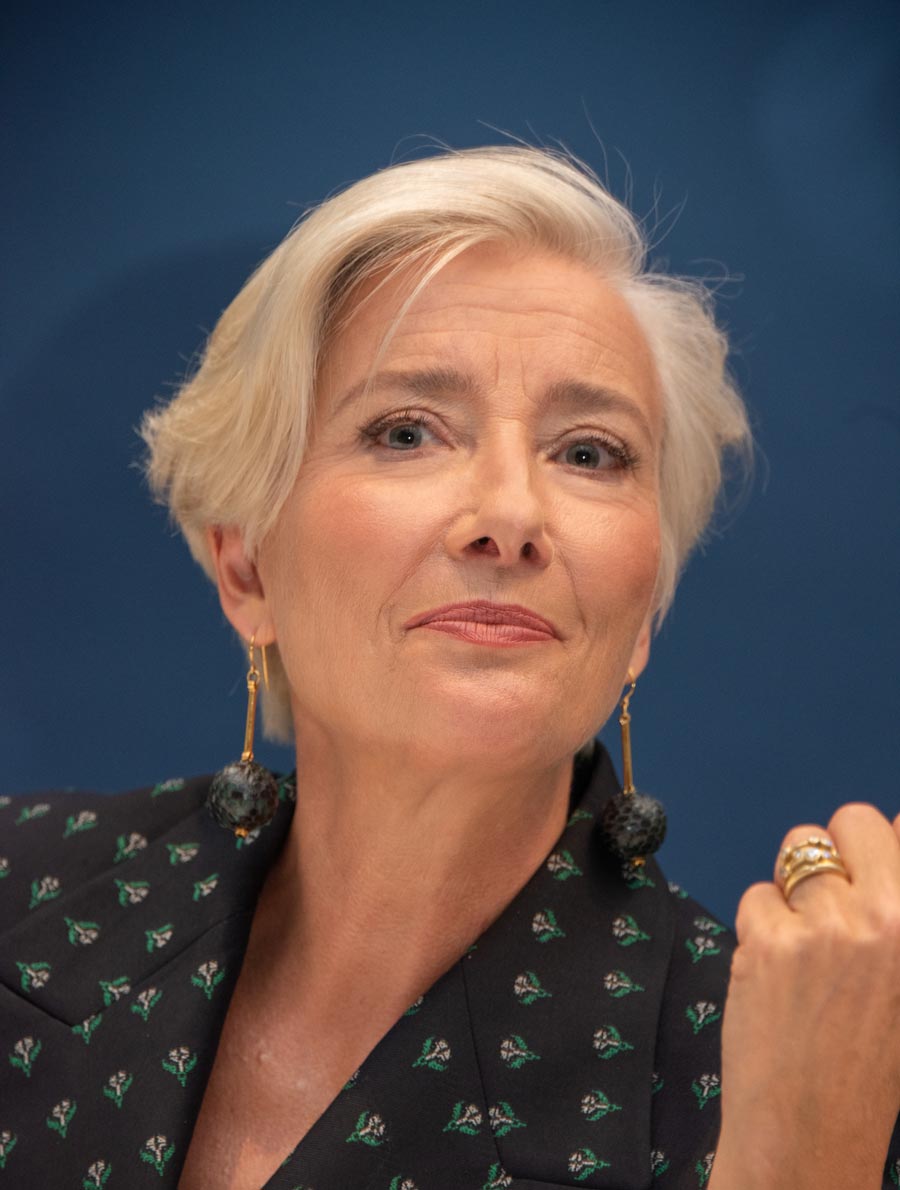 Emma Thompson at the "Late Night" Press Conference at the Corinthia Hotel on May 20, 2019 in London, England. (Photo by Vera Anderson/WireImage)

When Emma Thompson turned 60 in April, she found herself wondering who she is.

Her fans — and that means most of us — know who she is.

A former Zoomer cover star, she’s the radiant, gracious and, above all, intelligent actress who’s inhabited many memorable roles, from no-nonsense nannies to the yearning housekeeper in Remains of the Day to the Jane Austen character in Sense and Sensibility, for which she won the Oscar for writing the best adapted screenplay.

Thompson is the only woman who has won Oscars for acting and writing.

So an identity crisis is the last thing you’d expect to strike Emma Thompson.

She revealed her doubts in an interview with the New York Times while promoting her latest movie, Late Night, which opens June 7.

Written by and costarring Mindy Kaling of The Office, Thompson plays a late night host who  runs into trouble when, because of diversity requirements,  she hires a woman (Kaling, age 39) to join her all-male writing staff.

Generational conflict and cultural conflict result in comedy and drama.

But even with a plum role at the age of 60, Thompson told the Times she’s having an end-of-middle-age identity crisis.

“The eternal question, which I never thought I’d ask, is who am I?” she said. “I was always so sure. As it turns out, I have no idea.”

It’s not aging that has her searching.

The years don’t bother her.

“The denial of aging is unhealthy,” she insisted. “It’s always been bollocks.”

Until recently, she said, she was sure of her real-life roles as daughter, wife, mother, actress, writer.

But now that she’s embarking on her 60s and also facing an empty nest (daughter Gaia with husband Greg Wise is 19 and their adopted son, a former child soldier from Rwanda, is 26),  she’s unsure of how to see herself.

“There’s lots of these roles that are in fact imposed on you by society, for years and years and years, then you suddenly go — am I any of those things? And if I’m not, who am I?” Thompson said.

One real-life role she’s adopted with enthusiasm is social activist and environmentalist.

“We are in a race, as you know, against consciousness and catastrophe,” she told the Times.

She dropped out of a movie after she learned that John Lasseter was named head of the studio producing it. Lasseter had been forced to leave Pixar, which he’d founded, and Disney, where he was chief creative officer for animation,  after accusations of inappropriate sexual harassment.

And she’s confident enough to be quirky.

Famously, she wore white sneakers to Buckingham Palace last year for the ceremony in which she was made a Dame by Prince William.

“When the English press affected shock,” reports the Times, “Thompson shot back that the shoes were designed by Stella McCartney, thank you very much, and actually quite posh.”

Although she’s never lacked for rich screen roles despite her age, Dame Thompson is not especially happy about the evolution of roles for women.

“Late Night,” she said, was an exception and one of the best scripts she’s read.

The director of Late Night, Nisha Ganatra, told the Times that the Emma Thompson we’ve come to know and love on screen is the same woman off-screen.

“During production, Ganatra said she studied Thompson closely, trying to figure out how the actress seemed to live her life with such brilliance and grace,” reported the Times. “She concluded it had a lot to do with Thompson being present and humble. Ganatra watched as Thompson passed out Italian chocolates late one night to the crew, and reached up to absent-mindedly stroke the leaves of a tree she walked under one rainy day.”

The Importance of Being Emma (Thompson)