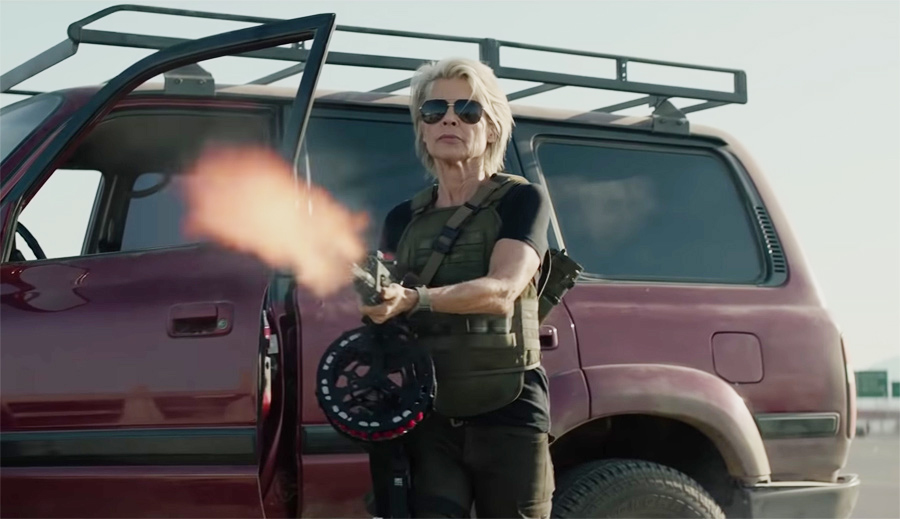 Age has never been a problem for men in action movies. In fact, male action heroes just keep getting older and older. Clint Eastwood was 62 when he appeared as gun-slinging sexagenarian in the 1992 western Unforgiven. Now, this September, Sylvester Stallone, at age 73, appears as Rambo for the fifth time in Rambo: Last Blood. Harrison Ford, meanwhile, will be 79 when he reprises his role as Indiana Jones in the next instalment, due in 2021. And Arnold Schwarzenegger returns in November at the age of 72 to play the Terminator in The Terminator: Dark Fate.

Movie News reported that he’s also hoping to play King Conan the Barbarian again, “when Conan is, like, 70 years old and he’s disgusted by sitting on the throne and being the king and then something happens after that.”

But enough about the old men, including the inarticulate ones. It’s the women over 60 in action films who are showing unexpected post-menopausal zest and power.

The Women Taking Over

Helen Mirren arguably started the trend, starring as an assassin in the action films Red and Red 2 at ages 65 and 68 respectively. And last week we learned that Jamie Lee Curtis, 60, agreed to reprise her role as Laurie in two new upcoming Halloween films. She made her film debut at age 19 as Laurie, teenage babysitter and adopted sister of the mad slasher, in the first Halloween movie in 1978 and, 40 years later  she returned to the role in 2018’s Halloween — a massive box office hit to the tune of a $255 million worldwide gross and a record haul for slasher films. As it turns out, women in their 60s aren’t just great action heroes — they’re bankable too. And that, no doubt, played into the decision to bring Curtis back to star in two more Halloween films.

And then, of course, there’s Linda Hamilton, who nearly broke the internet when she arrived, guns a-blazing, as Sarah Connor in the first trailer for Terminator: Dark Fate back in May. She’ll be 63 when the film opens November 1.

“I really gave it careful consideration,” Hamilton said about playing the role at a press conference at Comic-Con this month. “The character is the same, but time changes everything. I felt there was a world of richness I could explore, and then rock it as a woman of a certain age.”

Like Curtis and her role in Halloween, Hamilton first took on the part of Sarah Connor decades ago, in 1984, when she was only 28 years old. And also like Curtis, she looks and acts far more the part of the butt-kicking action star now, in her 60s, than she did when she originated the role years earlier.

During her press conference, Hamilton acknowledged that she dieted and trained to get  into shape for the role, but that the preparation for reprising the role went deeper. “People will always talk about the training and the body, but the real work I did was …to go to my deepest sorrows and place of loss.” She added, “I am so much more than I was. My life experience is only going to enrich the character I will play.”

Of course, the fact that women over 60 are thriving as action stars shouldn’t come as a surprise. Anthropologists have noted that, with the diminishment of estrogen at menopause and the loss of reproductive ability, women experience a renewed sense of vitality and tend to become more assertive and less willing to simply please and nurture. Margaret Mead called this PMZ — post-menopausal zest: “a physical and psychological surge of energy.”

And going forward, just think of the possibilities:

Redefining Past Perceptions of Action Heroes

But all that is in the future.

In the not-too-distant past, postmenopausal women were about as invisible in action movies as transvestite nuns. In 1992, I interviewed Sigourney Weaver, who was promoting her third Alien movie, which has plenty of action though it’s actually sci-fi horror. I asked her about the possibility of doing Alien 4 in the future.

“It would be pushing the limits of my belief to have this character save the day yet again,” said Weaver dryly. She nevertheless went on to do Alien: Resurrection five years later.

And yet I, to my everlasting shame, wrote then that, “At 42, Weaver’s reluctance to reprise her famous role in a fourth swing through the stars may be shaped by her own ambitions … as much as by the credibility of a menopausal Ripley several years hence.”

6 Stylish Black Women Over 60 Who Still Influence Us

Why Maintaining Our Muscles is Important to Healthy Aging