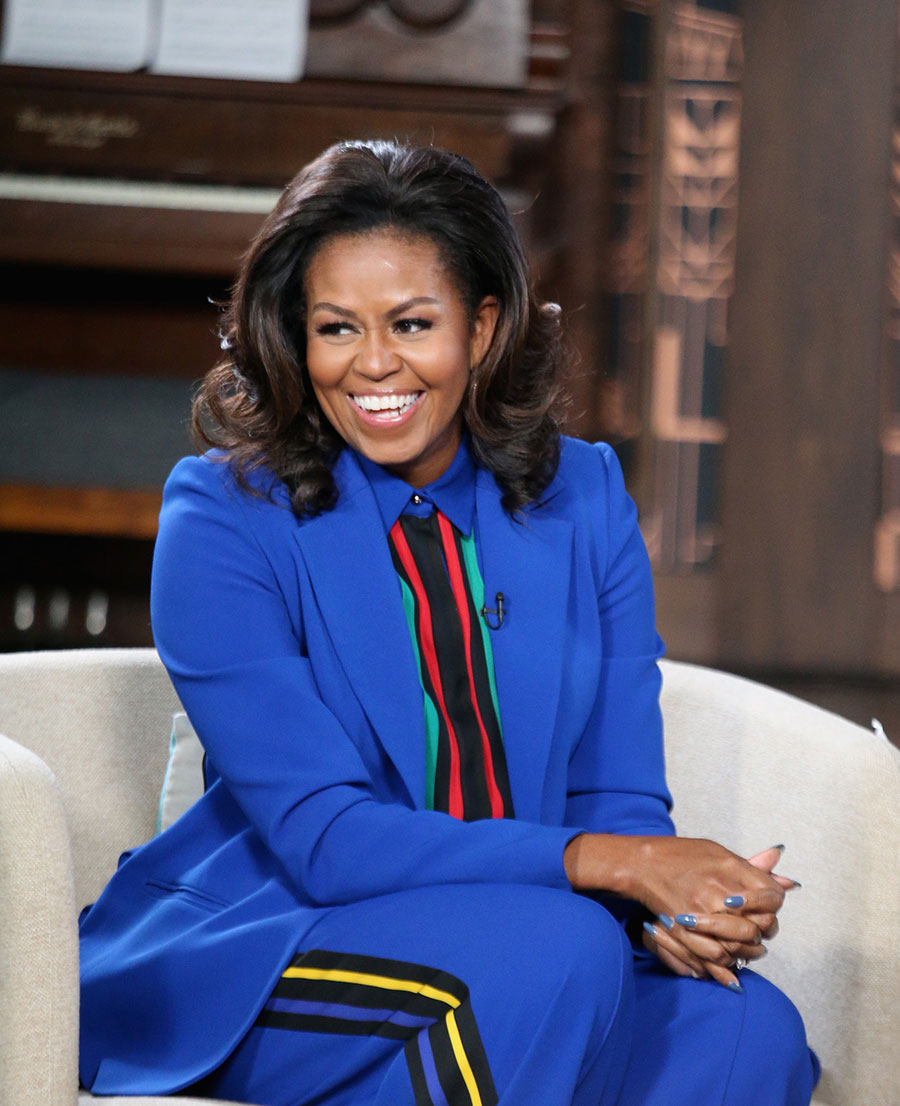 Michelle Obama is an equal opportunity icon. She is universally beloved by all genders, ages and races, except for the usual suspects in the far-right reaches of the internet, who will forever troll her looks and femininity through a toxic racist lens.

It’s been ever so since she entered public life on the campaign trail beside her husband, Barack, on his historic path to victory in 2008 as the 44th president of the United States, the first African-American to hold the office.

The significance of this journey was best encapsulated by Obama herself when she said in a 2016 speech at the Democratic National Convention near the end of her tenure as First Lady:  “I wake up every morning in a house built by slaves. And I watch my daughters, two beautiful, intelligent, Black young women, playing with their dogs on the White House lawn.”

Genesis of a Best-Seller

Clearly she had a story to tell unlike that of any other First Lady, and Obama was determined to “own it. ” Early on, opposing political operatives and some elements of the press attempted to define her as the stereotypical “angry black woman,” who also happened to hate America. It backfired after this pushed her to lean into her authentic self in an unaffected manner – see the screaming headlines when she hugged the Queen!

Her sunny Mom-in-Chief demeanour endeared her to the public as much as beating at Ellen DeGeneres at push-ups did, not to mention the famous stony-faced, side-eye she deployed at the Trump inauguration. She brought the “all of it” approach to her memoir, released in November 2018, announced with this statement on her social media accounts:

“Writing Becoming has been a deeply personal experience. It has allowed me, for the very first time, the space to honestly reflect on the unexpected trajectory of my life. In this book, I talk about my roots and how a little girl from the South Side of Chicago found her voice and developed the strength to use it to empower others. I hope my journey inspires readers to find the courage to become whoever they aspire to be. I can’t wait to share my story.”

Like Obama’s charisma, humour and style (arms, bangs and J. Crew cardigans!), the message connected. Becoming sold 1.4 million copies in its first week, and went on to sell 10 million by March 2019, making it the best-selling memoir of all time. (She also won the best spoken word Grammy for the audiobook and published Becoming: A Guided Journal for Discovering Your Voice.)

The phenomenon was powered by the #iambecoming book tour, which included sold-out dates in Vancouver, Edmonton, Montreal and Toronto. Obama invariably got a rock-star welcome when she took to the stage to be interviewed – usually by a famous friend – for the part self-help seminar, part talk-show love fest, and the events form the backdrop for the documentary Becoming, which has its premiere on Netflix today.

Watch the trailer for Becoming below

A synopsis from the streaming service says the film is “an intimate look ” into Obama’s life, “during a moment of profound change, not only for her personally but for the country she and her husband served over eight impactful years,” and that it takes “viewers behind the scenes as she embarks on a 34-city tour that highlights the power of community to bridge our divides and the spirit of connection that comes when we openly and honestly share our stories.”

The former President does not appear in the doc, but the couple’s daughters Malia and Sasha give their first interviews since they were interviewed with their parents on Malia’s July 4th birthday at a 2007 campaign event. After the children were criticized for being precocious, the Obamas vowed to shield them from the press.

Watch the 2007 interview with the Obama’s below

In the Becoming documentary, third-year Harvard student Malia, 21, seems relieved her mother “is no longer facing that same scrutiny” she endured as First Lady, while Sasha, 18, a freshman at the University of Michigan, says she is “excited for her to be proud of what she has done.” They also praise her for being able to raise them as well as she did in the public eye.

This is the third project the Obamas have released as part of the multi-year production deal their company Higher Ground – perhaps named for Michelle’s oft-quoted dismissal of Trumpism: “when they go low, we go high” – struck with the streaming giant in 2018. It covers “scripted series, unscripted series, docu-series, documentaries and features that highlight issues and themes ” that have always mattered to the couple.

The first, American Factory, a film that examines the culture clash when a Chinese billionaire opens a factory in a former General Motors plant in Ohio and hires 2000 locals, won the Oscar for best documentary feature this year. The second, Crip Camp, A Disability Revolution, is described on the Netflix website as the true story about how “a ground breaking summer camp galvanizes a group of teens with disabilities to help build a movement, forging a new path toward greater equality.”

Netflix viewership numbers have dominated during the COVID-19 lockdown through a buzzy slate of programming that speaks to America’s polarized alternate realities. Hillary, a rueful, four-part rumination by the woman who should have been President, contextualizes Clinton’s life story through the feminist movement. It sits in the queue with Tiger King, an eight-part docu-series about big cats in captivity and murder-for-hire plots starring protagonist Joe Exotic, a gay country singer and polygamist who ran for both the White House and Governor of Oklahoma as a libertarian.

Ryan Murphy’s seven-part documentary Hollywood mines salacious tales of historical and fictional characters in the town’s post-war Golden Age as they search for sexual freedom and racial equality, while in ESPN’s The Last Dance is a 10-part documentary that follows Michael Jordan and the Chicago Bulls franchise on their fraught quest for a second three-peat during the 1997-1998 NBA season. Twitter lit up when Barack, a rabid basketball fan who gave commentary in the documentary, was identified only as a “former Chicago resident.”

As much as the Obamas, Jordan and that other Chicago 80s and 90s success story, Oprah – who like Michelle has been touted as a possible 2020 political saviour – have become symbols of black exceptionalism, the former first couple have rejected the notion that they are somehow special. They have often said that many more members of African-American community could achieve success if they had the opportunity to pursue an education the way they did.

But just as the Gatorade ad featuring Jordan and the slogan “Be like Mike” was internalized by millions, so many more – including the current first lady Melania Trump, who has plagiarized Obama twice – want to be like Michelle.

“My journey has taught me that if we stay open – if we share what’s important to us and listen carefully to what others share about their own lives – we find our strength, and we find our community,” Obama posted on Instagram when she introduced the Becoming documentary’s trailer.” I am so grateful to everyone who has shared their story with me over the years. They have inspired me, given me strength, and helped me find my way. I hope you enjoy the film and that it reminds you of the power and importance of your own story.”