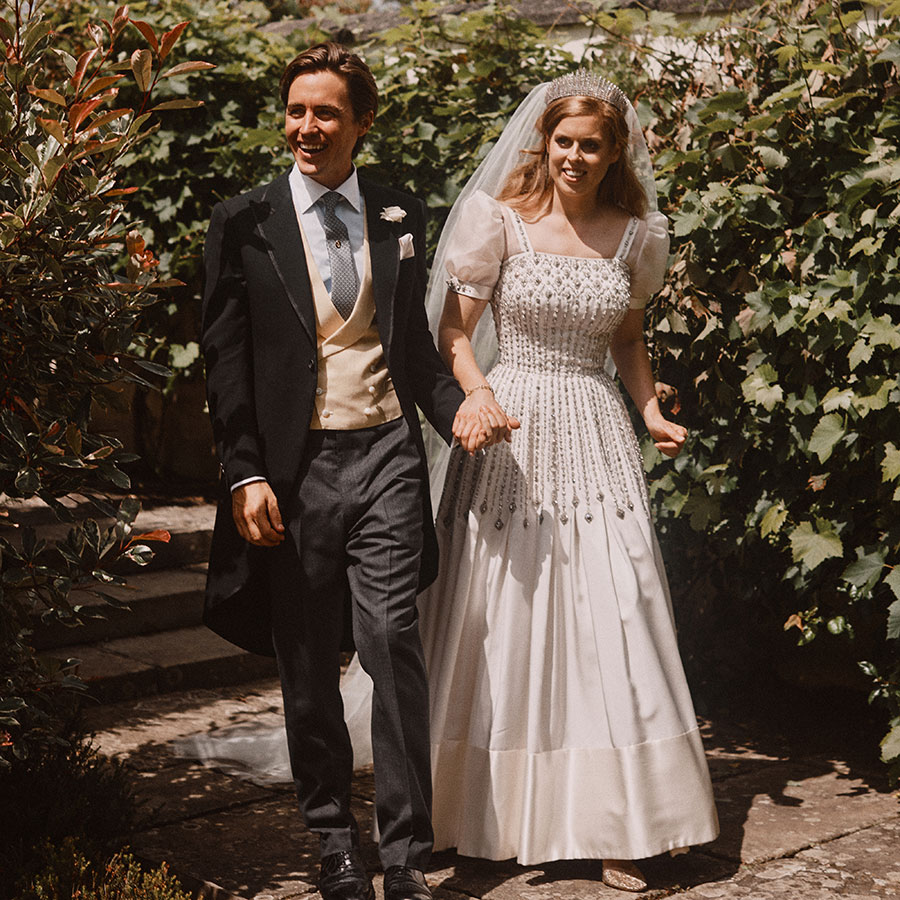 Princess Beatrice pulled off a major wedding fashion moment, in the middle of a pandemic no less. The big reveal came at her private, surprise wedding on Friday to Italian nobleman and property developer Edoardo Mapelli Mozzi, from which a handful of pictures were released by Buckingham Palace, in stages, over the weekend.

In this case, the small number of official photos revealed so much more than the landslide of imagery and televised extravaganzas of the typical royal wedding. Beatrice had been granted the honour of wearing a storied vintage Norman Hartnell gown borrowed from her grandmother, the Queen. She also wore the Queen Mary Fringe Tiara, a stunner worn by the Queen herself on her own wedding day in 1947, and also by her only daughter, Princess Anne, at her first wedding in 1973.

The couple’s original nuptial date was May 29, and they had planned to celebrate with hundreds of guests at the Chapel Royal at St. James’s Palace. But instead of postponing, as previously announced, the decision was made for a very COVID-appropriate micro-wedding, with just the couple’s immediate family present, involving fewer than 20 people all tolled to conform with government guidelines.

The location for Friday’s service, which featured prayers and music but no singing of hymns (also in accordance with COVID advice) was the intimate Royal Chapel of All Saints at Royal Lodge, Windsor, near to both the childhood home of the bride and Windsor Castle, where VIP guests, the Queen and Duke of Edinburgh have been seeing out quarantine. The monarch and consort are set to head off to their summer residence at Balmoral, and Beatrice’s wedding is thought to have been timed around the Queen’s schedule. The entire mood of the affair reflected the national (and international) mood. Beatrice demonstrated a sense of solidarity with the message of recycling and sustainability with Granny’s vintage gown (albeit a very glamorous one fraught with deep royal and personal meaning). The Queen herself invoked Vera Lynn’s wartime classic “We’ll Meet Again” in her speech to her subjects early on in the pandemic, providing reassurance the British Keep Calm and Carry On traditional stoicism would lead the nation out of this dark time. By eschewing the opulence of a new designer gown, Beatrice picked up the thread of the story of Elizabeth, who collected ration cards for her own wedding dress back in the day. But most importantly this private wedding plan also managed to neatly sidestep a number of thorny issues — most glaringly the bride’s disgraced father, Prince Andrew.

With this brilliantly orchestrated simple and chic power move, the “poor Bea ” narrative has been firmly put to rest. The eldest daughter of The Duke and Duchess of York has long been dragged by the press, starting from “those hats” — as in the extravagant fascinators the York sisters wore to William and Kate’s wedding in 2011. Beatrice’s forehead-swallowing puce bow in particular drew ridicule.

There was also the plot point of her (younger) sister, Eugenie’s big Windsor Castle wedding in the fall of 2018, just before Prince Andrew was relieved of his royal duties in the aftermath of his ghastly BBC interview in November amid his association with the late, alleged pedophile Jeffrey Epstein. The shadow hanging over the Duke has only grown darker and more ominous recently.

Pointedly, the bride’s parents did not appear in any of the photos released thus far. (Sarah, though divorced from Andrew since 1996, has stood firmly beside her man; this marks the second time the flame-haired duchess has been banished from the royal spotlight after having worked her way back into the fold in recent years.) This indicates how firm the palace has become about keeping him from appearing in any official capacity in public. The newly married couple were shown only with the bride’s proud grandparents, the Queen and the Duke of Edinburgh. Beatrice is the last of their six adult grandchildren to marry; the Earl of Wessex has two minor children. Which brings us to The Dress. By loaning a special gown and an even-more-special tiara to Beatrice, the Queen showed her support of her granddaughter, loud and clear. It also drew a special connection of the princess with two monarchs, Queen Mary and Queen Elizabeth, whose style she is emulating.  The 31-year-old princess, whose full name is Beatrice Elizabeth Mary,  appears to have grown into her grandmother’s style by wearing her dress and Queen Mary’s tiara.

Norman Hartnell received a royal warrant in 1957; he made the Queen’s own wedding and coronation dresses, as well as Princess Margaret’s wedding dress. The monarch often wears white for formal occasions, and this dress, first seen at a state dinner in Rome in 1961, is a wonderful example of the signature style Hartnell developed for Her Majesty: a fitted bodice and flared skirt with diamante embroidery. In this case, the Peau De Soie taffeta ivory dress was trimmed with ivory Duchess satin and a geometric checkered bodice.

Originally it featured slim straps, but was transformed to bowed straps for a later appearance the Queen made in it, to the premiere of Lawrence of Arabia in 1962 and for the Opening of State Parliament in 1966, when she paired it with the crimson velvet ceremonial robe.

Ahead of Beatrice’s big day, the Queen’s dresser, Angela Kelly and dressmaker Stewart Parvin made a few adjustments, adding organza puff sleeves and shortening the hem, which had been more of a ball pouf in Elizabeth’s outings in it.

As the Telegraph says, “These three outings epitomize how this striking gown was a kind of uniform for Her Majesty, created to be versatile for the many facets of her unique role. It evokes grandeur and duty, but will now be imbued with more personal feelings of love and grandmotherly pride thanks to its reinvention as a poignant bridal dress for Princess Beatrice.” The Queen Mary Fringe Tiara was created by Garrard for Queen Mary in 1919, using stones from a necklace she was given by Queen Victoria on the occasion of her own wedding. There was some drama on the day of the Queen’s wedding, when the band snapped as she was getting dressed! A swift trip to the Garrard workshop saved the day.

The transformation of Beatrice (and Eugenie) into style players has been in the works for some time. Last fall, Edward Enninful, editor-in-chief of British Vogue, profiled the sisters in a favourable and fashionable article and portrait shoot in the magazine’s September issue.

Then Eugenie made a bold statement with her Peter Pilotto and Christopher de Vos wedding gown, featuring a low-cut back to make a statement about self-acceptance by showing scar’s from her childhood scoliosis surgery. Later she hit a chic note in her second wedding dress, a simple blush piece by Zac Posen.

The York sister’s less flashy dressing also fits well into the new narrative Prince Charles is trying to carve out for the newly slimmed-down royal family featuring his direct heirs. Even so, this shows that they are still direct blood princesses and heirs.

One exuberant element of the wedding was the flowers. Beatrice must have been thinking of Instagram with the enormous floral arch she and Mapelli Mozzi were photographed under. Typically, royal brides go for very simple white and green bouquets as well as overall floral décor. Beatrice, restricted in so many ways, let loose with flowers in a variety of pink hues. Her bouquet, which was later laid per tradition on the Tomb of the Unknown Warrior, featuring trailing jasmine, pale pink and cream sweet peas, royal porcelain ivory spray roses, pink O’Hara garden roses, pink wax flower and baby pink astilbe. The traditional royal touch of a sprig of myrtle was not forgotten.

Now ninth in line to the throne, Beatrice is currently employed as VP of partnerships and strategy at a tech company called Afiniti; she also holds a number of charity patronages though performs no official royal duties, and does not receive royal security (a sore point for her father, who had fought for more recognition for his girls before his own troubles silenced and sidelined him).

Upon her marriage she became Princess Beatrice, Mrs. Edoardo Mapelli Mozzi. She will no longer use House of York in her name. She also takes on a new role, that of step-mother to Mapelli Mozzi’s 4-year-old son Christopher, known as Wolfie. The child’s mother is his former fiancé, Dara Huang, and American architect.

Beatrice will also become a Contessa, or Nobile Donna, as Edo (the groom’s nickname) is in line to become a Count on the death of his father, Count Alessandro Mapelli Mozzi. The title comes with an ancestral seat, in the form of the 18th century Villa Mapelli Mozzi palace in the north of Italy. The groom’s mother is Nikki Williams-Ellis, who is married to the sculptor David Williams-Ellis, who both attended the micro-wedding.

In addition to the title, Beatrice will be able to indulge her fashion tastes well in the future, as “multi-millionaire” Edo is CEO of his own development company, called Banda, and described by the British press as “hugely successful.”

All around, the royal wedding this past weekend was a true coup of good taste and old-fashioned values made modern, modelling empathy and a fresh start amid such trying times.

All the Highlights from Princess Eugenie’s Royal Wedding