Peter Frampton, 70, Talks Rock Superstardom, His Rare Muscle Disorder and New Memoir, ‘Do You Feel Like I Do?’ 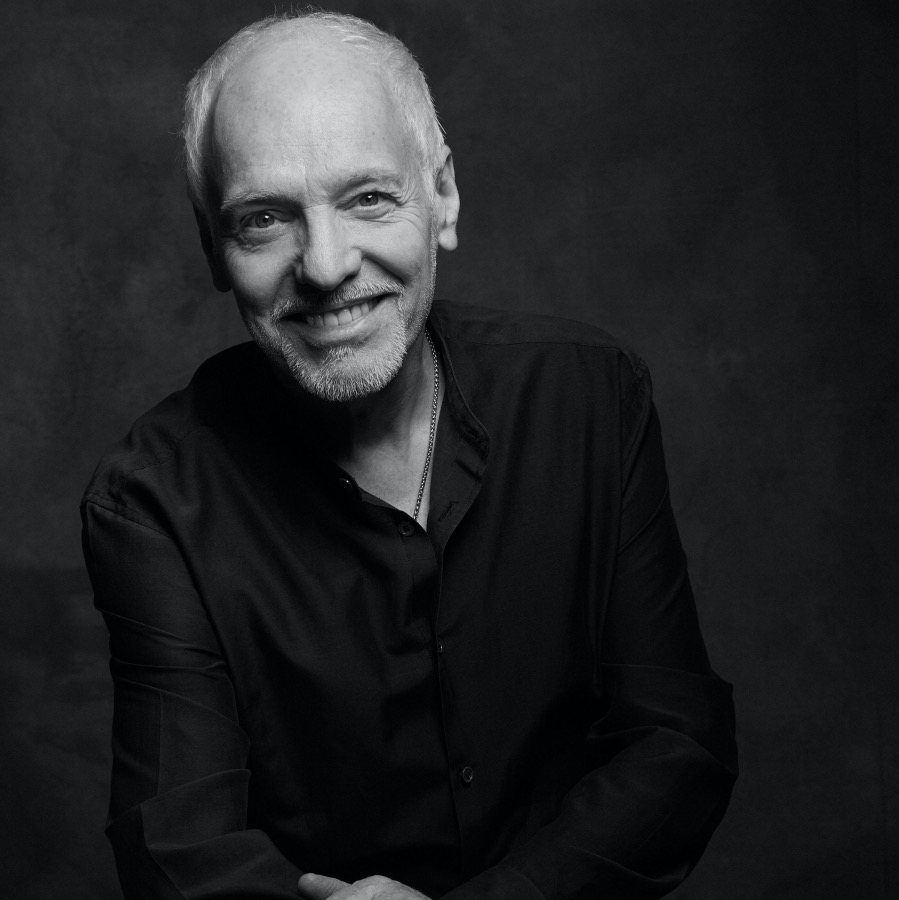 Legendary rocker Peter Frampton talks to Zoomer about his life, career, battle with a rare muscular disease and his new memoir, 'Do You Feel Like I Do?' Photo: Austin Lord

For all the accolades and celebratory words written about Peter Frampton over the years — music legend, one of rock and roll’s greatest guitar players, the performer behind arguably the most famous live album of all time — his fantastic sense of humour hardly gets enough play.

Speaking on the phone from his home in Nashville recently about his new memoir, Do You Feel Like I Do? — a frank, hilarious, entertaining and honest read — out this week, he reflects on his life and career in the context of the book.

The page count is an exaggeration, but the part about a front-loaded life and career is true. Frampton, 70, was schoolmates with David Bowie — one of his earliest influences. As a teen he befriended former Rolling Stone bassist Bill Wyman and enjoyed musical success with bands like The Herd and Humble Pie before branching out on his solo career. And in 1976, at age 26, he was launched into the rock and roll stratosphere with the release of his legendary double-album, Frampton Comes Alive! — which contained the mega-hits “Baby, I Love Your Way,” “Show Me the Way,” and “Do You Feel Like We Do.” The album topped music and sales charts, but the follow-up proved most difficult.

His next albums didn’t resonate as much with his fanbase, he starred in the widely-panned Sgt. Pepper’s Lonely Hearts Club Band film and suffered multiple broken bones in a car accident in 1978, after falling asleep at the wheel and crashing his car in the Bahamas. But he never gave up and in the four decades since has continued releasing albums — including winning a 2007 Grammy for Best Pop Instrumental Album for his album Fingerprints — recording with other artists, playing himself on various television shows like The Simpsons, touring and even releasing a funny handwashing how-to video during the pandemic. “I don’t believe if I hadn’t had to pay my dues over and over again that we’d be sitting here talking today,” Frampton explains. “I just think that I definitely am a much better person for having gone through that. I’m going to make mistakes for the rest of my life, like we all do. I’m not perfect. None of us are, but I do feel that … I’m in the best possible place I could possibly be as far as what I’ve been through and what my career has led me to through the ups and downs.”

Frampton’s most recent challenge — which he also discusses in the book — is his battle with inclusion body myositis (IBM), described as, “a progressive muscle disorder characterized by muscle inflammation, weakness, and atrophy.” The condition, which is rare and has no cure, usually appears in people over-50 and can affect the muscles in the arms, legs and fingers, among other parts of the body. For Frampton, it prompted a retirement tour — the U.S. leg of which he completed in 2019. The U.K. leg was scheduled for this year but, as with so many other plans, was postponed due to the COVID-19 pandemic. Frampton can’t say whether he’ll ever get to embark on the final leg of the tour — “the COVID clock is also my IBM clock, because the longer it goes on, the more chance there is of more progression with the weakness in my muscles. And it has progressed” — but it hasn’t stopped him from writing and recording new music or releasing his memoir.

Of course, when asked about which is more nerve-wracking — releasing new music or a memoir — the answer is simple.

“Releasing a memoir,” he laughs. “Absolutely. Releasing music, I’ve done it so many times and I go through the same thing over and over again, hopefully getting better … The book — my life is now an open book. So yeah, it’s nerve-wracking.”

Over the course of our conversation Frampton discussed his new memoir, favourite memories with famous friends, why he doesn’t take himself too seriously and advice to older people who worry they may also be struggling with IBM.

MIKE CRISOLAGO: The book, aside from being quite funny, is also very genuine and honest.

PETER FRAMPTON: Oh, thank you. I’ve been working on it, I guess, coming up to a year. And for the last year I’ve relived my life every day. [Laughs] Like, oh my God. So yeah, talk about opening up cells in your brain that you haven’t used for so many years and things you hoped you’d buried.

MC: I always wonder when I read a memoir like this — in going back through your life, what did you learn about yourself?

PF: I have learned about myself that maybe one of the reasons why I’ve always pushed myself — when I’ve fallen, I’ve brushed myself off and got up again — is that I’ve never given myself credit for being as good as I am. I’ve never thought I’m good enough to this day. I mean, I’m facing another part of my life now where what I was given as a gift is being taken away from me [via IBM].

MC: What does that mean, that you thought you were never good enough?

PF: I’ve never given myself enough credit for when I do do something really good. And I know it at the time, but then that’s not good enough for me. Then I’ll say, ‘Well, yeah, but I can do it better than that.’ It’s just this perfectionist thing in me, that’s given me the ups and downs as well. And I’ve learned recently that I can’t do everything myself …I think I’m learning a lot about myself from writing the book. I’m sure everybody that writes a memoir goes through the same thing. Should I leave that in? Should I take it out? What will they think? So it was very much a learning curve.

MC: In the book you share fascinating stories about some of your famous friends and notable encounters, from David Bowie to Eric Clapton, Bill Wyman, Alice Cooper and so on. When you look back, what memory holds a particularly special place in your heart?

PF: I would have to say that meeting George [Harrison] for the first time and, within 20 minutes, I was playing on the session [for Doris Troy’s eponymous 1970 album]. That’s the most amazing encounter I’ve ever had and led to so much more in my life, you know? From friendship with George and Ringo and Nicky Hopkins and Klaus [Voormann] — all these wonderful musicians. And it happened in literally in 20 minutes. Three weeks later, a month later, is when George called me back and asked me to play on All Things Must Pass. It’s mind blowing when you think about that.

MC: You note in the book that you’ve written and recorded songs for an upcoming solo album. At this stage of your personal and professional life, where do you glean creative inspiration? And, is it from a different place than it was earlier in your career?

PF: Well, I think that, obviously, lyrically, being inspired by what the hell is going on [in the world]. [Laughs] I’ve become much more aware. I was never that political earlier on in life. And then obviously I was political later on. And then with this president, it’s like we’ve got, you know, Mussolini’s up there. Really, he even looks like him. [Laughs] I think he practices that Mussolini pose in the mirror … My inspiration comes from everyday things that happen — the people, about us, about our liberties, the things that are being taken away. It’s just mind boggling right now what’s happening. So it’s hard not to be influenced by that.

MC: The book also includes a lot about your battle with IBM, including a story about a man who didn’t realize he had IBM until he heard you discuss it. And that is a nod to your belief that many others —especially older people — may be suffering from it and not realize it.

PF: IBM for me, the first place I noticed it was my legs. I think I described in the book how I couldn’t hike up the hill as fast as my son anymore. And what do you say when you’re in your late fifties, early sixties? You go, ‘This is what getting old is all about.’ And wrongly, but I did not know at the time. And then it got worse and worse and then, due to [suffering] falls, I was diagnosed. I’m not privy to the other myositis symptoms because I’m sort of wrapped up in this one, but with me it was the legs first and then the arms. I think going up and down stairs is where you first notice the problem. Going up’s alright. Coming down is much more treacherous. It’s using different muscles and I don’t have those, or I have very little of those. So if you have trouble walking up and down stairs and you’re feeling weak in the knees, you should have your regular doctor recommend a neurologist and go be tested. It’s also asymmetrical, meaning that — again, I described in the book — how my doctor made his final discovery and diagnosis was after he had me jump on one foot 10 times and then jump on the other foot. The right foot I could have done it all day. The left foot I could barely do six, and with difficulty.

MC: And earlier you mentioned the lessons you learned about yourself as far as your resilience while writing this book. Does that help you as you move forward into this next stage of your life and the challenges it brings?

PF: Yes, because whether I can, in the end, play music, I will still be writing music. And, also, I started a little film company, Phenix Films, with my keyboard player, one of my best friends Rob Arthur. And we’re doing my documentary, which is on hiatus right now because of you know what. But we filmed the whole of the finale tour backstage and on stage. So we have a lot of footage. And the handwashing video that I did a while ago right at the beginning of the pandemic. That was the start of it actually. And then Rob and I got together and said, ‘We’re doing good here. Let’s make this something even more from this.’ And that’s when we decided to start our own film company.

MC: Finally, what do you hope readers take from your book?

PF: From my book. Oh, I don’t know. [Laughs] I haven’t gotten to the ‘hope’ feeling yet. It’s just the dread. [Laughs] I mean, it’s my story and I am a good storyteller — I do know that. And there’s a lot of funny stuff in there that everyone can relate to, I think. That’s the main thing I’ve learned — that they don’t just want to know how many times you played Madison Square Garden. They want to know how you were feeling after it, and what breakfast was like the day after that. So I think on a human level, I have opened myself up to self-criticism and I think I hope people learn from that — that they don’t take themselves too seriously. I never have. I live a serious life — we all do — but it’s something that you’re gonna make mistakes in this life. None of us are perfect. And I think that’s what I hope they see — that I’m not all up about myself. I was very lucky to have incredibly good parents. So I think it all goes back to the way I was brought up and to admit when you’re wrong.

Do You Feel Like I Do? is available in stores and online now.