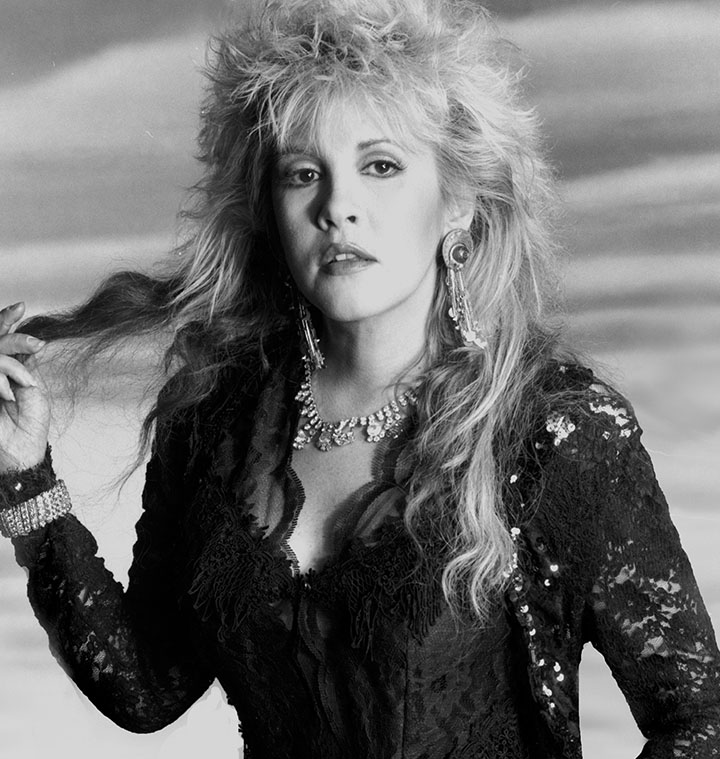 Stevie Nicks, seen here in a photo from 1987, is the only woman to be inducted into the Rock and Roll Hall of Fame twice. Photo: Aaron Rapoport/Corbis via Getty Images

Though originally founded in 1983 — and given a brick and mortar home in 1995 — the Rock and Roll Hall of Fame inducted its inaugural class 35 years ago this week, on January 23, 1986. The line-up, predictably, included foundational figures in the history of the music genre, including Chuck Berry, Little Richard, Elvis Presley, Fats Domino, James Brown, Buddy Holly, Jerry Lee Lewis, Ray Charles, Sam Cooke and the Everly Brothers.

However, over the years the Rock and Roll Hall of Fame has grown to include inductees from multiple musical genres — including hip hop, R&B and Gospel — and has also drawn criticism for who isn’t yet inducted. Tina Turner, for example, is only in with Ike Turner and not as a solo artist — despite her solo career eclipsing her early work with her abusive ex-husband — while talents like Dolly Parton, Joe Cocker, Willie Nelson, Phil Collins, Foreigner and others await the call (in fact, there’s a whole website dedicated to those music legends who haven’t received induction yet).

So, to mark the Rock and Roll Hall of Fame’s 35-year history of inductions, we’re revisiting some of the most shocking and fascinating facts about those who’ve been celebrated — or snubbed — in this musical institution.

As NPR reported, journalism professor and music writer Evelyn McDonnell researched the Hall of Fame and discovered that, out of 888 total inductees, less than eight per cent (only 64 inductees) were women.

As you may have noticed, all of the original class of inductees were men. It wasn’t until 1987, the second year of inductions, that the Hall gained its first female entrant: the Queen of Soul, Aretha Franklin.

Stevie Nicks, meanwhile, is the only two-time female inductee, going in as a member of Fleetwood Mac (1998) and as a solo artist (2019). For comparison, 22 men have been inducted more than once.

Nicks, who received her second induction at the same 2019 ceremony as Jackson, noted in a CBS interview that, “It’s 22 men that are in twice for their solo work and being in a big band and no women. Until me. So I feel that I definitely broke a big rock and roll glass ceiling.”

Aside from Tina Turner and Dolly Parton, both mentioned above, other notable female omissions from the Rock and Roll Hall of Fame include Cyndi Lauper, Barbara Streisand and Chaka Khan among many others.

When One Induction Just Won’t Do

Eric Clapton holds the record as the only three-time inductee into the Rock and Roll Hall of Fame, going in with The Yardbirds (1992), Cream (1993) and as a solo artist (2000). The Beatles, meanwhile, are one of the few bands where each member was inducted twice, with Ringo Starr holding the distinction of having the longest time between two inductions. He went into the Hall with the Beatles in 1988 and then again, 27 years later, as a solo artist in 2015.

But it’s Stephen Stills who may have pulled off the most impressive feat. Not only did he receive two Hall of Fame inductions, but he got both on the same night. Yes, Stills went in twice in 1997, both as a member of Buffalo Springfield and of Crosby, Stills and Nash.

The Beatles and Rolling Stones Vie for Song Writing Supremacy

The debate over which band is better — the Beatles or the Rolling Stones — will never be fully resolved. And both bands, of course, are in the Rock and Roll Hall of Fame, with the Fab Four gaining entry in 1988 and the Stones a year later.

The Rock and Roll Hall of Fame, however, doesn’t only induct people. It also enshrines songs.

When it comes to song writing, the Beatles and The Rolling Stones are tied for most songs inducted into the Hall by a band, with eight apiece, followed by the Beach Boys and Led Zeppelin with five.

But when you break it down to individual songwriters, it’s perhaps no surprise that the Beatles come out on top. Of all songwriters, John Lennon has the most tunes inducted into the Hall — counting his work as a Beatle, a solo artist and with the Plastic Ono Band — with 11. Paul McCartney is next, with nine (counting his Beatles and solo work), followed by Elvis Presley with seven, and then Neil Young, David Crosby, Chuck Berry, Bob Dylan, Bruce Springsteen and Stevie Wonder with five each.

Artists Who Want Nothing to Do With the Hall of Fame

As long as there’s been a Rock and Roll Hall of Fame, there’s been stars who want nothing to do with it. In 1994, for example, Jerry Garcia refused to attend the induction ceremony for The Grateful Dead, so the band hilariously brought a cardboard cut out of him to the event.

In 2006, meanwhile, both the Sex Pistols and Ozzy Osbourne rebuked their Hall nominations. Sex Pistols lead singer John Lyndon, known as Johnny Rotten, wrote a note that was read on stage by Rolling Stone founder — and Hall of Fame co-founder — Jann Wenner as he inducted the band. The letter called the Hall “a piss stain” and declared, “You’re anonymous as judges, but you’re still music industry people. We’re not coming.”

Osbourne, meanwhile, was also slated for induction in 2006 with the band Black Sabbath. But he’d written a letter to the Hall years earlier that stated, “Just take our name off the list. Save the ink. Forget about us. The nomination is meaningless, because it’s not voted on by the fans. It’s voted on by the supposed elite for the industry and the media, who’ve never bought an album or concert ticket in their lives, so their vote is irrelevant to me. Let’s face it, Black Sabbath has never been media darlings. We’re a people’s band and that suits us just fine.”

By the time 2006 came around, however, Osbourne agreed to attend.

And Axl Rose also famously rebuked his induction with Guns N’ Roses in 2012, writing, “I strongly request that I not be inducted in absentia and please know that no one is authorized nor may anyone be permitted to accept any induction for me or speak on my behalf. Neither former members, label representatives nor the Rock and Roll Hall of Fame should imply whether directly, indirectly or by omission that I am included in any purported induction of ‘Guns N’ Roses.’”

As Ultimate Classic Rock notes, Rose’s refusal to be inducted is rooted in the idea that, “being inducted as part of a Guns N’ Roses line-up that’s completely different to the one he now fronts would put him in a ‘damned if I do, damned if I don’t’ position.”

Of all the stars and acts that haven’t been inducted into the Rock and Roll Hall of Fame, the Monkees remain one of the most divisive. Countless articles have been written about whether or not the band deserves inclusion in the Hall, which they currently are not a part of — they’ve never received a nomination — despite being one of the biggest-selling bands in music history.

Late band member Peter Tork told Page Six in 2007 that he believed the Monkees were “single-handedly” being kept out of the Hall by Jann Wenner. Still, he added his belief that Wenner, “doesn’t care what the rules are and just operates how he sees fit. It is an abuse of power. I don’t know whether The Monkees belong in the Hall of Fame, but it’s pretty clear that we’re not in there because of a personal whim.”

The Hall claimed in the Page Six story that Wenner’s influence does not extend to keeping acts from being honoured with inductions.

Still, the article also noted Tork’s belief that the band isn’t in the Hall because they didn’t play their own instruments on some of their albums.

“Jann seems to have taken it harder than everyone else, and now, 40 years later, everybody says, ‘What’s the big deal? Everybody else does it,’” he told Page Six. “Nobody cares now except him. He feels his moral judgment in 1967 and 1968 is supposed to serve in 2007.”

Meanwhile, another band member, Micky Dolenz, brushed off the lack of inclusion in the Hall in an interview with Billboard in 2018, noting, “I don’t want to sound flippant, but I never cared one way or the other about that — or about, frankly, any other accolades or awards.”

He did add, though, his belief that “the Rock and Roll Hall of Fame is like a private country club, and ‘We’re not gonna let in who we don’t want in our club.’ It’s their prerogative. So I’m not going to chase it.”