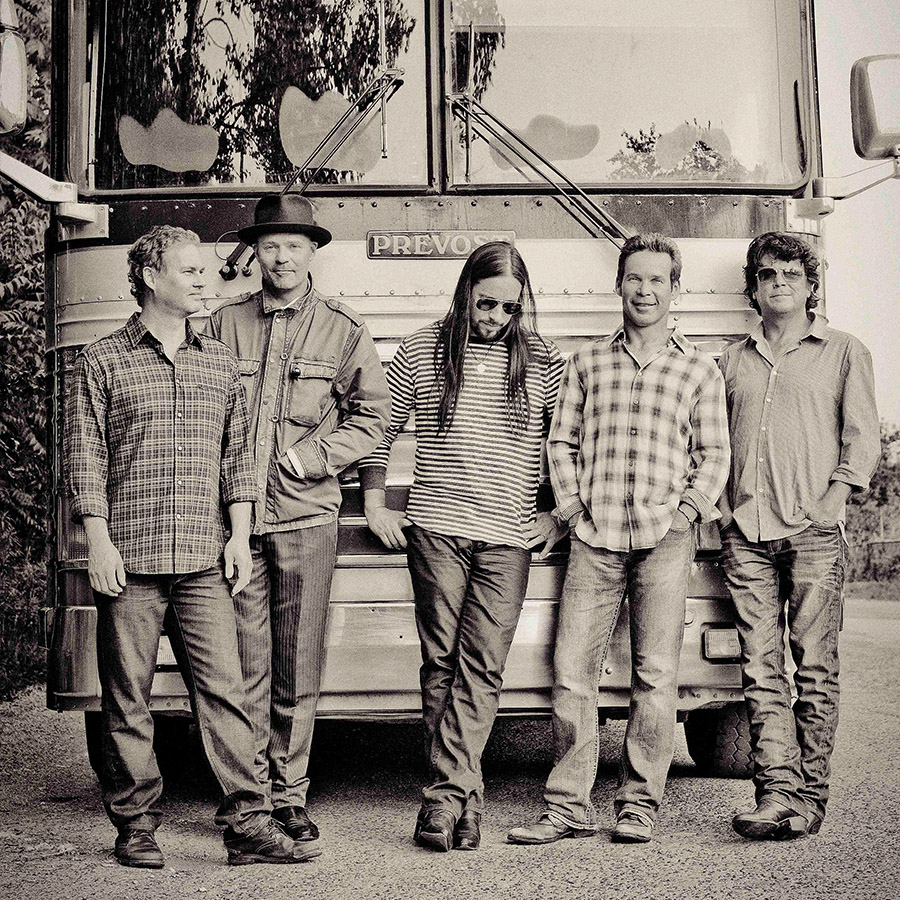 The Tragically Hip surprised fans Thursday morning with the announcement of their new album Saskadelphia, arriving nearly four years after the death of lead singer Gord Downie and three years after the band announced their retirement.

The new album dropped on Friday, May 21, with the band officially launching it via a SiriusXM broadcast titled The Tragically Hip Summer Kick-Off Town Hall. It features a performance of “Montreal,” recorded live during the band’s Montreal concert in 2000, as well as five unreleased songs originally intended for The Hip’s 1991 Road Apples album, each of which were “pulled from the fire” in more ways than one.

According to the band, they had originally recorded the songs in 1990 for a double album with the working title Saskadelphia — a reference to the extensive touring they were doing in the early 1990s. But their American record label at the time pushed for a single disc, shelving the extra tracks and rejecting the title.

“I remember seeing this Church of the Christadelphians and thought about how part of it could be crafted onto any other word,” Drummer Johnny Fay explains on the band’s website. “We were touring a lot, going from New York and Boston to Philadelphia and Saskatoon. It seemed like the clubs were the same size, and you could be anywhere. So, we crafted one part of a Canadian city onto an American one.”

Fay says the record label thought Saskadelphia was “too Canadian, so we suggested Road Apples instead, which they loved because they didn’t understand the reference. We couldn’t get more Canadian than that and got laughs about it for years.”

As the band explains in “The Story of Saskadelphia,” an article by Observer journalist Lindsay Pereira posted to the band’s webpage, the recordings were thought to be among the thousands by various artists lost in a 2008 fire on the Universal Studios backlot. Instead, the tracks were serendipitously sent back to Canada in 2001 and discovered by the band’s surviving members last summer.

“We knew we had a lot to look for because we recorded a lot back then. We didn’t know what was there,” Fay told Pereira. “So this meant baking them and listening to them as they were being transferred, hearing them for the first time in 30 years. It was crazy.”

Fans of the iconic Canadian band welcomed the announcement on social media, with many expressing how much the release means as they cope with the ongoing pandemic.

“This is one of those uplifting moments that keep me going during this very difficult year,” Mike McIntyre posted in the thread of the announcement on twitter. “What a fantastic surprise to wake up to today. Thanks boys, can’t wait to listen to it when the clock strikes midnight!”

Among the new releases are “Ouch,” which is filled with the familiar roaring vocals of the band’s beloved singer and lyricist Downie — who died in October 2017 at the age of 53 after a battle with brain cancer — and “Not Necessary,” a track that brims with the band’s signature sound.

“I went ‘Wow’ when I heard ‘Ouch’ after all this time,” the band’s guitarist Rob Baker says on the band’s webpage. “We were a pretty good little band.”

The live recording of “Montreal,” a song about the École Polytechnique massacre of 1989, brought back memories for Baker as well.

“That night, it was suggested we could play ‘Montreal’ and I was in the dressing room. I ran through it to make sure I knew it, but there were questions about whether we would pull it off,” Baker says of the concert in the same story. “Gord Downie wasn’t sure about the lyrics, so a road manager pulled them up on the Internet. He did a quick once over and said, ‘OK, we got this.’ Then, we went out and played like we had been playing it forever.”

As for the newly unearthed tracks’ potential for inspiring any new music from the band, bassist Gord Sinclair indicated the album would be their last release.

“We are, sadly, never going to have the chance to put out new stuff,” he says in the band’s website post. “For us, in our minds, this is new.”

The Tragically Hip are set to receive the 2021 Humanitarian Award at the 50th Annual JUNO Awards on June 6.

Courage: The Life And Legacy Of Gord Downie