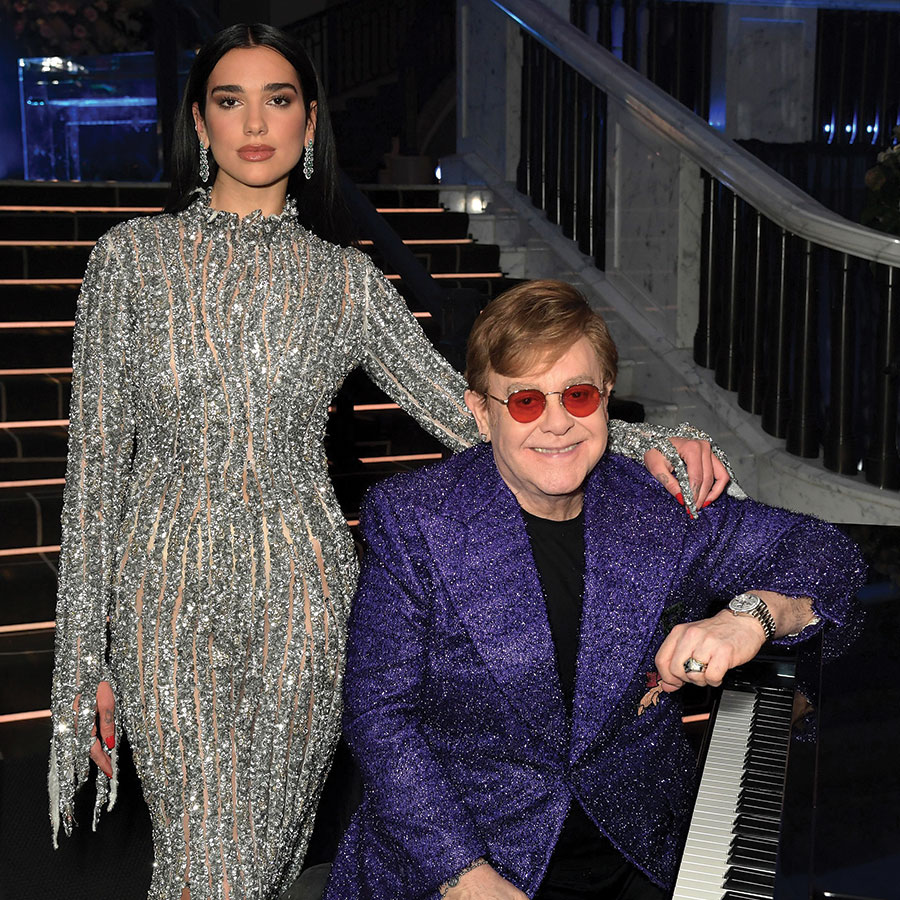 Elton John is back with a new album, but fans expecting a traditional record from the Rocketman may be in for a surprise.

The Lockdown Sessions, which John, 74, announced via social media on Wednesday, sees the rocker tap into multiple generations and genres with over 20 collaborations, including the first single off the album “Cold Heart” with Dua Lipa, as well as tunes with Brandi Carlie, Gorillaz, Lil Nas X, Miley Cyrus, Nicki Minaj and legends like Stevie Nicks, Stevie Wonder, Eddie Vedder and a posthumous duet with Glen Campbell.

The inter-generational effort, which drops Oct. 22, came as the fruit of lockdown creativity, which John noted during the album announcement.

“The last thing I expected to do during lockdown was make an album. But, as the pandemic went on, one-off projects kept cropping up,” he said in the caption of the album announcement on Instagram.  “Some of the recording sessions had to be done remotely, via Zoom, which I’d obviously never done before. Some of the sessions were recorded under very stringent safety regulations: working with another artist, but separated by glass screens. But all the tracks I worked on were really interesting and diverse, stuff that was completely different to anything I’m known for, stuff that took me out of my comfort zone into completely new territory.”

Still, John said there was “something weirdly familiar about working like this,” harkening back to his earliest professional musical roots.

“At the start of my career, in the late 60s, I worked as a session musician,” he said in the same Instagram post. “Working with different artists during lockdown reminded me of that. I’d come full circle: I was a session musician again. And it was still a blast.”

According to a press release announcing the album, the eclectic mix of collaborations on the album was born out of the rock legends Apple Music show, Rocket Hour, a podcast where he chats with the music industry’s rising stars.

In an Instagram video post discussing the album, John says after working with Miley Cyrus on a cover of the Metallica hit “Nothing Else Matters” — which features Andrew Watt, Yo-Yo Ma and Robert Trujillo — he developed a “bucket list” of artists he wanted to work with.

“The songs vary so much,” John says in the video post. “It’s just a dream come true.”

While John traverses new territory in the genre-hopping album, fans can still expect a level of familiarity. For instance, his track with pop sensation Dua Lipa, “Cold Heart,” is based on four of John’s own songs: “Kiss the Bride,” “Rocketman,” “Where’s the Shoorah?” and “Sacrifice” — each of which were mixed into the track by PNAU, an Australian music trio who made the remix album of John’s songs, Good Morning to the Night, with the rocker in 2012.

The tune also propelled John onto the Billboard Hot 100 chart for the first time in 21 years (his last appearance was in 2000 for the song “Someday Out of the Blue, from the El Dorado soundtrack), with the song debuting at number 81. It also landed on the Billboard Adult Contemporary chart, extending his number of entries there to a Billboard record 74 hits.

“She’s given me so much energy. She’s a truly wonderful artist, and person, absolutely bursting with creativity and ideas,” he told People. “The energy she brought to Cold Heart just blew my mind.”

Lipa expressed a similar sentiment, calling the collaboration a “creative and joyous experience.”

“Elton is such an inspirational artist and also has the naughtiest sense of humour — a perfect combination. It has been an absolute honour and privilege to collaborate on this track with him,” said Lipa in a press release. “I loved being part of such a creative and joyous experience. Can’t wait to hear it everywhere this summer.”

The new album announcement comes just months after the June reveal of the final dates for John’s Farewell Yellow Brick Road retirement tour, which was interrupted by the pandemic and wraps up in 2022.

Elton John on Diana, Paul McCartney and Other Celebrity Encounters in His New Memoir ‘Me’