Tim Hortons and Justin Bieber’s Timbits: The Most Canadian of Intergenerational Collabs 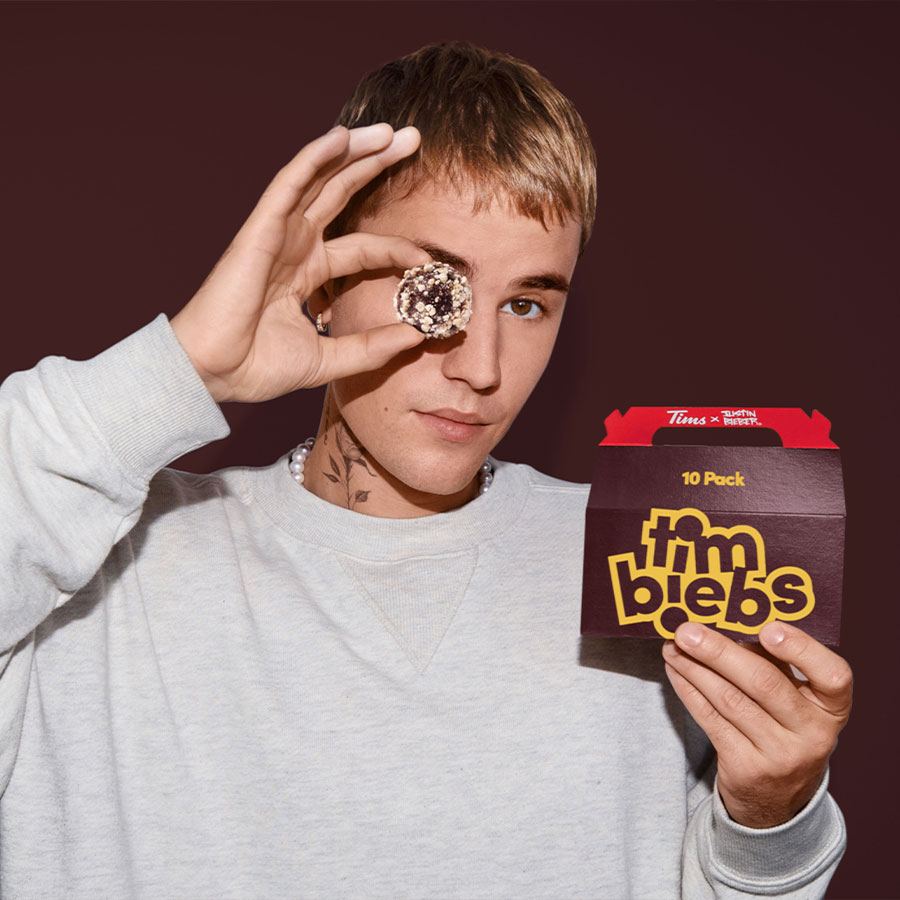 Justin Bieber says his collaboration with Tim Hortons on a new line of Timbits is a dream come true. Photo: Courtesy of Tim Hortons

If we were to tell you that Justin Bieber was endorsing a coffee chain, you’d likely expect the Canadian mega star to direct his young flock of Beliebers to Starbucks or a trendy (and equally expensive) indie coffee franchise in L.A.

Instead, Bieber, 27, is bucking expectations by teaming up with Canadian coffee giant Tim Hortons for a new line of Timbits called Timbiebs. The new flavours, which arrived on Tuesday, include chocolate white fudge, sour cream chocolate chip, and birthday cake waffle. The launch also includes some limited-edition merchandise, including a toque, tote bag and corduroy fanny pack.

While the pairing might seem off-brand at first glance, Bieber, despite being born 30 years after the company’s founding in Hamilton, Ont., is a great fit for the partnership.

First and foremost he’s a fan of the Toronto Maple Leafs, the team on which the company’s namesake and late founder, Tim Horton, started his career as a defenceman in 1947.

The Leafs and Bieber’s “white hot bromance,” as the New York Times calls it, began when he was a boy and has continued into his adult life. He even dedicated his recent hit, “Hold On,” to the Leafs, calling it a love letter to the team — a fitting tribute considering the heartbreak involved in cheering on the team through thick and thin.

And in terms of his allegiance to the coffee chain,  as far back as a decade ago the Biebs tweeted about his longing for a little Tims comfort as he travelled overseas.

“What’s amazing about working with Justin is he has an authentic, lifelong relationship with Tims and he was so invested in working on Timbiebs and our future plans together,” Hope Bagozzi, Chief Marketing Officer for Tim Hortons, said in a press release.

“He knows exactly what our guests already love about the Tims brand and he’s helping us deliver new menu innovations that we know they’re going to love. We’re really looking forward to what’s next.”

While the globally-beloved pop star doesn’t likely make his own “Tims run” these days, he isn’t above advocating for the brand’s faithful coffee guzzlers. In a 2019 Instagram poll, he asked fellow Tims fans if they missed the old lids after Tim Hortons swapped them out to address complaints about the old model leaking.

“I know they could leak but it was easier to drink out of.. the coffee would come out better.. these new lids are uncomfortable on the mouth, and you get very little liquid each drink. It’s a damn outrage and needs to be changed back,” Bieber said in the caption of the poll — which revealed 70 per cent of respondents shared his beef with the new lid —  before suggesting an environmentally friendly option.

“Tbh [to be honest] it shouldn’t be plastic find a way to be recyclable let’s change the world 1 lid at a time,” Bieber added.

The coffee giant responded to thank the musician for his input and informed him that the new lid was made with 100 per cent recyclable plastic.

“We’d love to have you join our team that’s working to make them even better!” the company added in their reply.

While the lid would remain unchanged, the post was evidently the start of an intergenerational partnership, one that’s already payed off for the brand on social media, with  fans showing off their Timbiebs swag.

Meanwhile, the chain’s loyal customer base will likely be the ones to determine whether the new flavours can stack up against classics like chocolate and sour cream glazed.

Either way, something tells us this isn’t the last time we’ll see a Tim Hortons-Bieber mashup.