As ‘Being the Ricardos’ Hits the Big Screen, Why ‘I Love Lucy’ Remains as Relevant — and Funny! — as Ever 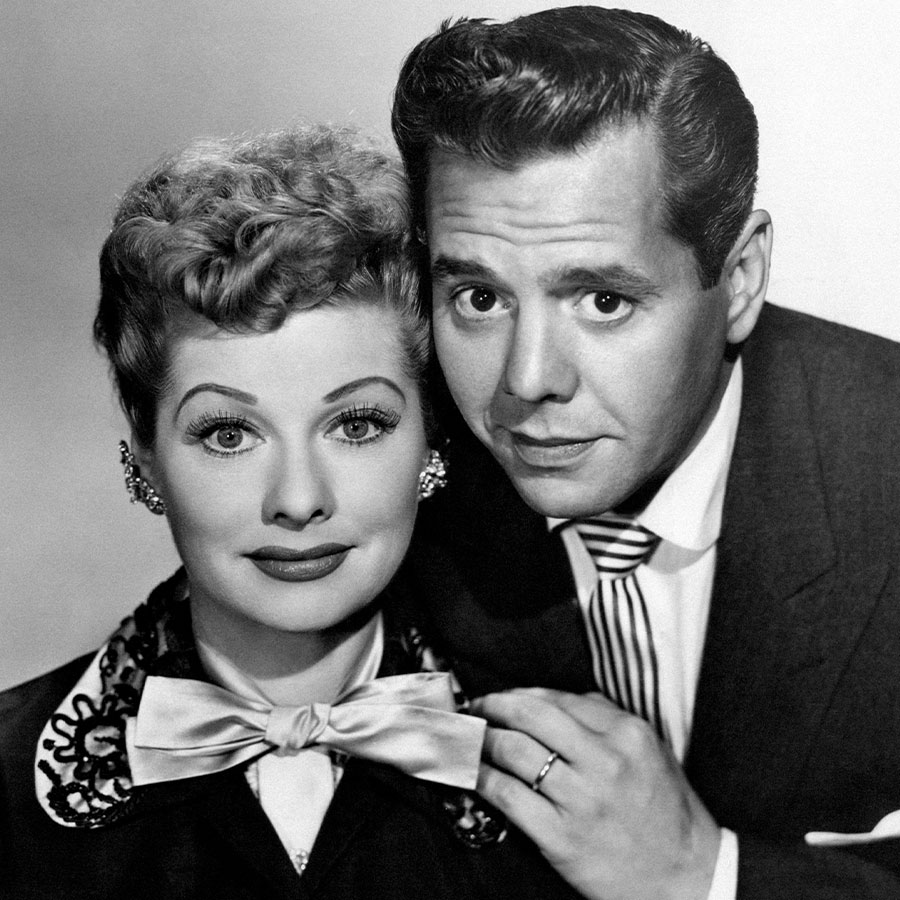 Desi Arnaz and Lucille Ball on the set of 'I Love Lucy,' circa 1950s. Seventy years after the show first aired, there's no shortage of interest in the classic sitcom, from the new biopic "Being the Ricardos" to new generations of fans enjoying reruns of the classic sitcom. Photo: Mondadori / Getty Images

It all started with an anniversary party.

She wanted to celebrate her special day dining and dancing at a popular Manhattan hotspot; he wanted to go to watch the big boxing match.

The dilemma faced by Ethel and Fred Mertz (Vivian Vance and William Frawley) — and, by extension, Lucy and Ricky Ricardo (Lucille Ball and Desi Arnaz) — was hardly a ground-breaking one, but that just might be the key to I Love Lucy’s longevity.

This inaugural I Love Lucy caper — season one, episode one — first captivated audiences 70 years ago this past October and fans the world over have had no shortage of ways to celebrate the milestone anniversary and the empire Ball and Arnaz built through their pioneering Desilu Studios.

A podcast from Turner Classic Movies, The Plot Thickens, is shedding new light on Ball’s life; her long-forgotten 1960s chat show, Let’s Talk to Lucy, has been resurrected for new audiences by SiriusXM; and Ron Howard and Amy Poehler are producing a feature-length documentary on Ball and Arnaz. And, of course, this Friday (Dec. 10) the couple gets the big screen treatment when Being the Ricardos, a new film directed by Aaron Sorkin, 60, and starring Nicole Kidman, 54, and Javier Bardem, 52, opens in theatres.

The highly-anticipated film follows the show’s cast and crew during a particularly tumultuous production week in the mid-1950s: the U.S. House Un-American Activities Committee discovers Ball registered as a Communist in 1936 to please her workingman grandfather; the burgeoning tabloid industry publicly questions Arnaz’s fidelity; and, to cap it off, in an era where pregnant women were rarely seen on television, and the word itself banned from being uttered on screen, Ball, the most popular actress on television, finds out she’s carrying her second child.

It’s enough to bring down the whole house of cards.

A difficult week by any stretch of the imagination, thankfully, for Lucille Ball and Desi Arnaz, these real-life events were spread out over a considerably wider period of time. Director Sorkin has used dramatic license to ramp up on-screen tension, while his comments made promoting the film have raised tensions among “Lucy” fans.

“[I Love Lucy] is not a show that if we took a fresh look at today we’d think is funny,” Sorkin recently told The Hollywood Reporter, spurring a debate on just why I Love Lucy has endured for generations.

“Funny is funny,” says Christina Carroll, 61, daughter of Bob Carroll, Jr, who co-wrote all 181 episodes of I Love Lucy alongside Madelyn Pugh, his writing partner of more than 60 years.

Carroll heard from fans directly in 2015 at the Lucille Ball Comedy Festival, a yearly event held in Ball’s hometown of Jamestown, NY. A two-hour drive from the Canadian border at Niagara Falls, the city boasts two museums dedicated to the lives of Ball, Arnaz, and their iconic show, along with the award-winning National Comedy Center — a living testament to Ball’s legacy.

“I always feel a sense of amazement in my mind and a giant smile on my face that the show is still going,” Carroll adds. “I don’t know if there is a code to crack there, or if we even need to do anything but sit back and enjoy it, but funny is funny.”

The feedback she received from talking with fans young and old mirrors the letters her father received regularly until his death in 2007; audiences saw themselves reflected on screen, particularly members of Latinx and Spanish-speaking communities for whom the Cuban-born Arnaz was someone they could look up to.

Reflecting the audience is just one part of the show’s enduring popularity, according to Tom Gilbert, 66, co-author of Desilu: The Story of Lucille Ball and Desi Arnaz. From the talent brought together on and off screen to technological advancements — including being the first television show to shoot with three cameras on 35mm film in front of a live audience — and inventing the concept of a rerun, it was, Gilbert says, “the perfect storm.”

It’s a show that still makes Gilbert laugh and he attributes this to more than Ball’s talent for physical comedy.

“It’s not the broad stuff that comes out of her mouth, it’s the subtlety. Nobody could do physical comedy the way she could, but without the rest of it, it wouldn’t be believable,” says Gilbert. “That speaks more to her acting abilities than her clowning.”

These abilities were honed over a film career that pre-dated I Love Lucy by nearly 20 years, says James Sheridan, co-author of the book Lucille Ball FAQ.

The 33-year-old Sheridan doesn’t remember a time when he wasn’t a fan of I Love Lucy, and that passion set him on a career path that took him to New York’s Paley Center for Media shortly and, eventually, to his current gig as lead researcher for The Plot Thickens.

“The show wouldn’t last for 70 years if people didn’t think it was funny and the fact there is an audience for Being the Ricardos speaks to that — people find it funny and very young audiences are still discovering it, becoming big fans, and want to know more.

“Ball was taking a pretty big gamble going into television, which most other movie stars weren’t doing at that time,” he continues. “I have been overwhelmed by the reception to The Plot Thickens. It’s amazing hearing Lucy’s own voice telling her own story. There’s nothing like going straight to the source.”

The sitcom continues to win over new audiences each day on Hamilton, Ont.’s CHCH-TV, where I Love Lucy has reigned supreme in their popular “retro” daytime lineup, alongside other shows produced by — or at — Desilu, including Mission: Impossible and The Andy Griffith Show.

“Lucille Ball is such a comedic icon,” Sonya Davidson, 35 and Director of Programming for Channel Zero, the parent company of CHCH, says. “I Love Lucy is a show with two very strong female leads and it is also a show where Lucy gets into the most ridiculous situations, but somehow Lucille Ball makes it believable.”

Davidson adds that, “Whether you’ve seen them a thousand times or whether they are new to you, it doesn’t matter if they were produced in the 1950s. The comedy is still very relevant for today. In this day and age, there is no such thing as content that just disappears. With streaming services, television and the internet, good content will always prevail.”

And, at the end of the day, the internet is bringing I Love Lucy to more people than ever before.

“People are coming into Lucille Ball — and not necessarily I Love Lucy and Lucy Ricardo — very differently from people who are in my Gen-X generation,” says Zimmerman. “When I was growing up, I had a TV I could watch her on, could rent the videos at Blockbuster and read the books, but now it is more accessible on the internet.

“If people aren’t finding the show funny, or aren’t interested in it, why are generation after generation watching this show?” she adds. “There is not a decline in teens, millennials and even younger kids. Their parents are introducing it to them, they are finding it online, and if it wasn’t funny, they wouldn’t stay.”

70 years on, that’s reason enough for an anniversary party.

Brock Weir is a newspaper editor and life-long fan of Lucille Ball, Desi Arnaz, and the Desilu Family. He is a co-administrator of The Lucy Lounge fan community, which can also be found on Instagram and Facebook.

Will We Love Lucy? The First “Being the Ricardos” Trailer Raises Questions About the Nicole Kidman-Led Lucille Ball, Desi Arnaz Biopic

Jimmy Kimmel Talks Recreating Norman Lear Classics With the Upcoming “Live in Front of a Studio Audience: The Facts of Life and Diff’rent Strokes”