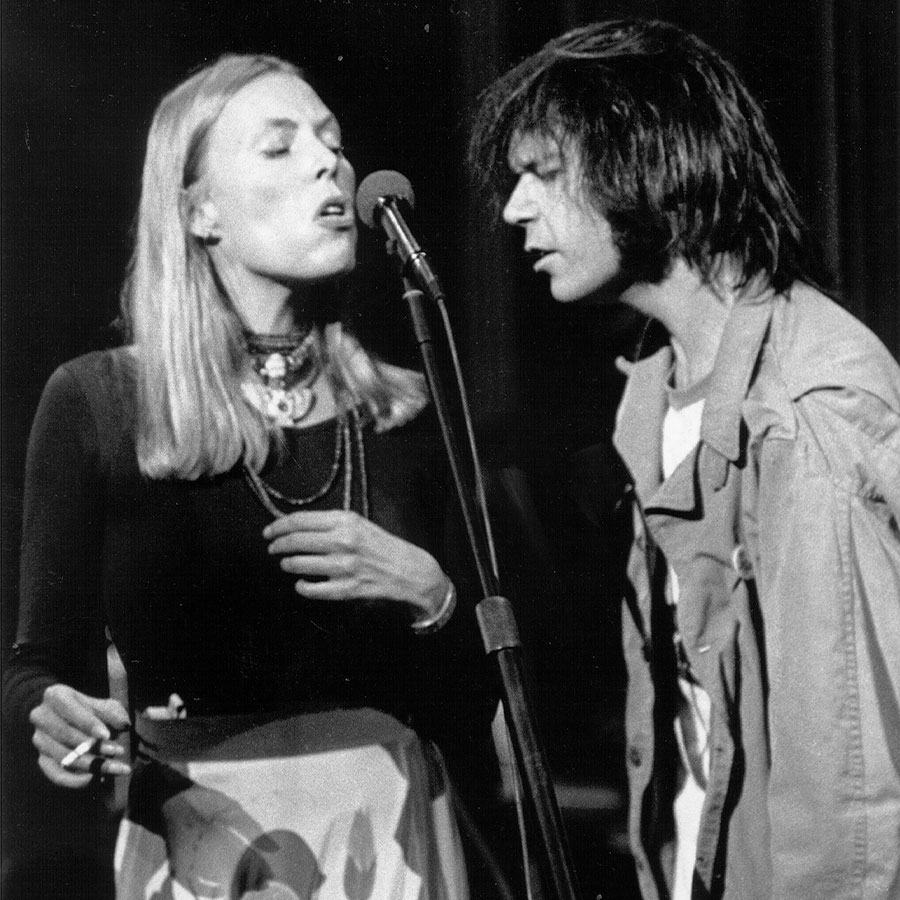 Neil Young and Joni Mitchell, seen here in a 1970 photo, have both taken a stand against Joe Rogan's COVID-19 content on Spotify with a boycott of the streaming platform. Photo: Larry Hulst/Michael Ochs Archives/Getty Images

In case there was any doubt, it is now abundantly clear that the counterculture spirit cultivated in the ’60s ran very deep and remains entrenched today. That conclusion is affirmed by the actions of Neil Young and Joni Mitchell, whose names are once again being linked in the press, not for being hit-making Canuck-born musical trailblazers born under Sun Sign Scorpio, but for being good, old-fashioned activists.

As has been widely reported, Young, 76, last week asked Spotify to remove his music from its roster in protest over misinformation and obfuscations about vaccines spread by the behemoth streaming service’s Joe Rogan Experience, a podcast for which Spotify reportedly paid US$100 million via a licensing deal in 2020.

Earlier this week, Mitchell, 78, followed suit, with American guitarist Nils Lofgren, 70, of the E Street Band and Crazy Horse, close behind. By Wednesday, Young’s former CSNY bandmates David Crosby, Stephen Stills, and Graham Nash — who, like Young and Mitchell, blossomed in the peace-by-protest heyday of the ’60s — joined the ranks, also asking the streaming service to remove their music.

Stop, children, what’s that sound? Everybody look what’s going down. Um, yes, and maybe now more than ever. Sure, a handful of younger artists, such as Canada’s Danny Michel, James Keeleghan, and Holly McNarland, have also joined the say-no-to-Spotify bandwagon. But it’s obvious an older generation is at this wheel.

While it’s doubtful the protest by Young, Mitchell and the rest will hobble Spotify’s bottom line the way similar action from contemporary mega-stars Drake or Justin Bieber might — Bieber last week became the first artist with 10 tracks having over a billion Spotify streams — their protest has attracted global attention and apparent blowback.

Variety reports Spotify’s market capitalization fell about US$2.1 billion over a three-day span last week. And in the words of Canuck music industry watchdog FYI, Spotify actually “blinked,” publishing “an official Spotify rulebook to help our users understand how Spotify assesses all content on our platform.”

“Based on the feedback over the last several weeks, it’s become clear to me that we have an obligation to do more to provide balance and access to widely accepted information from the medical and scientific communities guiding us through this unprecedented time,” said Spotify CEO Daniel Ek.

“We take this seriously and will continue to partner with experts and invest heavily in our platform functionality and product capabilities for the benefit of creators and listeners alike. That doesn’t mean that we always get it right, but we are committed to learning, growing and evolving.”

Adds FYI in the same pithy post, “Another sign that the pressure is mounting in the House of Ek, Rogan took to Instagram on Sunday to apologize to those offended by his broadcasts. “If I pissed you off, I’m sorry,” Rogan said. “And if you enjoy the podcast, thank you.”

So yeah, these are not bad optics for a bunch of codgers, albeit globally famous ones, whose core constituency is more likely spinning their vinyl at home anyways. But still. The story is sticking in the headlines, serving as a meaningful reminder that everyone has a voice, even those without much traction on TikTok.

Younger artists may yet be spurred into action by the example set by their musical elders, for whom protest is synonymous with living and who are attracting the support of their own contemporaries, with The View’s Joy Behar, 79, calling on the proverbial kids to add their voices to the chorus.

There is evidence that protest against platforms such as Spotify can effect change. Following the release of her latest album 30 last fall, Adele asked Spotify to remove the shuffle feature from albums, thereby persuading users to hear songs in their intended order. Her demand was honoured.

And Young has tangled with Spotify in the past, pulling his entire catalogue in 2015, citing poor sound quality. Surely, that gave him more heft this time around: the man means what he says.

Still, it remains curious — and interesting in an anthropological sort of way — that the activist spirit so ingrained in the aforementioned older musicians shows no signs of flagging, while those who’d happily queue to sing their praises have remained conspicuously silent.

Sidebar: Where the heck is dial-an-activist Bono when you need him? If he hates his band’s name and his own singing, as he recently (and can we just say bizarrely) claimed to podcast Awards Chatter, then joining the Spotify don’t-play-me brigade would seem an ideal real-world — not to mention metaphorical — antidote.

It would certainly square with U2’s ongoing activism. Then again, Bono is 61, so well within striking distance of ’60s-era awareness and activism. No bonus points for youth here, alas.

As The Conversation so succinctly put it in a recent piece on the Young-Mitchell-Spotify ruckus, “Failures to moderate harmful content are harder to ignore when they involve bigger name artists. Neil Young has never shied away from political action in a musical career spanning nearly six decades.

“Ideally, the pressure from Young’s fans and other prominent artists will push Spotify to take effective action against misinformation so users can spend time rockin’ in the free world instead of listening to COVID conspiracy theories.”