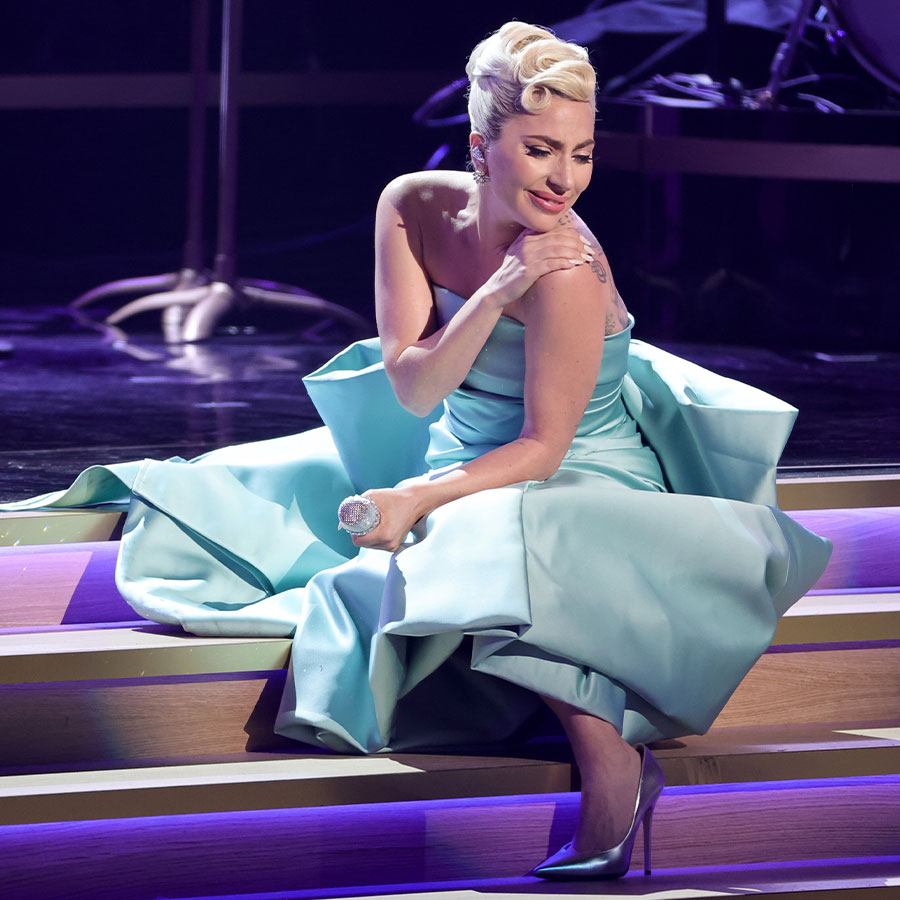 In its return to a traditional in-person ceremony in Las Vegas’ MGM Grand Arena, the 64th Grammy Awards lived up to its billing as “music’s biggest night.”

Following the Academy Awards last Sunday, a night overshadowed by controversy surrounding Will Smith’s onstage assault of Chris Rock, the Grammys provided a much-needed breath of fresh air from the onslaught of coverage that’s followed the incident.

In fact, host Trever Noah delivered his singular — and obligatory — dig on the King Richard actor right off the hop when he promised an evening of enjoying music dancing and “keeping people’s names out of our mouths,” mimicking the line Smith shouted after slapping Rock.

The night heavily featured music’s youngest stars, yet the awards ceremony also made a point of celebrating generations past.

The ceremony’s throwback to past eras was reflected in everything from the women’s red carpet fashion to the vibe and inspiration of the performances and music earning top awards.

Here, we take a look at some of the most memorable moments and takeaways.

The Grammys went above and beyond just ribbons in support of Ukraine, bringing viewers and musicians in attendance a plea for support from Volodymyr Zelenskyy himself — an idea the Academy Awards reportedly rejected in the lead up to their show, despite Zelensky being an actor before he entered politics.

“Our musicians wear body armour instead of tuxedos. They sing to the wounded in hospitals, even to those who can’t hear them,” he said in a video address. “But the music will break through anyway.”

“Fill the silence with your music. Fill it today to tell our story. Tell the truth about the war on your social networks, on TV, support us in any way you can, but not silence. And then peace will come to all our cities,” Zelenskyy added.

As reported by Variety, the pre-taped message was recorded from a Kyiv bunker. The Grammys partnered with Global Citizen and the Stand Up For Ukraine campaign to produce the segment.

Legend was joined by Ukrainian artists Siuzanna Iglidan, a bandura player, singer Mika Newton and poet Lyuba Yakimchuck, who, according to an onscreen caption, “fled Ukraine just days ago.”

Lady Gaga and Tony Bennett picked up a win for Best Traditional Pop Vocal Album for their collaborative LP Love for Sale, a tribute to the late composer and songwriter Cole Porter. Bennett, who retired last year after struggling with the affects of Alzheimers, put on his final show alongside Gaga in August 2021. With the win, Bennett, 95, secured his 20th Grammy and became the second oldest artist ever to win a Grammy.

And while he didn’t attend the ceremony, he appeared in a pre-recorded video to introduce Gaga as she performed a moving tribute to the legendary crooner.

Embodying the spirit, look and feel of the ’50s, the pop icon opened with a dazzling rendition of the title track from their album, “Love For Sale.”

She then slowed the tempo down for an emotional performance of “Do You Love Me” accompanied by footage of Gaga and Bennett working on their two albums.

In a touching moment, an emotional Lady Gaga finished the ballad with a message to her longtime friend and idol.

Despite a mostly youth-infused lineup, the older crowd still got their nostalgia fix, with a few performances building on Gaga’s retro feel.

Jon Batiste, bandleader of The Late Show with Stephen Colbert, won five Grammys and brought down the house with a rousing performance of his hit song and winner of Best Music Video, “Freedom,” complete with a full band and choir, a clear nod to ’70s musical variety show Soul Train.

Filmmaker Sekiya Dorsett described the performance best when she called it “both futuristic, present and past all at the same time.”

“We’re at a party and a baptism,” she added on Twitter.

Then, there was Lenny Kravitz, 58, joining H.E.R., 24, onstage for an intergenerational jam session, which included Travis Barker, 46, who came to prominence in the ’90s as the drummer for Blink 182, and Jimmy Jam & Terry Lewis, the songwriting and record production team behind many of Janet Jackson’s hits in the ’80s.

Kravitz provided the exclamation point on the performance, with a fierce guitar duet with the young singer.

The biggest winners of the night, the duo Soul Sonic, of Bruno Mars and Anderson .Paak, who model their style after the ’70s R&B group The Stylistics, pulled off what .Paak called a “clean sweep” taking home Best R&B Song, Best R&B Performance, Song of the Year and Record of the Year. The pair also played the retro role for the night, with .Paak.’s Ike Turner-esque wig raising eyebrows on social media and Mars channelling Sammy Davis Jr. as he lit a cigarette on stage after their Record of the Year win.

Looking resplendent in an Issey Miyake Pleat Please coat and a red beret that matched her shoes and walking stick, Canadian singer-songwriter Joni Mitchell, 78, was awarded Best Historical Album, during the streamed portion of the ceremony earlier on Sunday, for Joni Mitchell Archives, Vol. 1: The Early Years (1963-1967).

The win was impressive, considering she beat out Sign o’ the Times from Prince, who was a big fan of the music icon, even covering her hit “A Case of You” on multiple occasions.

Meanwhile, her attendance at the ceremony had fans celebrating her hard-fought recovery from a brain aneurysm in 2015 that left her unable to walk and speak.

The celebrated artist took to the Grammys stage alongside fellow musician Bonnie Raitt to introduce a performance from Brandi Carlile. Her attendance capped off a special time for the Woodstock singer, who recently celebrated the 50th anniversary of her quintessential classic album Blue and received special honour ahead of the ceremony as Musicares Person of the Year — an annual award given out by the Recording Academy’s charitable arm. She even got the chance to test out her pipes during the star-studded gala, joining Carlile onstage at the event’s conclusion to belt out two of her hits, “The Circle Game” and “Big Yellow Taxi.”

“This is a surreal moment for me. I got to hear I won a Grammy while driving in the middle of a snowstorm between shows here in Canada,” Cuba said in a news release. “I am grateful beyond words to life and to my family.”

The singer, who’s earned two Latin Grammy Awards and two Juno Awards, says he hopes the 10-track album, made at home in the middle of the pandemic, “inspires other independent artists in Latin America to believe and follow their dreams.”

“Music has won today, no marketing strategies or fashion trends,” Cuba added  of the win.

Montreal conductor Yannick Nézet-Séguin also picked up his first Grammy for best orchestral performance, while The Weeknd picked up a win for Best Melodic Rap Performance for his feature on “Hurricane” by rapper Kanye West. Both The Weeknd and Toronto rapper Drake have severed their relationship with the Recording Academy.

It’s interesting (or perhaps unfortunate) to note that Bieber has yet to win a Grammy in a Pop category, the genre he’s dominated since the beginning of his career. His two wins have come in the dance music and country music categories.

Still, the pop star was in good form on Sunday night, performing “Peaches” with fellow Canadian Daniel Caesar — which included Bieber showcasing his talents on the piano before launching into the Grammy-nominated hit.

Taking a different tact than this year’s Oscars, which were criticized for setting their in memoriam segment to upbeat music complete with elaborate dance choreography at times, the Grammys went a much more traditional route.

A quartet of Rachel Zegler, Cynthia Erivo, Leslie Odom Jr. and Ben Platt took to the stage to perform classic songs written by the late Stephen Sondheim, who died in November, as the names and faces of musicians and music industry members we mourned this past year were displayed on the screen behind them.

The Foo Fighters, who were not in attendance due to the recent passing of their drummer Taylor Hawkins, who started his career in the 90s in Alanis Morsette’s band, won in each category they were nominated in, taking home Best Rock Performance, Best Rock Song and Best Rock Album.

The theme of celebrating icons of the past was also evident on the red carpet.

H.E.R., who’s known for paying sartorial tribute to her heroes, channeled Queen of Soul Aretha Franklin with a yellow and orange sequin jumpsuit by Dundas — a look reminiscent of Franklin’s American Music Awards outfit in 1976.

“I was actually inspired by Aretha Franklin tonight,” H.E.R. confirmed to Laverne Cox, who went vintage as well wth a two-piece set from John Galliano’s fall 2007 collection. “It was one of her iconic looks, and she’s an icon.”

But it was the older men making a big splash, with Lenny Kravitz revisiting the gender-bending rockstar glam of the ’70s with a silver metal mesh tank top that dipped down to expose his chest, leather pants and heeled knee-high leather boots. The rockstar stuck with the knee-high heels for his Grammy performance with H.E.R., switching them out for a silver pair to go along with a gold ensemble and then with a leopard pair to present later on in the evening.

Jared Leto, 50, followed suit with a bare-chested look, sporting a sheer beaded shirt and a dramatic black coat from his usual supplier, Gucci.

Pop princess Dua Lipa shut down the red carpet in a 1992 Versace dress first worn by supermodel Christy Turlington on the runway, and showed up with a dyed blond mane — all the better to channel designer Donatella Versace, 66.

Later, Lipa and Megan Thee Stallion would take to the stage donning “who wore it best” outfits recreating an iconic pop-culture moment between Mariah Carey and Whitney Houston in 1998, at the height of their supposed rivalry, when the pair wore the same brown, plunge-neck Vera Wang gown at the podium.

For the recreation, Donatella Versace jumped on stage for a quick edit of the two outfits, removing the detachable skirt from both artists.

“Now these are my girls,” Versace said before leaving the stage.

Nothing, however, quite beats the original clip, which saw the two singing legends have some fun with their perceived feud.