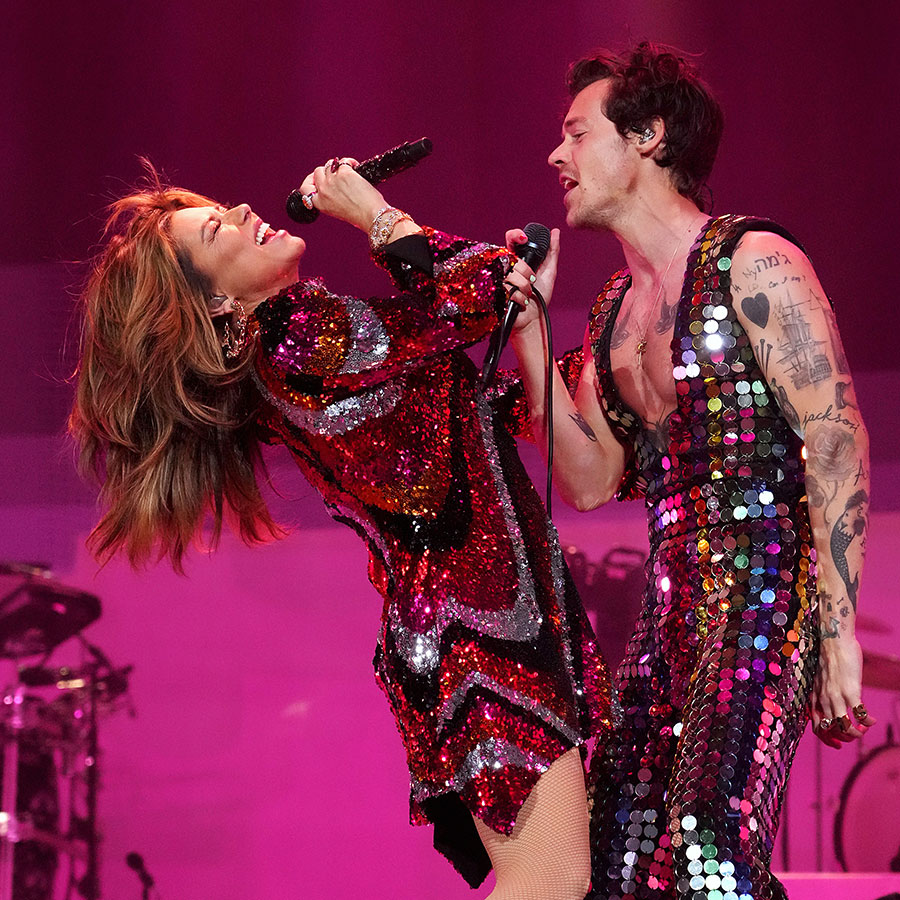 Shania Twain joined Harry Styles onstage at Coachella on Friday to perform a pair of her most famous hits with the pop star. Photo: Kevin Mazur/Getty Images for Coachella

Harry Styles, 28, with his gender-bending acumen and social-media dominance is a thoroughly modern Rockstar, but one awash in nostalgia. And last night he surprised the 100,000 strong crowd during his dazzling Coachella headlining set with a nod to the ’90s by bringing Canadian country legend Shania Twain, 56, out to duet on two of her massive 1997 hits. The hipster-friendly music festival in Indio California has returned from a two-year hiatus due to the pandemic. The two performed “Man! I Feel Like A Woman,” and  “Still The One,” released in 2017 when Styles was three years old.

Twain matched Styles’ vampily cut glam rock Gucci rainbow-mirror jumpsuit spangle for sequin in a sassy caftan-like mini by Halpern, paired with made-for-walking boots. She was in full diva mode as she made her entrance down a flight of stairs to a kneeling-in-homage Styles, to trade her vintage and still-sizzling dance moves with his. She also gave as good as she got during the banger — a gif of Twain running one hand down Styles’ bare chest and abdomen has since gone viral.

“In the car with my Mother as a child, this lady taught me to sing. She also taught me that men are trash,” an elated Styles told the crowd when the stars sat to serenade each other with the ballad. Twain scrummed along as they sang using an on-brand glittery guitar.

Twain, who said she was honoured, thrilled and star-struck to be on stage with Styles, first signalled their friendship in 2017, when she posted a picture of the  two of them hugging and laughing to her Instagram account at one of Styles’ shows. As part of the mutual admiration society, Styles has long telegraphed his reverence for Twain since he revealed in an interview that being a Shania fan was a little-known fact about him.

And he has sung those songs before. During his One Direction Boy Band days (from 2010 to 2015) he was captured in behind-the-scenes footage singing  “Man, I Feel Like A Woman” with bandmate Niall Horan. And during his 2018 tour he covered “Still The One” with country star Kasey Musgraves, which won an award as Spotify’s most popular cover that year. In a 2020 interview Twain revealed that she and Styles had been texting about music and possibly working together, stating it would be “a dream collaboration.” Well it came true, and as Twain left the Coachella stage Styles jokingly asked the crowd if they were still there, saying the duet transported him into another world.

And with that, Styles crossed another pinch-me moment off his musical-idol-moment bucket list. He often dresses in the manner of Bowie and Jagger and has been called the love child that Stevie Nicks and Mick Fleetwood never had by the Fleetwood Mac icons themselves. Styles has been covering their music in concert for years now, performing “Break The Chain” and “Landslide” with Nicks herself on several occasions and he inducted her into the Rock & Roll Hall of Fame in 2019. For his part, Fleetwood is currently the face of Pleasing, Styles’ recently launched beauty brand, appearing in ads sporting its ’70s-style “Shroom Bloom” collection of nail polishes (via vibe-y manicures) and apparel.

While last night’s set mostly consisted of songs from Fine Line, Styles’ 2019 album, which includes his Grammy-winning smash “Watermelon Sugar,” three new songs from his upcoming third solo album, “Harry’s House,” were taken for a spin. The show kicked off with “As It Was,” the first single which is already sitting at No.1 globally on most charts — an ’80s new wave, à la Aha, inflected bop. This opens a new era of throwback fascination for Styles fans, the older of which will no doubt thank him for the memories. For as he also told Twain in a heartfelt moment, “For the memories you gave me with my Mother I will be forever grateful. I am so grateful you’re here with us tonight. This is very special for me. Thank You So Much.” We feel you Harry Styles.