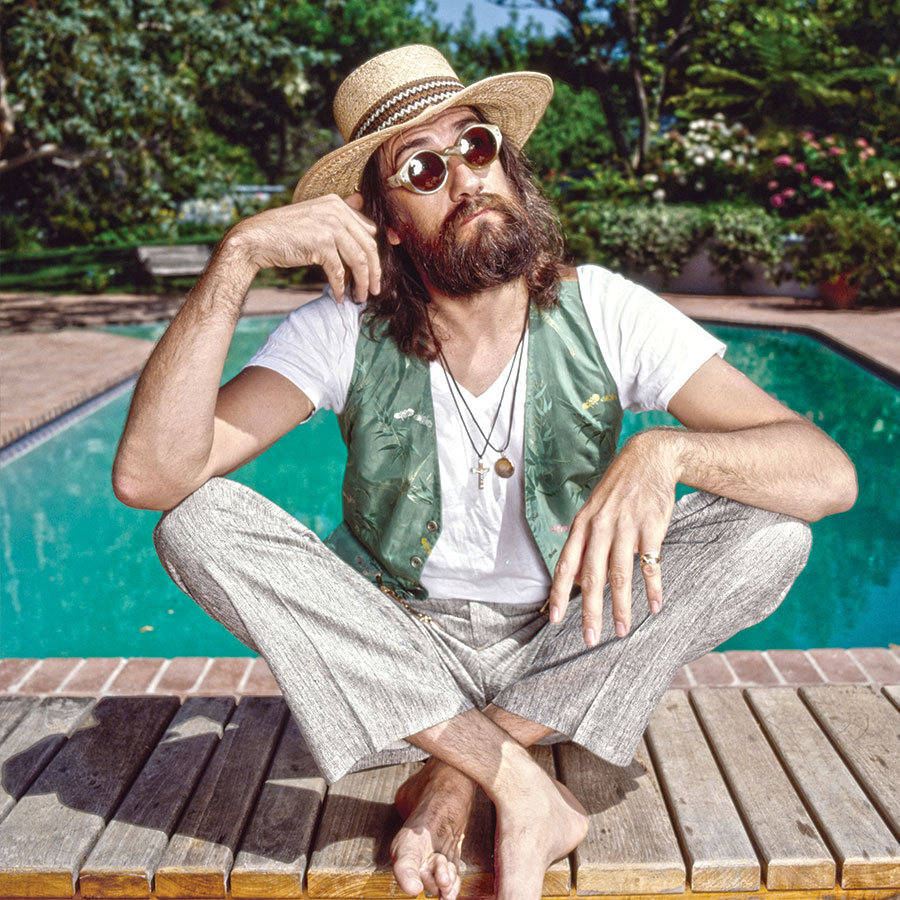 Mick Fleetwood was revealed Monday as the new face of Harry Styles’ beauty line, Pleasing. The 74-year-old rocker was photographed for the line’s second product launch, called Shroom Bloom, at his home in Maui, Hawaii. He is seen lounging in a purple striped robe, with one of his signature hats (in this case, a purple top hat) and a variety of bold manicures and violet half-moon reading glasses for the winning accessories touch.

Pleasing, which includes gender-neutral nail polishes curated by Styles, along with face serums and hand and nail oils, was launched to further Styles’s own style persona: the 27-year-old recording star turned actor is the spiritual heir of Jagger and Bowie in their prime, situated at the nexus of androgyny and flamboyance.

The choice of Fleetwood is no surprise to followers of Styles and his obsession with boomer culture, and the band Fleetwood Mac in particular. He has had a long mutual adoration society with Stevie Nicks, whom he met when he brought surprised her backstage at a concert with a birthday cake circa 2015.

In fact, it was Fleetwood, the band’s drummer (and one of Nicks’ former paramours) who met Styles first. He was backstage with his teenaged twin daughters at a One Direction concert in 2014. Styles immediately gravitated to Fleetwood, sharing that “Dreams” (from 1977’s blockbuster Rumours album) was the first song he ever learned.

Styles has performed with Nicks, and with the band, several times (including at L.A.’s legendary Troubadour venue), and he inducted Nicks into the Rock & Roll Hall of Fame in 2019. It was in 2020, in Rolling Stone, that Nicks called Styles the “love child” of her and Fleetwood. “When Harry came into our lives, I said, ‘Oh my God, this is the son I never had.’ So I adopted him,” she said.

Of his choice to have Fleetwood as the face of his beauty line, Styles told Vogue: “He’s a magical man … I felt there couldn’t be a better embodiment of Pleasing, or a person who could so naturally capture the wizardry that we love.”

The magic and wizard references are no accident, nor is the mushroom imagery in the campaign, which is very 1967 redux, all swirling graphics alluding to psychedelia. While born well after the hallucinogen’s ’60s heyday, the singer has admitted to experimenting with “shrooms,” specifically while recording his second studio album, Fine Line — which featured his Grammy Award-winning song “Watermelon Sugar.”

“We’d do mushrooms, lie down on the grass, and listen to Paul McCartney’s “Ram” in the sunshine. We’d just turn the speakers into the yard,” he told Rolling Stone.

“This is where I was standing when we were doing mushrooms and I bit off the tip of my tongue,” he said of a particular spot in the studio. “So I was trying to sing with all this blood gushing out of my mouth. So many fond memories, this place.”

Mick Fleetwood fits perfectly into this rebirth of both magical psychedelic vibes and a revisiting of glam androgyny. As he told Vogue: “Back in the day in London, I used to wear nail polish and all sorts of stuff, and the attitude was, ‘so what?’ It didn’t have anything to do with sexuality. It’s not about that. It’s about having fun.”

He cites the historical evidence that in ancient tribes both men and women loved to dress in “beautiful, colourful things.” He says he chose the red colours over the muted blues and pinks and greens in the line for his own manicure. “About three or four days after the shoot was over. I still had the nail varnish on and thought, I can actually see where my hands are going … When you pick a glass up, you actually connect with what you’re doing, which is what style is all about.”

Styles has always claimed to be enamoured of older people. He is now famously dating actress-director Olivia Wilde, who is 10 years his senior. His dating life has been interesting: there have been dalliances (possibly publicity stunts) with Taylor Swift and Kendall Jenner.

But it is an early hookup with British presenter Caroline Flack (who committed suicide last year) that stands out. Flack was well into her 30s when Styles, then 17, met her at his debut on the reality contest show X Factor in 2011. Styles famously said the only women too old for him to date would be the age of his mother (who is in her mid-50s).

Mick Fleetwood’s photos for Pleasing are instantly iconic, and another step forward for senior influencers, following in the footsteps of the late Joan Didion, who became the face of Celine in 2015 at the age of 81. It is perhaps more “on brand” than the other unlikely campaign pairing this year, wherein the ever-glamorous Cher, 75, embraced Australian surfer via Augties’ mallrat brand Uggs. Though it is heartening that the rock ‘n’ roll heroes of the ’70s continue to be so relevant, and so revered by the generations following.

From Bombshell Interviews to Trailblazing Stars, the Top 10 Pop Culture Moments of 2021