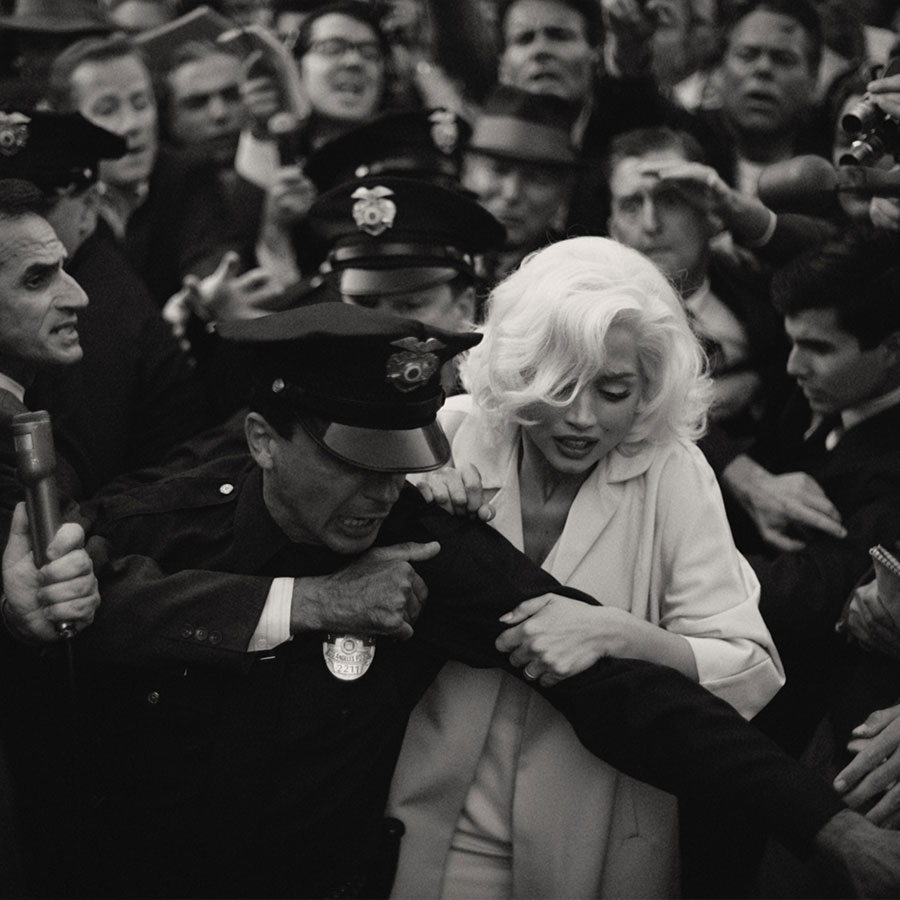 Over the years, actresses have been drawn to Marilyn Monroe — the woman and the character — like moths to a flame. Monroe became a legend the moment she died and has for almost as long been the shorthand for smart women victimized by men, fame and trauma.

It wouldn’t be accurate to call the latest focus on Monroe a “revival” since she’s been pop cultural wallpaper for years. Still, in May, Andy Warhol’s 1964 Marilyn Monroe silkscreen sold for US$195 million. At the same time, Kim Kardashian borrowed the actual Jean Louis dress Monroe wore to sing “Happy Birthday, Mr. President” to John F. Kennedy and sparked controversy when she wore (and reportedly damaged, though she denies it) the artifact to the annual Met Gala.

And now, the latest celebrity to attempt the Marilyn transformation is Cuban-American actress Ana de Armas (Knives Out), in filmmaker Andrew Dominik’s NC-17 rated Netflix movie Blonde (streaming Sept. 28). It’s based on Joyce Carol Oates’s 2000 bestseller of the same name, the simplistic thesis of a fragile soul in search of a father figure (one that nevertheless clocked in at more than 700 pages). Oates loads the tragic star’s life with the graphic details of female exploitation for which she uses her as a symbol. In a 2015 Time interview she referred to the book as, “my Moby Dick, the powerful galvanizing image about which an epic might be constructed, with myriad levels of meaning and significance.” (An earlier 2001 television movie version of Oates’s novel starred Poppy Montgomery; the author herself has praised Netflix’s new adaptation — but what else is she gonna do?)

The film Blonde, meanwhile, exhumes Monroe’s victimization in a way that feels like disturbing her grave and blowing the dust off a peacefully decomposing corpse. Mistaking trauma re-enactment for insight and empathy, Dominik covers 30 years of the actress’ life, from childhood molestation in orphanages and foster homes to failed pregnancies up to her untimely death from barbiturates overdose in 1962, at the age of 36, by working backwards from photographs taken throughout Monroe’s life. The string of re-enactment scenes are filmed in either black and white or colour; there’s no narrative reason for the back and forth, beyond the goal of being faithful to the original source photos.

Dominik’s Marilyn is all empty-vessel cautionary tale. In the guise of faithfulness. The movie’s lurid ghoulishness filmed and recreated these moments in Monroe’s former homes, according to production designer Florencia Martin — including the apartment she lived in with her abusive mother and filming the overdose scene in the actual bedroom of the home in Brentwood where she died.

A Brief History of Early Marilyns

A biopic in all but name, it’s disingenuous for Blonde’s press push to suggest that both the general themes (and specific events) of Monroe’s life that it purports to explore haven’t been explored before. Granted: the earlier Monroe projects of the ’80s and ’90s dutifully wiggled their way through the factual, superficial highlights of her biography, without much digging into her psyche.

There’s the 1980 TV movie, Marilyn: The Untold Story, based on Norman Mailer’s book that begins where Blonde ends — in the Brentwood house bedroom where she died, with Catherine Hicks (familiar as the mom from 7th Heaven) in the lead. Lookalike Susan Griffiths made an entire career of impersonating Monroe in nostalgic cabarets, commercials and bit-parts from Quantum Leap and Pulp Fiction (the diner scene!) to Curb Your Enthusiasm, so it would make sense she would also star in the dubious light-hearted 1991 romance Marilyn and Me. Most of these depictions, however, feel about as real as if a Madame Tussaud wax likeness of the icon came to life.

The portrayals evolved as more aspects of her life became known and broke new ground in HBO’s inventive 1996 TV movie, Norma Jeane and Marilyn,, wherein Ashley Judd is the mousy “before” to Mira Sorvino’s glamorous “after.” As befits the ’50s, the decade when Hollywood became obsessed with Freud and psychoanalysis, the film deconstructs the idea of her split personas and they play off one another. “I wanted to do right by her,” Sorvino recently tweeted. “Finally took the pressure off by saying no one could ever ‘be’ her, 1 of a kind, this was just my homage to her, to share what I thought I understood about her …”

Sisters Under the Pink

“Marilyn was made into something not human in a way, and I can relate to that,” Madonna later told the New York Daily News about paying homage to her favourite Monroe scene. “Her sexuality was something everyone was obsessed with and that I can relate to. There were certain things about her vulnerability that I’m curious about and attracted to.”

The gold digger routine was later referenced by Anna Nicole Smith, another famously misunderstood (and ultimately, tragic) blond pin-up, in her fur-free ads for PETA.

In the decades since both the original cultural touchstone moment on screen in 1953 and Madonna’s canny reprise, other women have referenced and remixed the visual iconography of the original to invoke the capitalist-feminist anthem it references.

Filmmaker Cathy Yan’s 2020 film Birds of Prey, for example, contains a similar tribute as Madonna (albeit darker than the Barbiecore original). In a sequence where Margot Robbie’s gleefully unhinged villain Harley Quinn is captured and violently beaten by male foes, to reframe the situation and regain control she disassociates with a fantasy in which she vamps and performs as Monroe’s most famous character, showgirl gold digger Lorelei Leer. Given that Gentlemen’s source material (the Anita Loos modern classic from 1925) questions power structures and the position of women in society, it’s an absolutely perfect choice of musical interlude.

The pink dress, blond wig and all the baggage that comes with them have also been interpreted on The Muppet Show, Glee, and Gossip Girl, and by superstar celebrities that range from a Spice Girl and a Jenner to Ariana Grande. (Though as the condescending punchline for an ill-conceived “comedy” bit by James Franco on the 2011 Oscars telecast, it bombed — as it should have.) As well, frenemy starlets vie for the lead in Bombshell, the Broadway musical-within-the-musical of the short-lived series Smash.

The iconography of Monroe’s image is so powerful that even lesser-known references come loaded with meaning. In the recent miniseries Pam & Tommy (which I wrote about for Zoomer), for example, for a sequence after Pamela Anderson’s private sex tapes are sold, actress Lily James (as Anderson) wears a copycat of the Mexican souvenir cardigan Monroe wore in the final beach photo sessions before her death. It’s suggests a parallel with Monroe in the aftermath of her affair with John F. Kennedy, to when Anderson was most beleaguered by media and slavered over by fans purely as a sex object.

The facsimile reproductions of Monroe’s private notebook and hotel stationery jottings in the 2012 book Fragments reveal an actress grappling with insecurity, self-acceptance and loneliness; one otherwise empty page has the words “having a sense of myself.” That tension between private and public self and constructions of image in the world of celebrity peaked during the gossip era of the naughts, around the same time Michelle Williams won a Golden Globe and earned a Best Actress Academy Award nomination for attempting to channel both the star’s magnetism and fragility in the 2011 film My Week with Marilyn. It was made at a time of frenzied tabloid interest, in the wake of her former partner Heath Ledger’s untimely death. “I don’t think I ever cried so much for somebody I didn’t know,” Williams revealed in an interview at the time of how she captured Monroe’s underlying sadness and would weep in her car on the way home from set.

That movie, however, is an impression of Monroe from the point of view of a production assistant acquaintance who worked on Laurence Olivier’s The Prince and the Showgirl. In many ways she remains a projection of actresses’s desires, dreams, preoccupations and interpretations, which shift along with the cultural climate. Because what more could we possibly hope to glean about her?

Monroe recently got a more fulsome treatment from Kelli Garner in the 2015 Lifetime adaptation of J. Randy Taraborrelli’s bestseller The Secret Life of Marilyn Monroe, for example. Garner says she agreed to the role because the TV series examined Monroe’s struggles with mental illness, a subject matter that fascinated her because of her own experiences in therapy (which is a narrative device in the series). “I knew it would, if anything, make me a better actress,” she told Today. “It was a challenge and a study of myself as a performer.”

Dressing Up as Marilyn

For a kaleidoscopic impression of Monroe’s life that has substance, I generally refer people to Liz Garbus’s 2012 documentary Love, Marilyn (currently on Kanopy and free to stream with a Toronto Public Library Card). Using correspondence and personal papers between Monroe and her circle of friends and colleagues, actors including Glenn Close, Ellen Burstyn, David Strathairn, and Viola Davis give interpretive readings in the engrossing, stylized collage film — much like Ethan Hawke’s new Paul Newman-Joanne Woodward docuseries The Last Movie Stars.

Followers of celebrity will notice that Lindsay Lohan and Evan Rachel Wood are among Love, Marilyn’s contributing performers. Lohan’s personal issues and fractious relationship with fame as she went from child star to adult roles is well-known, but the latter only recently divulged details about the abuse she allegedly experienced at the hands of controlling former partner Marilyn Manson.

The Blind Leading the Blond

This latest, Blonde, arrives in a post-Harvey Weinstein #MeToo Hollywood and post-Roe v. Wade America. We’ve been looking behind the curtain of the bizarro world of fame, misogyny and celebrity it depicts for years now already, most recently following the Britney Spears conservatorship case. Between Ryan Murphy’s revisionist Netflix series, Hollywood, and the forthcoming movie Babylon (Dec. 25, set during the hedonistic early Tinseltown transition to talkies), even modestly insightful depictions of toxic Hollywood explored through a contemporary lens are starting to feel as dated as Monroe’s work feels vibrant.

I recently screened Gentlemen Prefer Blondes, at my monthly movie series, specifically because in all the talk these recent months about Marilyn Monroe as a pop culture figure, what once again gets lost is her legacy as an actress. A full house roared throughout the musical comedy: she is magnetic onscreen and her talent, intelligence and wit are undeniable — as is her comic timing.

Actresses try and fail to capture that allure, although Blonde lead de Armas can be commended for her uncanny physical impression and commitment to the psychodrama. It checks many of the requisite mimicry boxes.

Aside from a screen-test reading, however, it’s worth noting that the movie lingers only in the margins of Monroe’s famous projects (like Some Like It Hot) and avoids attempts to recreate any actual performances. It’s the one thing Blonde unwittingly does right.

Blonde is in select Canadian cinemas Sept. 23, then on Netflix Sept. 28.

Marilyn Monroe: Why Are We Still Obsessed With the Hollywood Legend 60 Years After Her Death?