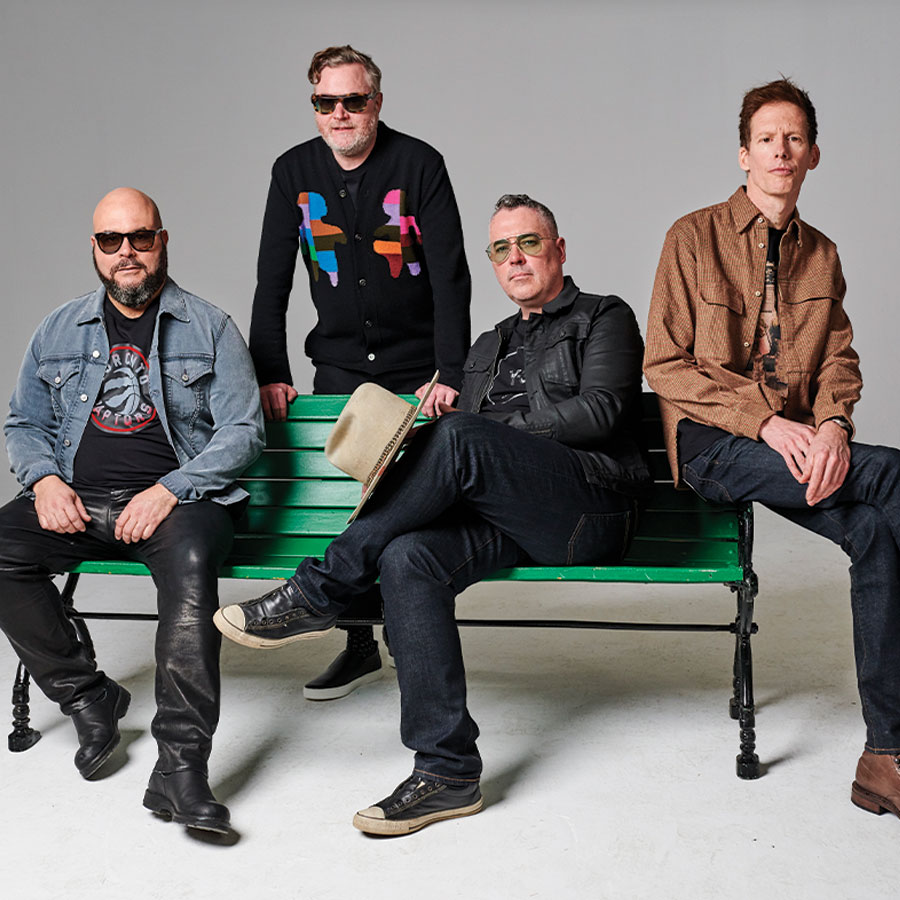 Circling the globe in a single night in a magic sleigh is impressive.

But spreading Christmas spirit across Canada by bus over the span of a 14-date Hometown Holidays Tour is pretty great too. And it’s exactly what the Barenaked Ladies have in mind, bringing festive seasonal songs, gift-wrapped in the Canadian quartet’s matchless performances, to shivering masses from Vancouver to Toronto.

Really, Santa can’t hold a candy cane to a trip to North Bay via Thunder Bay in deepest December, which the band has fearlessly pledged to do.

As BNL’s Toronto-based singer-songwriter and co-founder Ed Robertson explains from New York, the point of the Hometown Holidays Tour, launching Dec. 1 in Vancouver, is two-fold: promoting a deluxe digital edition of the band’s hit 2004 Barenaked for the Holidays album — which is also being issued on limited edition vinyl for the first time — and simply to tour again after a fallow period during COVID. “Touring the Canadian Prairies in the winter is no joke,” Robertson, 52, confirms. “It can be a bit of a trial when the winds are high and the snow is deep. But there is something lovely about touring at home during the holidays, seeing old friends, going to favourite places.

“A tour for us is not just playing a rock show in a city we don’t live in. It’s visiting a place we have visited maybe once a year for 30-plus years, sometimes even more than that. It’s a chance to do what we love to do.”

These tracks complement the album’s initial mix of BNL seasonal originals such as “Green Christmas” written for director Ron Howard’s 2000 film Dr. Seuss’ How the Grinch Stole Christmas, as well as chestnuts like “Jingle Bells” and “Auld Lang Syne.”

“That song comes out of a medley of Black Sabbath’s ‘War Pigs’ mixed with ‘Santa Claus Is Comin’ to Town’ with me on drums and Tyler (BNL drummer Tyler Stewart) out front singing lead,” Robertson says on behalf of long-time bandmates Stewart, multi-instrumentalist Kevin Hearn, and bassist Jim Creeggan.

“‘Feliz Navidad’ has been thrown into our set many times and we adapt it to the holiday at hand. We’ve been known to sing ‘Feliz Halloween,’ ‘Feliz Thanksgiving.’ It has kind of been a running joke in the BNL live set for a long, long time.”

Robertson allows that the Hometown Holidays Tour will be, to namecheck a classic BNL live album from 1996, something of a “rock spectacle.”

“This tour has lots of set dressing and props and a big video wall because we made lots of original content for it,” he says. “It’s kind of a revamped, on-the-road version of what we did for hometown Toronto last year at the Mirvish Theatre,” where the band performed a series of shows highlighting their 2008 children’s-themed Snacktime! along with fan favourite and holiday songs. “This tour is a lot of work … though not for me,” Robertson, who is on sabbatical as we speak, howls. “But it’s a lot more difficult for our crew.”

And, as Robertson is a self-confessed die-hard lover of Christmas music, which classic song does he most wish he had written?

“Oh, a lot. But I am super-proud of the ones that I did write. ‘Green Christmas,’ which I wrote for the Grinch soundtrack, is one my all-time favourite songs that I have ever written. And it just happens to be a holiday song.

“I also love interpretations of classics as well as The Roches holiday album, Esquivel’s holiday album, Bruce Cockburn’s holiday record. In terms of originals, I love ‘Hold On to Christmas Day’ by the Fortunate Ones, a husband-and-wife team from St. John’s. It’s beautiful.”

Robertson continues, “Lucky for us, the tour seems to be doing great in terms of ticket sales. I think we’ve built a trust with the audience where they know they’re going to have a fun night if they come out and see the band. We are really looking forward to it.”

VoxBox: The Successor to the Legendary Speakers Corner Arrives in Liberty Village