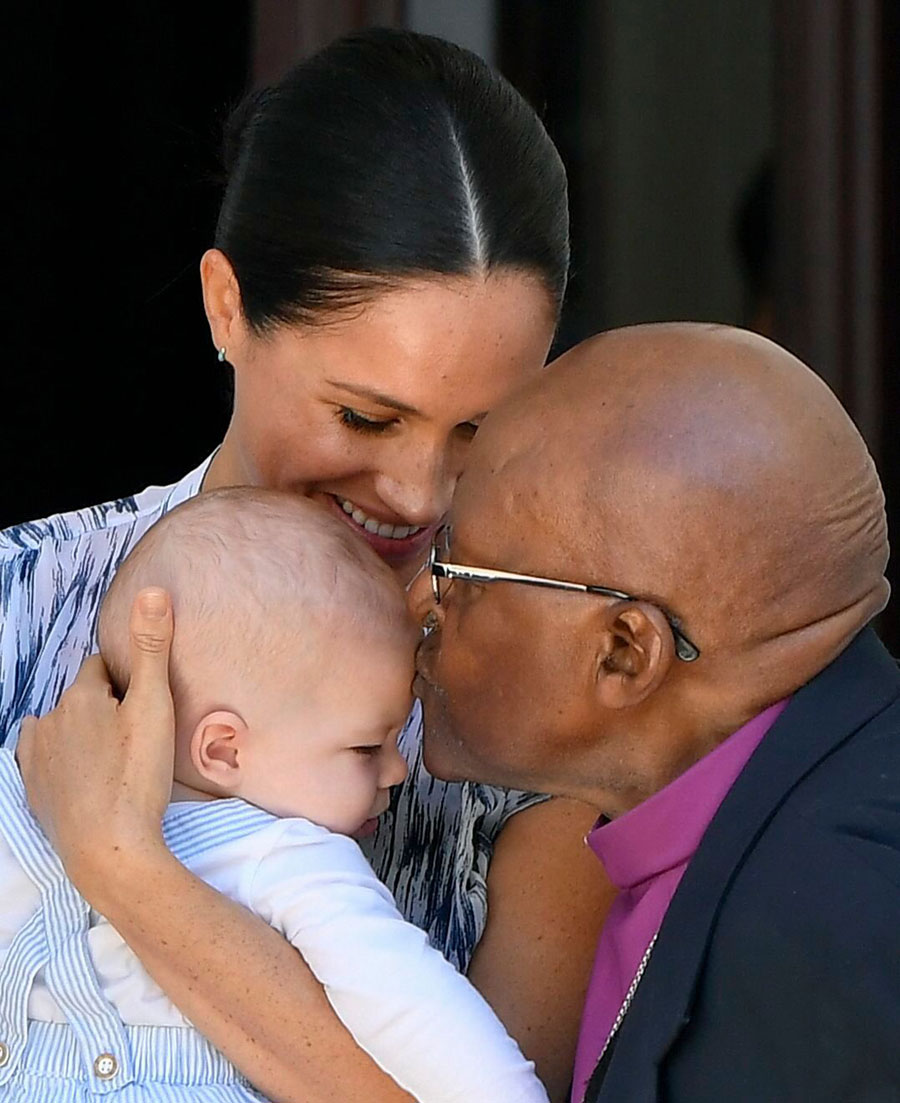 Archie Harrison Mountbatten-Windsor made his first appearance on the Sussexes’ 10-day tour of Africa, brought out of hiding to meet legendary anti-apartheid campaigner Archbishop Desmond Tutu and his daughter, Thandeka Tutu-Gxashe, in Cape Town.

The infant, held close in the arms of mom Meghan, wore a giant gummy smile and pale-blue, pinstriped overalls with a plain white long-sleeved shirt underneath.

Not to draw massive conclusions from a few images on Instagram, but at first blush it seems Archie — seventh in line to the throne — may be able to get away with less formal duds than his cousins George, Charlotte and Louis, who are third, fourth and fifth in line respectively.  Their public outfits, although undeniably adorable, tend to be more old-fashioned, as in smocking and pie collars for girls and formal shorts and shirtsleeves for boys.

Meghan kept it low key, as she has for the whole trip thus far, with a breezy but elegant blue-and-white batik-print sundress by Club Monaco. She clearly chose to co-ordinate with her boys, as dad Harry wore a sharp, slim navy suit, perfectly respectful for the meeting with the human-rights legend. Prince Harry, who last met Archbishop Tutu in 2015, cast a protective arm around his wife and son. The photos were released on the Sussexes’ Instagram account with their own cute caption — Arch meets Archie! —and they enabled the protective new parents to have some control of how and when their son’s tour debut would go.

It was also clever to make it an early-morning release, so the longed-for baby sighting would not overshadow any of the worthy causes they hoped to bring attention to on their stacked agenda later in the day. The Archbishop, 87,  has suffered bouts of poor health in recent months, but appeared at the top of the stairs of The Granary, the location of The Desmond & Leah Tutu Legacy Foundation, to greet the Sussexes with his daughter, although wife, Leah, was not in attendance.

With a cane in his hand, video of the meeting shows the Archbishop and his daughter cooing “hello” in distinct baby-talk as the new parents came up the stairs to the landing. The first thing the Archbishop did was plant a tender kiss on Archie’s forehead  before grasping Meghan’s hand in welcome.

After hugs all around, they moved inside, where Tutu-Gxashe’s peals of laughter greeted the usual baby stuff, like a little drool escaping the lips of the royal baby as mom dabbed it away. Archie was awake and alert as camera shutters fired away, withTutu-Gxashe commenting that she was used to it as she “has cameras in her genes.” Baby Archie obliged with a royal smile in response to her laughs, and she said, “Oh, you like the ladies.”

Meghan called Archie “an old soul,” as Harry commented, “I think he’s used to it already.”

Later today, Prince Harry will begin his solo journey to engagements in Botswana. Meghan has a visit to the Woodstock Exchange to meet female entrepreneurs. The WEX, as it is known, is a buzzy place that attracts creative types, such as filmmakers, photographers and fashion designers. Located in a suburb that has undergone significant urban renewal, Woodstock itself has become known for its youthful vibe and as a cultural hub.

Day 2: Mindfulness and a Mosque Visit, and Baby Archie Still a No Show