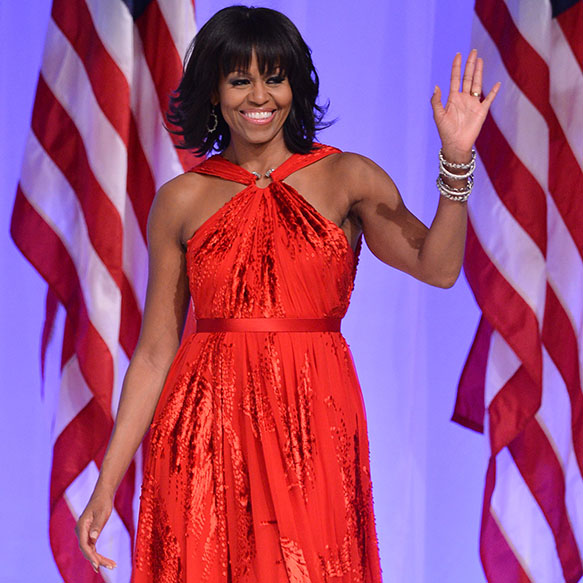 Of all the poignant speeches Michelle Obama has delivered, and all the sentiments she shared in her 2018 memoir Becoming — which re-defined the term “bestseller” to the tune of 14 million copies sold worldwide — it’s those seven simple words, spoken at the 2016 Democratic National Convention (DNC), that continue to resonate.

Obama, who turns 57 on Jan. 17, wasn’t just arming her country — and the rest of us — with a mantra by which to abide during the ensuing four-year Trump tantrum. She was exhibiting the strength, grace, and dignity that have made her the most admired woman in America.

And that admiration is actually quantifiable. On Dec. 30, 2020, a Gallup poll showed that America’s first Black First Lady is also its “most admired woman” for the third straight year. And why not?

Positivity, sincerity, the empowerment of others — they’re cornerstones of the Michelle Obama brand that resonate even more in times of social and political discord.

Obama, too, is no stranger to taking charge and leading by example. It’s what she did at the 2020 DNC, where the former First Lady helped kick off the convention that would nominate Joe Biden to contend for the American presidency by declaring, “You know I hate politics.” FiveThirtyEight dubbed her “the most powerful person in politics who hates politics” and, don’t kid yourself, there’s not a democratic-minded politician alive that wouldn’t want — or gain from — a Michelle Obama endorsement.

To that end, she also wrote in Becoming that, “If there’s one thing I’ve learned in life, it’s the power of using your voice.” And she’s proven this for years, whether using her platform to promote causes like healthy living and LGBT rights, speaking up in support of her husband, President Barack Obama, and other leaders she believes in, or packing arenas with crowds eager to hear her tell her story in person before going home to read it in a bestselling hardcover.

And Obama’s also used her voice to provide comfort to countless others by sharing some of the difficult moments of her life, writing in her memoir about personal insecurities and tragedies as well as struggles with fertility, which included a miscarriage and a turn to IVF to conceive her two daughters. It’s part of her story and part of why people love her — behind the glamorous look and brilliant mind is a woman who’s endured hardships like the rest of us.

Speaking of her glamorous look, while former First Ladies traditionally wore subdued, classic looks by designers such as Oscar de la Renta and Carolina Herrera, Mrs. Obama brought a modern, multicultural joie de viv to dressing. Having been a consumer of high fashion from ikram, an edgy Chicago boutique, she brought a fashion-forward exuberance to the East Wing. Her goal was to celebrate American designers — especially young and multicultural up and comers. She wore a ground breaking ensemble by Cuban-American designer Isabel Toledo to the first Obama inauguration and its unusual colour and shine quickly set the tone. She put J.Crew on the map by mixing their elevated basics with luxury items but retained an all-American ease — she famously wore a cardigan to meet the Queen.

No conversation about Michelle Obama’s style, however, can shy away from how politicized it was — mainly because of her race. At the beginning of the first Obama campaign, she was advised to switch from her business power suits — she was, after all, a working woman and an executive — to kitten heels and shift dresses that felt more “feminine” and allowed her to assume a Mom-in-Chief persona. But of course, those sleeveless dresses also created a national conversation about her right to bear her arms.

And lets not forget the time in 2009 when she emerged from Air Force One for a family vacation at the Grand Canyon wearing — gasp! — grey shorts. The shorts caused an uproar among some who felt that they were unbecoming of a First Lady. And while she noted in a 2013 interview with BET’s 106 & Park that she wore the shorts because “we’re on vacation,” she admitted that she regretted the choice since it “created a huge stink.”

Still, in her post-FLOTUS years, it’s no surprise that Obama’s popularity has only grown. Free from “any obligation as a political spouse,” as she wrote in her book, “I am now at a new beginning, in a new phase of life … unencumbered by other people’s expectations.”

Now is her time — a second act that’s bigger than the confines of the Oval Office or any preconceptions of what the life of an ex-FLOTUS is expected to look like.

Upon re-entering public life following two terms as First Lady, she and husband Barack signed a pair of big money deals — a multi-million dollar publishing deal for their memoirs and what’s believed to be an even bigger multi-million dollar production deal with Netflix. To that end, they also founded Higher Ground Productions (even her production company’s name is steeped in positivity!) which, in 2020, won its first Oscar, for Best Documentary, for the film American Factory. That same year Obama won the Grammy Award for Best Spoken Word Album for the audiobook version of Becoming, saw the release of a Netflix documentary based on the book and announced the new Michelle Obama Podcast. And that’s just a start.

“For me, becoming isn’t about arriving somewhere or achieving a certain aim,” she wrote in her book. “I see it instead as forward motion, a means of evolving, a way to reach continuously toward a better self. The journey doesn’t end.”

And as Obama’s journey continues with the celebration of her 57th birthday, we’re marking the occasion with a collection of some of our favourite looks, which you can see by clicking on the image at the top of this article.