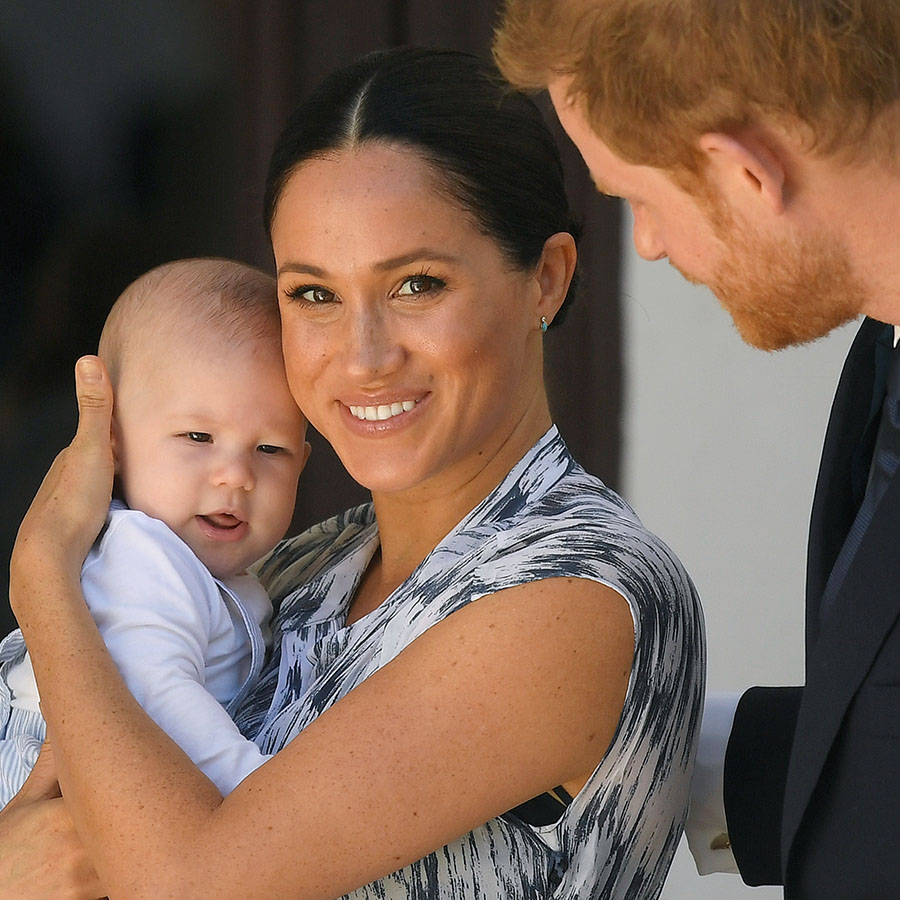 In a television appearance this morning, Oprah specified that Prince Harry told her that neither the Queen nor Prince Philip questioned the skin tone of their great-grandson Archie — seen here with mom Meghan and dad Harry during their royal tour of South Africa in 2019. Photo: Toby Melville — Pool/Getty Images

Fresh revelations spilled over into this morning’s talk shows as the blockbuster Oprah interview with Meghan Markle and Prince Harry exploded into headlines around the world.

Oprah herself took to the airwaves on CBS This Morning, the broadcast network the interview aired on and the show helmed by her good friend Gayle King.

The fabled host came to add a few more jaw-dropping details that didn’t make the special’s two-hour cut: chief among these is that the relative who purportedly engaged in colourism was neither the Queen, nor Prince Philip. Meghan, in a claim later confirmed by her husband, Harry, says a senior member — whom Harry refused to name — questioned while Meghan was pregnant what skin tone the baby, now little Archie, might have and what that might “mean.” It is resonant, and painful, and ironic, that this interview took place on Commonwealth Day: an estimated 60 to 70 per cent of Commonwealth inhabitants are persons of colour.

Needless to say, the worldwide guessing game on this story — and all the gobsmacking details revealed over the past two days — has the world waiting with bated breath for a full palace response. Royal communications staff are not answering phones, which must surely be blowing up palace switchboards; senior royals are said to be locked down in crisis talks: Richard Palmer of The Daily Express wrote on Twitter: “Crisis meetings continue in the Royal Household. Every single person authorized to speak to the media has had their phone switched off, as far as I can tell. And it’s not just me they aren’t taking calls from.”

There are two sides to every story. Actually, there are three: both parties have their own perceptions and interpretations of events. Then there is the truth. In the case of Team Sussex versus The Firm, we may never know the whole truth, but there are certainly more details that will flow out of last night’s revelations to build a clearer picture over time.

There are also two competing national identities: the British devotion to duty above self (in this case, duty to the Queen and Crown) and the American emphasis on freedom of speech and liberty in the pursuit of one’s own happiness. Neither is better; neither is right: they are simply different national identities.

The White House weighed in this morning with a statement praising the Duchess for coming forward to share her struggles with her mental health.
Canada, a Commonwealth country that defines itself in opposition to its oversized neighbour but also North American in viewpoint, lies in a unique space somewhere in between the two citizenships melded in the Sussex household.

When asked if Canada should rethink its ties to the House of Windsor after the interview, Prime Minister Justin Trudeau said, “Obviously, I wish all members of the Royal Family the very best. But my focus, as we’ve said, is getting through this pandemic.”

For his part, British Prime Minister Boris Johnson refused to comment on the explosive allegations, saying only that he had “always had the highest admiration for the Queen and the unifying role that she plays in our country and across the Commonwealth.” He went on to say that “when it comes to matters to do with the Royal Family, the right thing for a prime minister to say is nothing.”

Thus, as we decode what has happened in the Oprah interview, and speculate about what it all might mean for both the Sussexes and the future of the monarchy and its senior leadership, we would do well to take it all with a couple of grains of salt. After all, many things can be “true” at the same time.

One thing that is true is that Meghan and Harry were clearly in grave distress during their time as royals. No refutation of details and facts changes that. That the pressure of the tabloid press and racist behaviour within and without left her feeling suicidal is tragic. What is unforgivable is that she was not allowed to seek professional help. This from a monarchy that has invested much time and resources among its junior members in promoting access to mental health initiatives, from the Heads Up initiative to Give Us a Shout crisis counselling via text service William and Kate have been working with this very week.

Here are some further reveals from clips.

“Did you leave the country because of racism?” asked Oprah of Harry in a fresh clip shared this morning. He responded: “The UK press is bigoted. If the source of information is inherently corrupt or racist or biased then that filters out to the rest of society.”

This new part of the interview buttresses claims that were part of the original interview, wherein both Harry and Meghan discussed how the press and the palace brokered deals to collude on coverage. Meghan contended that the palace was willing to lie for other members of the royal family, but not tell the truth for the Sussexes. She said the family would tell her, “We’ve all had to deal with things that are rude.” Well, said Meghan: “Rude and racist are not the same.”

Further, we saw a clip showing that even the Queen is held back by her advisors. For those wondering why Meghan wasn’t asked about her own family in the interview, those clips also aired this morning.

Meghan said she told her father that the palace could intervene in the story about him selling stories to the tabloids, if only he told her the truth. Meghan responded: “He wasn’t able to do that. And that for me has really resonated, especially now as a mother,” adding this one intervention would be her using up an irreplaceable card with the royal press office. “And also me saying just full stop, if we use this to protect you, we won’t be able to protect our own children one day. Well, I’m talking about your grandchildren, so I can’t — I mean, I look at Archie. I think about this child and I go I can’t, I genuinely can’t imagine doing anything to intentionally cause pain to my child.” Oprah put less of a fine point on it: “So basically, he lied.”

The fact checking has now begun. The Telegraph today, listed the items which are open to different interpretations, suggesting how the royal family might be able to respond to the accusations. First, the claim that Meghan did not know about the royal family before she joined them is admittedly naïve-sounding and stretches the imagination. The Telegraph points out that she had a copy of the Andrew Morton book, Diana: Her True Story — the one, it was eventually revealed, that the former Princess of Wales had participated in and informed — was on her bookshelf, according to a childhood friend.

The subject of Archie’s title is also easy to dispute: there is a statue in place, that has been in place since 1917, that says Archie will be eligible for an HRH designation when his grandfather Charles ascends the throne, but not before. Further, decisions on security — which Meghan linked to the HRH title, are made by the Metropolitan Police and not the palace.

As to the matter of her passport and driver’s license, the Duchess did fly to New York for her high-profile, celebrity-stacked baby shower. And there are many examples of royals driving themselves, from the Queen to Kate to her own husband, whisking them away to the wedding reception in Charles’s vintage Aston Martin. These claims do make the Duchess look a tad hyperbolic, and undermine her more serious claims.

At this point in the emerging scandal, two things are clear. One is that Harry is very much Diana’s son, and that Meghan shares some of her attributes as well. This interview is as incendiary as the Panorama interview of 1995, where not only did Diana talk about how there “were three of us in this marriage,” but also suggested that William should be made King over Charles, as he was unfit. She also shared intimate details of the costs being a palace prisoner had to her mental and physical health.

There is a moment where Harry refers to how Meghan shone on their tour of Australia, New Zealand, Fiji and Tonga. Mirroring Diana’s massive success on a similar early in their marriage tour with Charles, 35 years ago, it was the moment Meghan showed what she could do in terms of working a rope line with high-wattage charisma. As Harry said last night, “It really changed after… the South Pacific tour. That was our first tour. It was also the first time the family got to see how incredible she is at the job. And it brought back memories.”

He is obliquely referring to how Diana outshone Charles. And he was intimating that Meghan would outshine the Cambridges and his mother and stepmother today. Further, Harry said they had proposed living in the Commonwealth — beyond Canada, Australia, New Zealand  and South Africa were floated — but it is rumoured that the palace feared they would establish a satellite court. They were jealous, was Harry’s message, the same way they were with Diana.

Did Diana mean to blow up the monarchy? We can never know the true motivation. Twenty-five years later, though, that interview is more relevant than ever as her son and daughter-in-law follow in her footsteps. Do Harry and Meghan intend to take down the monarchy? The monarchy survived that episode with Diana, and the criticism around her death a few years later.

But one thing is clear: the palace machine — the “institution” and “the Firm” in Harry and Meghan’s words — meaning the long-serving influential courtiers, “the men in grey suits,” around the Queen and her heirs are, as some pundits have suggested, akin to a “deep state,” protecting the crown and its heirs at all costs. Harry revealed, in a story of a cancelled lunch with the Queen, that even the monarch doesn’t have full control over her life and choices. Thus Harry and Meghan were — as Diana post-Charles herself was — collateral damage in that singleminded focus.