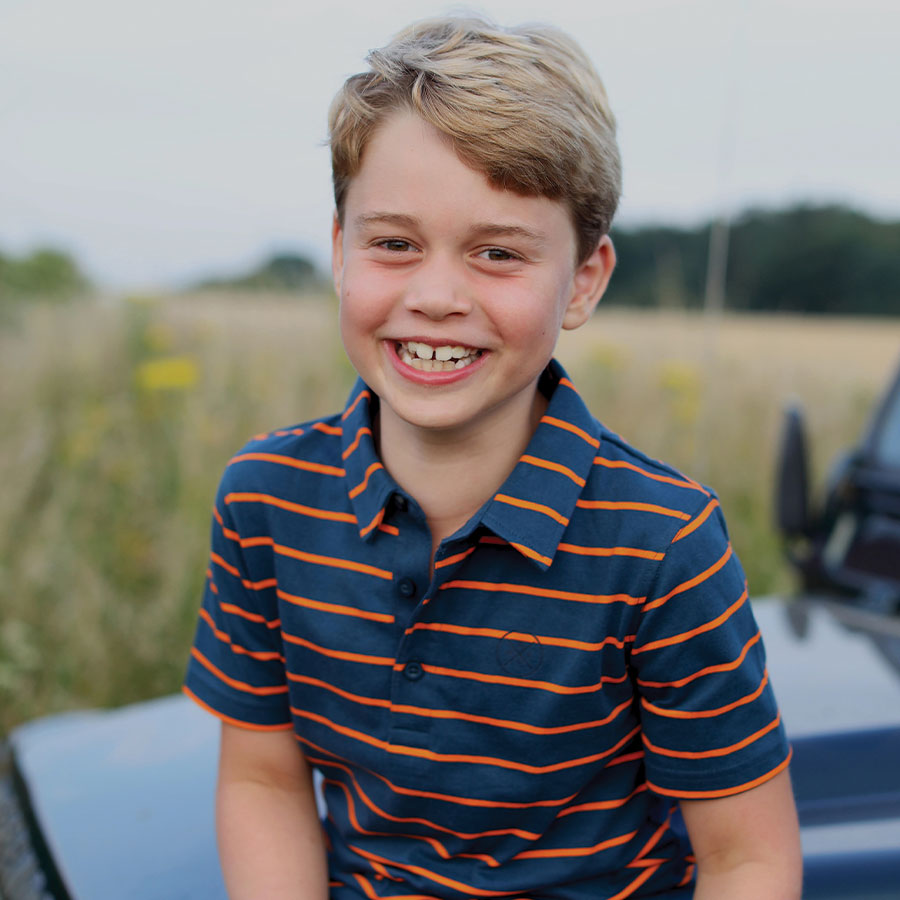 Just weeks after charming the world as he cheered on team England at the Euro Cup, Prince George celebrates his eighth birthday today.

Keeping with tradition, mum and talented amateur photographer, Kate, 39, Duchess of Cambridge, has taken a new portrait of the young royal to mark the occasion. Flashing a beaming smile for the camera, the birthday boy is outside, sitting on a Land Rover Defender — which is likely a tribute to George’s late great-grandfather, Prince Philip, who owned multiple versions of the vehicle and passed away at the age of 99 in April.

Sporting a new shorter hairstyle, the prince — who is third in line to the throne, behind his father, Prince William, and grandfather, Prince Charles — is wearing a blue and orange striped navy polo shirt with matching shorts.

“Turning eight(!) tomorrow,” the Duke and Duchess of Cambridge wrote on their posts on Instagram and Twitter. In honour of the big day, they also included celebration and birthday cake emojis.

The photo, which was taken at at the Cambridge family home in Norfolk last month, has many royal watchers commenting how much George looks like his father, Prince William, 39, despite his marked resemblance to his maternal grandfather, Michael Middleton.

Kate and William expressed their thanks for the many birthday wishes, writing: “Thank you for all your lovely messages on Prince George’s eighth birthday!” The family will reportedly celebrate his birthday privately.

In honour of his 8th birthday, we look at 8 of our fave Prince George royal moments, starting at present day and going back to his first official photograph.

Prince George looked every bit the image of a king-in-training when he dressed in a suit and tie — just like dad — for both of his Euro Cup stadium appearances. (Remember, George has long been a style icon, even rating on GQ’s “50 Best-Dressed Men in Britain” list in 2015.) His enthusiasm after England defeated Germany in the semi-finals put him on the front pages, a good luck charm for the pandemic-weary, football-crazed country.

The Royal Family, including the Cambridge kids, were highly visible in their support of the nation during the long months of pandemic lockdown. Here, Prince George, along with his siblings, Princess Charlotte and Prince Louis, are seen participating in the Clap for Carers campaign last year, in support of the National Health Service (NHS) for their efforts in fighting the coronavirus.

3. Interviewing David Attenborough — And Being Gifted an Ancient Fossil

Last fall, the famed British broadcaster and naturalist David Attenborough arrived for a Kensington Palace visit with the Duke and Duchess of Cambridge and their family. And while there, the 95-year-old presented George with a fossil tooth from a giant shark called Carcharocles from the Miocene period some 23 million years ago.

Royal watchers were also treated to rare video footage of the Cambridge kids as they quizzed Attenborough about wildlife and the natural world. It was the first time George and his siblings were heard speaking in public.

4. Heading to His First Day of School

The little royal, 4, looked slightly nervous as he arrived for his first day of classes at Thomas’s Battersea school in south London. He was wearing his school’s “summer uniform” —a blue button-down shirt beneath a navy v-neck sweater and matching shorts. Here, he is seen greeting Helen Haslem, a senior teacher who later introduced him to the other students.

5. Canada Gets the Royal Treatment

Three-year-old Prince George and 15-month-old Princess Charlotte stole the show when they joined their parents on their 2019 royal tour of British Columbia and Yukon. Here, Kate is seen wearing a royal blue Jenny Packham suit with a matching hat, while the ever-adorable George is wearing a blue sweater and shorts with knee socks.

Royal insiders say that the young prince has an especially close relationship with his 95-year-old great-grandmother, the Queen, whom he calls “Gan Gan.”

Here, they are seen chatting at Princess Charlotte’s christening (July 5, 2015). Another pic from 2016 shows George posing for a postage stamp with his father, Prince William, grandfather, Prince Charles, and the Queen herself.

7. Meeting President Obama in a Bathrobe

In what has to be the most adorable photo ever, two-year-old George greeted the President of the United States, on a 2016 visit to London, in a mini-white robe and pyjama pants. He reportedly was allowed to stay up late to meet the Obamas, who gifted him with a rocking horse. Earlier that day, 94-year-old Prince Philip famously drove the President and First Lady, the most protected couple in the world, in his Range Rover to a lunch honouring the monarch’s 90th birthday.

The first official photos of the baby prince were released nearly a month after his birth. Instead of taking the customary professional portraits, William and Kate opted for a more informal route. The duchess’s father, Michael Middleton, snapped the photos in the garden of their family home in Berkshire. Pictured with them is beloved family dog, Lupo, who sadly passed away this past November.

Putting the Family in Royal: As England Loses Euro Final, Kate and William Comfort Prince George, Signalling a New Era for Parenting and the Crown