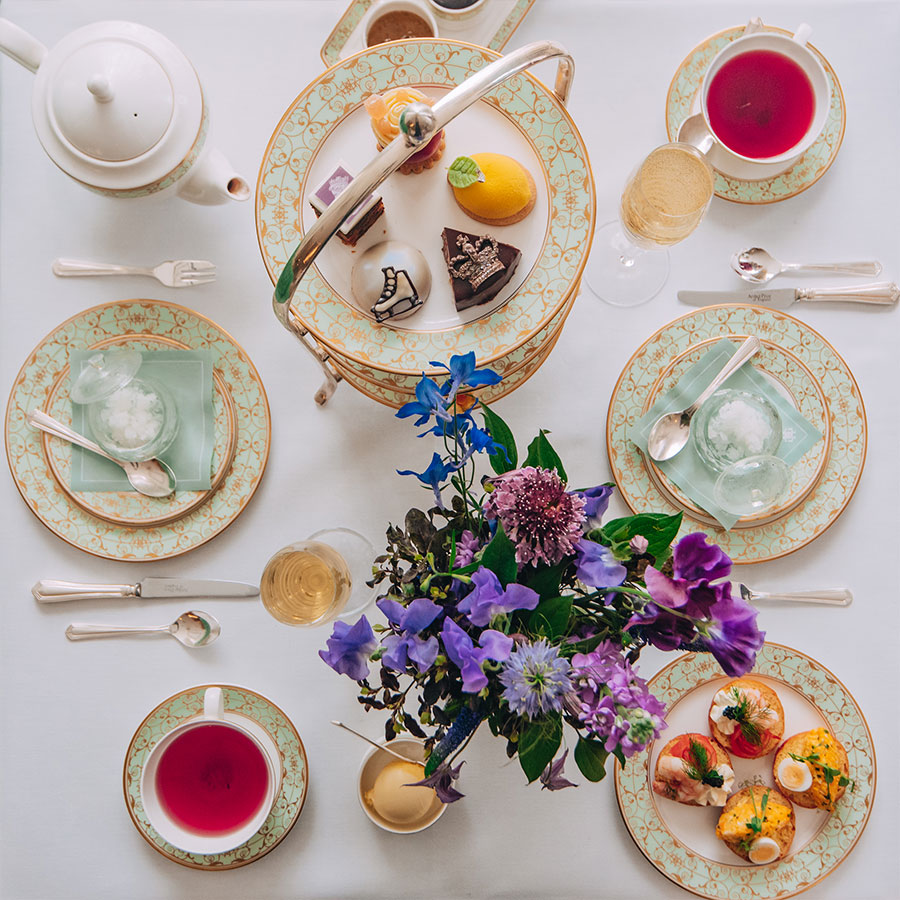 One of Her Majesty’s favourite treats is Chocolate Biscuit Cake, pictured above as part of a Jubilee tea menu. Photo: Courtesy of JW Marriott Grosvenor House London

For armchair travellers and monarchists alike, why not have your own Big Jubilee Lunch? Herewith, we present a menu fit for a Queen, borrowed from some of the most storied hotel kitchens and country houses around England. Champagne: Bollinger has had a royal warrant —  given to companies that do significant business with the Royal Family —  since Queen Victoria’s days. Pol Roger also holds a royal warrant and the Queen has been known to serve the bubbles at her functions.

When I visited Claridge’s this spring, I discovered staff at this storied Mayfair hotel have long called it the “annex of Buckingham Palace” (because the Windsors, et al., often come here to party). To celebrate the Jubilee, visitors can view some of its royal memorabilia: handwritten letters from the Queen Mother, entries from Queen Victoria’s diaries, a vintage fan created for the coronation of King George V (Queen Elizabeth’s grandfather) and photographs from Queen Elizabeth’s 1953 coronation. Stop in at Claridge’s Bar or The Fumoir, a snug secret bar off the lobby, where they are mixing up special cocktails, including a modern take on the Windsor Rose, served during the coronation year, as well as The Royal Stag.

Square of 75% dark chocolate, to garnish

Stir all the ingredients but the chocolate in a mixing glass, then strain into a chilled rocks glass over an ice block. Garnish with the square of chocolate.

Cliveden House was home to Frederick, the Prince of Wales, in the 18th century, as well as Harriet, the Duchess of Sutherland, a confidant of Queen Victoria and her Mistress of the Robes. Nancy Astor, the American heiress who was first woman to sit in the British Parliament, was lady of the house in the 1920s and ’30s, where she hosted politicos of the day, dubbed the Cliveden Set. But some may remember it as the centre of the scandalous Profumo Affair, where, in the early ’60s, British former secretary of state John Profumo began his “business” with 19-year-old model Christine Keeler, who was also dating a Russian operative. The whole mess eventually brought down former prime minister Harold Macmillan’s government a few years later.

Filling for 4 to 6 soft rolls, depending on the size of sandwiches

Sweat shallots with curry powder and cinnamon, cooking for 10 minutes; then chill and add remaining ingredients.

The Rosewood London, a gorgeous example of Edwardian architecture, was home to many lords, including philosophers Sir Francis Bacon and Sir Thomas More, poet John Milton and Charles Dickens, who wrote The Pickwick Papers there. No surprise, as Bloomsbury, where Virginia Woolf held court, and the University of London are but a stone’s throw away.

1. Prepare the pork shoulder by dicing into chunks suitable to fit through the mincer  attachment of your mixer. Remove any excess sinew or cartilage.

2. Mince the pork shoulder into a large mixing bowl.

3. Crumble the white pudding into the sausage meat. Add the rosemary, salt, white pepper and cayenne pepper. Mix well, then separate into balls of 80 g each and place in the fridge.

4. Bring a pot with enough water to cover the eggs to the boil and carefully place four eggs in. Boil for 5½ minutes, then remove and put the eggs in a bowl of ice water. Leave the eggs for 5 minutes to cool completely and then peel the shell off and dry.

5. Take 3 bowls, put the flour in one, and the panko breadcrumbs (lightly crush some of the panko in your hands for a little for texture) in another. Beat the 2 remaining eggs  with the milk in the third bowl.

6. Flatten out the balls of sausage mix and wrap evenly around the boiled eggs, making sure the eggs are snug in the meat. Dip into the flour, dust off any excess, dip in the egg mix and finally in the panko breadcrumbs.

8. Let them rest for 1 minute before eating.

Situated next to New Forest National Park, William the Conqueror’s hunting grounds, Chewton Glen Hotel & Spa is also home to a renowned cooking school. The country house hotel features treehouses as part of its accommodations: If you recall, it was Elizabeth who went up to bed in a treehouse in Kenya as a princess, and came down the next morning as Queen.

Strawberry jam to spread over top of one cake

Dash of vanilla or vanilla beans

Fresh strawberries, cut in half; enough to spread over top of one cake

1. Warm eggs and sugar over a water bath to 40 C (100 F). Then whisk in the mixer until thickened to a firm, sauce-like sabayon consistency.

3. Fold flour first into the eggs, then the butter.

5. Turn out onto a cool on a wire rack. Once cool, take one sponge and trim the top until level and then spread with strawberry jam.

6. Whisk double cream with vanilla or vanilla beans, spread on top of the jammed sponge, then press in enough strawberries cut in half to cover the surface.

7. Top with the second sponge and sprinkle with icing sugar.

For 10 years, Carolyn Robb was the personal chef to Charles and Diana, and Princes William and Harry. Robb’s cookbook, The Royal Touch: Simply Stunning Home Cooking from a Royal Chef , is a collection of 100 recipes — including the Chocolate Biscuit Cake Prince William chose as his groom’s cake, which Robb shares here — as well as anecdotes and letters from her residency at Kensington Palace.

One of Her Majesty’s favourites, visitors can try it at The Park Room (formerly the ice rink where Elizabeth learned to skate as a young girl), at JW Marriott Grosvenor House London, as a version using Valrhona chocolate is on the hotel’s Jubilee tea menu.

Selection of small chocolate sticks, and dark and white Maltesers or Whoppers

1. Melt the butter with the golden syrup in a heavy-based pan. Do not let it boil. Remove from the heat and add the cocoa powder, dark chocolate and vanilla extract. Stir until you have a very smooth, glossy mixture. Add the pistachios, figs and crushed biscuits to the chocolate mixture and stir well.

2. Line the base and sides of the cake tin with baking parchment or plastic wrap. Place the mixture into the tin and press it down. (If you are using a square tin, make sure you press it down well into the corners.)

3. Leave to cool at room temperature before covering and chilling in the fridge. It will take about 2 hours to set completely firm. When set, remove from the tin and place it on a cooling rack.

5. Decorate with the Maltesers before the chocolate sets, so they stick to the cake. Position chocolate sticks as desired and drizzle with the white chocolate.

6. Store in an airtight container in the refrigerator. Keeps for up to two weeks.

‘The Platinum Jubilee Cookbook’: A “Coming Together of British and Local Influences” — Plus, a Delicious Take on Sausage Rolls

Meghan and Harry Say They Will Attend Platinum Jubilee With Their Children, as Royal Family Shares Photos for Archie’s 3rd Birthday