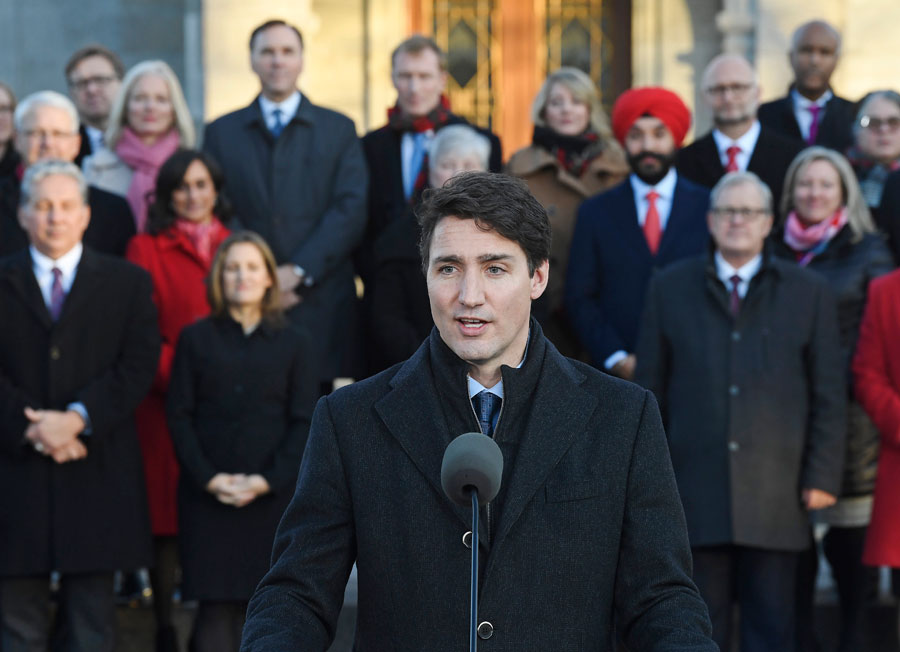 Prime Minister Justin Trudeau unveiled his new cabinet on Wednesday, a team of 37 ministers who will help the government advance its agenda in a minority government.

With his mother Margaret Trudeau looking on from the front row of the Tent Room at Rideau Hall, the Prime Minister announced his new team, who were sworn in before Ian Shugart, the Clerk of the Privy Council, welcomed by Governor General Julie Payette and made their way over to Trudeau for the obligatory embrace.

In a press conference following the swearing in, Trudeau said the two main legislative priorities of his new government would be economic growth and climate change.

But beyond new policy measures, Trudeau said his cabinet would concentrate on unifying a country left fragmented by the federal election, an undertaking that will only be achieved by putting partisan differences aside.

“Canadians sent us a message, they expect us to work together,” said Trudeau. “To pull the country together … we will work hand-in-hand with all parties in the house. We recognize that this Parliament will be one in which collaboration is going to be incredibly important.”

Today’s cabinet unveiling was much different than 2015, when Trudeau and his newly minted Liberal government rolled into Ottawa on a wave of popularity and the proceedings were imbue with a giddy “sunny ways” vibe. This time around, the Prime Minister’s tone was starkly different, likely a result of the chastening he received over the SNC-Lavalin, Blackface scandals and being handed an election win that is accompanied with the asterisk of a minority government.

Trudeau also chose not to enter the room with his new cabinet, arriving with wife Sophie Gregoire Trudeau and the kids instead. He seemed to be trying to project a more serious tone — even his hugs seemed subdued — suggesting this government is ready to roll up its sleeves and get to work, and that substance might trump style this time around. (Or “more work, less woke,” as CBC pundit David Cochrane quipped.)

Trudeau returns to Ottawa to face a much-changed political landscape, where the Liberals not only form a minority government, but they must deal with a resurgent Bloc Quebecois in Quebec and angry and isolated voters from Alberta, Saskatchewan and Manitoba,  where the party has no sitting members.

The new cabinet, once again gender balanced, wth 18 female ministers and 19 male ministers. It constitutes a major shake-up of roles that were established in the previous government. While there are some familiar faces in established positions — Bill Morneau remains Finance Minister and Dave Lametti returns as Justice Minister and Attorney General (a role he assumed after Jody Wilson-Raybould) — many members of the new cabinet will have to learn brand-new portfolios.

This list includes Chrystia Freeland, who starred as Foreign Affairs minister in the last government, much celebrated for her the successful renegotiation of the new free trade agreement with Mexico and the U.S. She takes on the role of Deputy Prime Minister and Minister of Intergovernmental Affairs, a powerful posting that many view as a launching pad for someone with leadership aspirations. The appointment of Alberta-born Freeland is also seen as a symbolic outreach to West. Her old portfolio is assumed by Francois-Philippe Champagne, the former minister of International Trade.

Another appointment of note is Patty Hajdu, who becomes the new Minister of Health. Hajdu, who has served as both Minister of Status of Women and Minister of Employment, Workforce Development and Labour will have to demonstrate an ability to work with the provinces, not only to steer through the promised national pharmacare plan but also renegotiating health transfers.

As well, Jonathan Wilkinson moves from the Ministry of Fisheries and Oceans to become the new Minister of Environment and Climate Change, replacing Catherine McKenna who becomes Minister of Infrastructure and Communities. McKenna’s departure as Environment Minister will likely be received well in the oil patch, as she was seen as aggressively opposed to pipeline development. Wilkinson, who has worked in the clean energy tech sector, must continue to defend the Liberal’s carbon tax scheme from legal challenges. And Trudeau  buddy Seamus O’Regan returns to cabinet, this time as Minister of Natural Resources. Both Wilkinson and O’Regan will have the tricky job of balancing the pipeline expansion while protecting environmental concerns at the same time.

Trudeau also shuffled Filomena Tassi from Minister of Seniors to Labour. Tassi will be replaced by Deb Schulte, a new entry to cabinet who has a background in aerospace engineering and also served as Parliamentary Secretary to the Minister of National Revenue.

Besides unveiling a new cabinet, the Liberals also announced the appointment of Jim Carr, from Winnipeg, who will become Trudeau’s “special representative” for Alberta, Saskatchewan and Manitoba. While Carr, who was previously Minister of International Trade and before that Minister of Natural Resources, won’t sit in cabinet, he will work with ministers to help overcome the political alienation felt by many in the west.

Opposition leader Andrew Scheer criticized the size of the new cabinet, which increased from 31 to 37, calling it a “more bloated version of the same one that helped create an affordability crisis,” despite the fact that it doesn’t match up to the 40 ministers that both Stephen Harper and Brian Mulroney had.

And NDP leader Jagmeet Singh said the shuffled cabinet on it’s own won’t be enough for the government to reach its goals. “What this government needs more than new ministers is a new commitment to working with us to deliver for Canadians.”