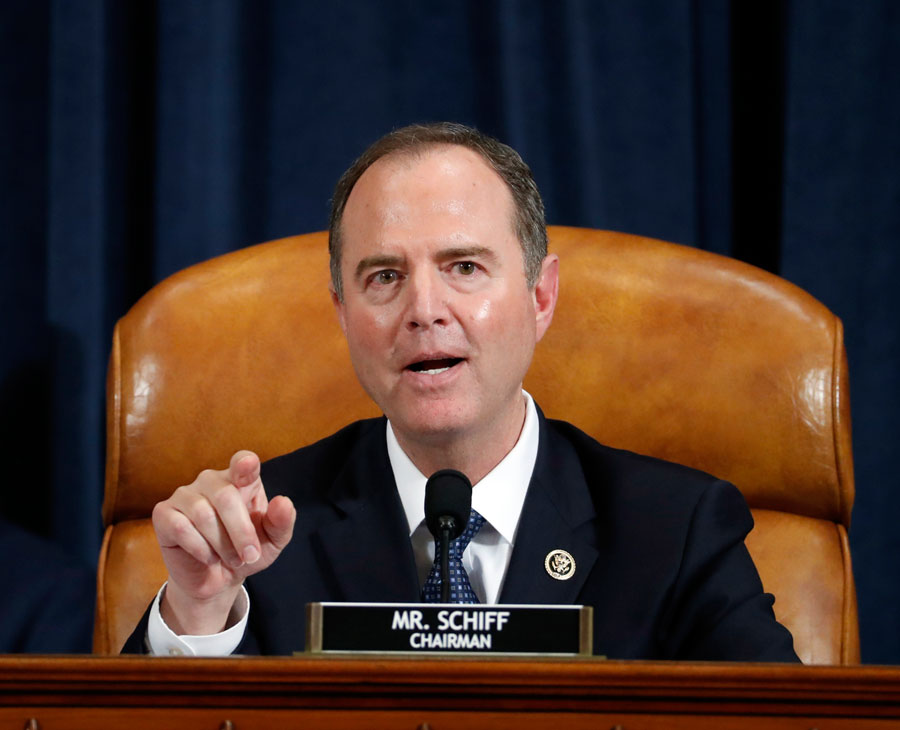 The impeachment of U.S. President Donald Trump is increasingly boiling down to a simple mathematical formula — “two plus two equals four.” This basic addition may not only determine whether the U.S. House of Representatives votes to impeach the President, but it may also bring down many powerful figures connected to him.

The “two plus two” formula is a line of argument Democrat investigators are started using in Wednesday’s impeachment inquiry, which is looking into whether Trump bribed Ukraine President Volodymyr Zelensky by offering him a quid pro quo — asking him to unearth damaging evidence against a political rival in return for the release of a military aid package for the Ukraine.

“Two plus two” is an attempt to tie the President to bribing the Ukrainian leader despite a lack of corroborating evidence because they believe the record so far can only add up to one thing — impeachment. Investigators are using “two plus two” to circumvent Trump’s operating style, which has always been to pass orders without ever actually saying anything it out loud. “He doesn’t give you questions, he doesn’t give you orders. He speaks in a code,” is how Micheal Cohen, the President’s one-time fixer who is now serving a three-year in prison, described his former boss’s mob-like M.O.

In lieu of any transcripts, emails, texts or voice recordings (the latter of which proved fateful to President Richard Nixon during Watergate hearings) that actually capture the President offering a bribe, the Democrats are relying on a flood of witnesses who have testified that, while the President made it very clear to everyone connected with the Ukraine file that that a quid pro quo  is what he wanted, he never openly stated it.

Wednesday’s testimony by United States Ambassador to the European Union Gordon Sondland confirmed this line of attack. When Sondland was asked whether the aid package to Ukraine was predicated on an investigation into Trump’s political rival — a quid pro quo — he answered, “Correct.” And when he was quizzed on whether this direction came from the President himself, Sondland answered without hesitation,  “As I testified previously … the answer is yes.” And how did he tie the two together? “It was my own personal guess,” replied Sondland. “Two plus two equals four.”

Sondland’s testimony has all but assured that the committee, which is currently in the fact-finding stage, will pass the charges of impeachment against Trump. The charges are that Trump used his position as president to bribe a foreign leader for personal gain. The central focus is the transcript of a July 25 phone call between Trump and Ukraine President Zelensky, in which Trump appears to be asking Zelensky to initiate an investigation into Hunter Biden, son of Joe Biden, a potential rival in the 2020 election. In return, the President would offer “favours,” which the Democrats say included the release of foreign aid and a White House visit.

The White House countered this assessment by arguing that Trump wasn’t holding up foreign aid to the Ukraine in order to force an investigation into Biden’s son but thatsdd he felt that the Zelensky must get serious about corruption in general if it wanted to receive foreign aid.

However, Sondland repeatedly poked holes in this rapidly crumbling line of defence, resorting to his formula to imply that Trump specifically wanted an investigation into Biden.

Adam Schiff, chairman of the House Intelligence Committee who is leading the impeachment investigation, made clear in his closing remarks that he, too, is a believer in this math. While Schiff admitted that the President didn’t actually say “the magic words — ‘I hereby bribe the Ukranians’ — there’s no mistaking what Donald Trump’s interest was.”

Investigators spent most of Wednesday asking Sondland whether he heard the “magical words” from the President. And Sondland repeatedly replied no, but he could make an accurate guess based on discussions he’d had with key Trump advisors — including Vice-President Mike Pence, former Attorney General Rudy Giuliani, Secretary of State Mike Pompeo and White House Chief of Staff Mick Mulvaney.

That bombshell was perhaps even more damning than Sondland’s mathematical calculation of Trump’s motives in that it not only implicates the President but many key players in his inner circle. Indeed, Soundland surprised everyone by throwing all the President’s men under the bus. “Everyone was in the loop,” he testified. “It was no secret.”

On the final day of hearings this week, two more diplomatic staffers involved on the Ukraine file — Dr. Fiona Hill, specialist on Russia for the National Security Council, and David Holmes, said David Holmes, a diplomatic staffer, added to Trump’s woes, testifying that they acted on the understanding that the President wanted a quid pro quo. Hill called the efforts to force Ukraine to investigate the Bidens, “a domestic political errand” while Holmes said it was “obvious” what Trump ultimate goal was — “Of course, the President is pushing for a Biden investigation before he’ll do these things the Ukrainians want.”

In the face of the mounting evidence against him, Trump remained undaunted, claiming he barely knew Sondland before criticizing the media for overlooking a key part of Wednesday’s testimony. Trump seized on Sondland’s account of a telephone call between the two in which Sondland asked the President:  “What do you want from Ukraine?” According to Sondland’s testimony, Trump responded, “I want nothing. I want nothing. I want no quid pro quo. Tell Zelensky to do the right thing.”

Trump suggests that this testimony exonerates him completely.

And many Republicans, including Rep. Brad Wenstrup (OH) countered the “two plus two” narrative: “In mathematics, two plus two does equal four. But in reality, two presumptions plus two presumptions does not equal even one fact,” said Wenstrup. “And the fact is the President did tell you … [there was] no quid pro quo.”

However, it’s looking more and more like there is enough evidence — not to mention a mathematical formula — for the House to proceed on a vote to impeach Trump.

“This is a seminal moment in our investigation,” said Adam Schiff. “I think the President was the one who decided whether a meeting would happen, whether aid would be lifted,” said Schiff. “Who had the decision to release the aid? It was one person – Donald J. Trump, President of the United States.”

There are no more hearings are scheduled and the Democrats may begin drafting the articles of impeachment by early next week. In the likely event that the Democrat-led house passes these articles, Trump will become the third President to be impeached and have to face a trial in the Senate. For Trump to be removed from office, two-thirds of the Senate would have to vote for convict him. Securing the votes of 67 Senators will not be easy as the Republicans hold a majority in the Upper House.