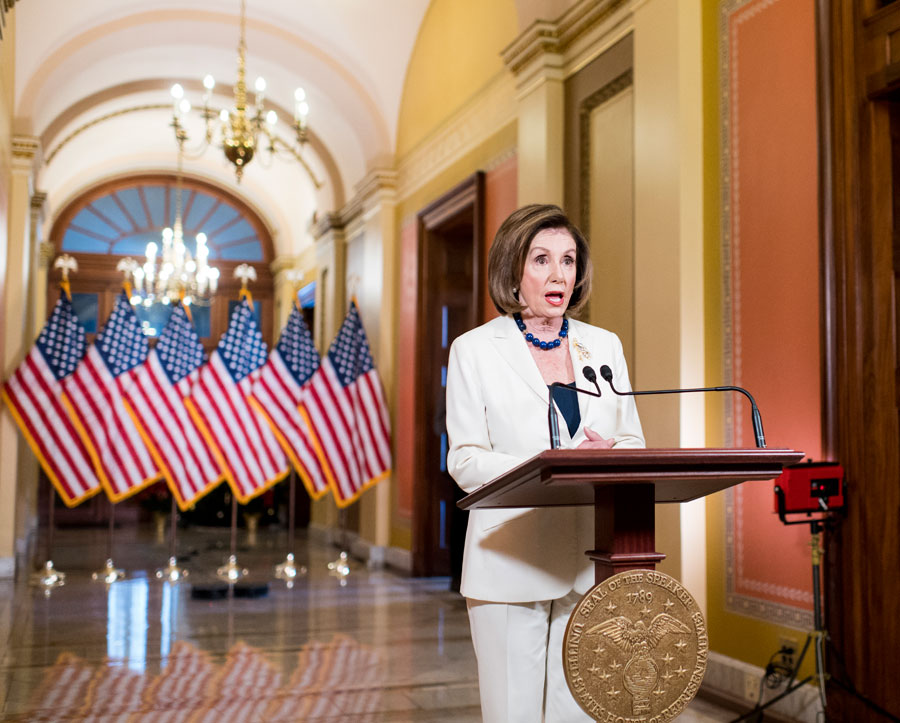 Speaker of the House Nancy Pelosi announced today that she is calling on the House Judiciary Committee to proceed with articles of impeachment against President Donald Trump. Photo: Bill Clark/CQ-Roll Call, Inc/Getty Images

The impeachment of U.S. President Donald Trump took a major step forward today as House Speaker Nancy Pelosi announced she will ask the House to proceed with articles of impeachment.

“The facts are uncontested,” said Pelosi at a press conference Thursday morning in Washington. “The President abused his power for his own personal political benefit at the expense of our national security by withholding military aid and a crucial Oval Office meeting in exchange for an announcement of an investigation into his political rival.”

Quoting one of the founders of the nation, Pelosi explained her reasons behind this drastic step: “The magistrate is not a king. The people are the king. They, therefore, created a constitutional remedy to protect against a dangerous or corrupt leader: Impeachment.”

She continued that, “In America, no one is above the law” and that “The President abused his power for his own personal political benefit at the expense of our national security.”

Although it seems more than likely that the House will vote in favour of the articles, it’s not clear when the trial will take place or how long it will take.

Earlier today, Trump tweeted that he relished the opportunity of facing trial, saying, “If you are going to impeach me, do it now, fast, so we can have a fair trial in the Senate, and so that our Country can get back to business. We will have Schiff, the Bidens, Pelosi and many more testify, and will reveal, for the first time, how corrupt our system really is. I was elected to ‘Clean the Swamp,’ and that’s what I am doing!”

The Impeachment of President Donald Trump is one step closer after the U.S. House Intelligence Committee released its summary of the evidence collected from the impeachment inquiry. It was a scathing indictment that presents “overwhelming evidence” that the President was guilty of abusing his power and obstructing justice.

The 300-page Report was based on two months of testimony by White House officials and diplomats and will be main source of evidence that the House of Representatives considers when it votes on the Articles of Impeachment. And while it it pointedly states it will leave that decision to Congress, it doesn’t pull any punches. “The impeachment inquiry has found that President Trump, personally and acting through agents within and outside of the U.S. government, solicited the interference of a foreign government, Ukraine, to benefit his re-election.”

The events leading up to the report began in August after a whistle-blower complained that Trump applied pressure on Ukrainian President Volodymyr Zelensky during a July 25 call. In that call, Trump asks Zelensky for “a favour” — namely, an investigation into political foe Joe Biden and his son Hunter. The complaint caused a furor in Washington, with Democrats claiming that Trump was trying to bribe the Ukrainian president by withholding foreign aid to Ukraine until Zelensky agreed to undertake the Biden probe. The phone call set off a series of events that resulted in Trump’s impeachment.

Tuesday’s report is a compilation of the events leading up to and following the infamous phone call. It focuses on two key areas of improper conduct by President Trump: 1) the withholding of military aid as well as an official White House meeting to Ukraine in exchange for an investigation into Democratic political foe Joe Biden and his son Hunter 2) the obstruction of the House inquiry.

The report claims that Trump’s “scheme subverted U.S. foreign policy toward Ukraine and undermined our national security in favor of two politically motivated investigations that would help his presidential re-election campaign.”

And it adds that “the president was withholding official acts while soliciting something of value to his re-election campaign — an investigation into his political rival.”

“President Trump does not appear to believe there is any such limitation on his power to use White House meetings, military aid or other official acts to procure foreign help in his re-election.”

The report also found that the president repeatedly tried to subvert the inquiry by staging “unprecedented campaign of obstruction.” Trump, it states, “is the first and only president in American history to openly and indiscriminately defy all aspects of the Constitutional impeachment process, ordering all federal agencies and officials categorically not to comply with voluntary requests or compulsory demands for documents or testimony.”

It then goes on to document hundreds of instances where the president tried to prohibit, intimidate or smear witnesses before and after their testimony to the inquiry.

Trump, who was attending the 70th anniversary of NATO in London (where he first met with Prime Minister Justin Trudeau to discuss defence spending and the status of the U.S./Canada/Mexico free trade agreement before duking it out with French President Emmanuel Macron) said that the impeachment inquiry “turned out to be a hoax.” He added, “It’s done for purely political gain. They’re going to see whether or not they can do something in 2020 because otherwise they’re going to lose.”

On Monday, the Republicans released their own report on the inquiry, calling the proceedings an “extreme course of action” undertaken to “stop President Trump’s re-election.” It defends the president on all counts, saying that rather than ordering Zelensky to investigate Biden, Trump was actually trying to unearth corruption in Ukraine and was merely seeking assurances from the Ukrainian President that “he was a true reformer.”

While the Democrats have made noises about continuing investigations, it’s expected that this report will form the bulk of evidence filed to the House Judiciary Committee. The Judiciary Committee will consider the evidence before approving the article of impeachments. It’s more than likely that the Democrat-led House will approve the articles, in which case the president will be impeached. The next step would be a trial in the U.S. Senate. If more than two-thirds of the Republican-dominated Upper House vote to convict Trump, he will be removed from office.