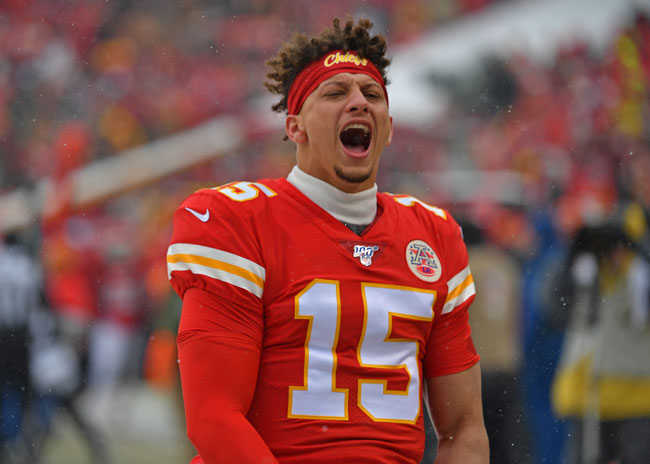 Super Bowl LIV pits the high-octane offence of the Kansas City Chiefs against the sturdy defence of the San Francisco 49ers.

And while football fans will watch closely Sunday night to see which of these two gridiron philosophies ultimately triumphs (remember that despite the glitzy ads and cringe-inducing halftime show there’s an actual game being played out there), this year’s Super Bowl represents a coming-out party for two marquee quarterbacks, neither of whom are named Tom Brady.

Yes, we may be witnessing the end of an era, that marvellous two-decade run of sustained excellence by the New England Patriots quarterback, who may just be the sport’s greatest. Brady, now 42, will be watching the game on TV like the rest of us. And instead of passing to receivers like he’s done in his six Super Bowl victories since he broke into the league in 2000, this year he’ll be handing off the torch to Jimmy Garoppolo or Patrick Mahomes, the latter of whom is being touted as the next great quarterback.

Brady, who is well aware that his time at the top is drawing to a close, posted this enigmatic photo on Twitter, causing social media to explode in a frenzy of speculation — was the great TB12 foreshadowing his retirement? Or was he simply signalling that he’s ready to yield the field to the younger generation of stars.

The 49ers starting quarterback Jimmy Garoppolo, who played Brady’s understudy in New England before making a name for himself in San Francisco, has learned well from his mentor. Garroppolo is a thinking man’s quarterback, reading the field well and never appearing to panic or lose his cool. Off the field, he’s got Brady-style marketing potential. It certainly doesn’t hurt that he’s blessed with  movie-star good looks — a Hollywood studio might cast a young George Clooney to play him. “Jimmy Gorgeous” is how the sports radio jocks refer to him, a nickname that’s elicited a great deal of friendly jest, especially from female reporters.

But it will be Garoppolo’s opponent on Sunday who has the best chance to dethrone Brady as America’s favourite quarterback — the Kanas City Chiefs pivot Patrick Mahomes. Still only 24, he can read the defence and throw as well as anyone in the NFL. But he also adds an element to his game that Brady, a pure pocket passer, never enjoyed. If Mahomes’ receivers are covered, it’s no problem. He’ll just tuck the ball and run right past the defenders.

Mahomes is quick and elusive and when he’s at the top of his game, he’s almost impossible to defend. It’s almost unfair how many ways he can slice through the stoutest defence and break its morale in the process. After making a spectacular play, throwing deep to one of his talented receivers or diving for the end zone, he celebrates with a confident swagger that might irritate old-school fans but certainly resonates with the new generation, who absolutely adore him.

Mahomes is young, exciting, athletic, hyper-competitive, brash and has a unique flair — that hard-to-explain “it” factor — that appeals to a wider audience who may not even be interested in the sport. That he’s also bi-racial is an added bonus to the NFL, a league that faces constant criticism for being behind the cultural curve. Sensing a good thing, the NFL is building much of its marketing strategy around the young superstar. This season, Mahomes sold more jerseys and sports apparel than Brady, something no one in football has done for the last 17 years.

While Brady is still active and popular (he’s No. 2 in jersey sales) — an amazing enough accomplishment for a 42-year-old who has somehow survived two decades in this the most violent of sports — his play this year wasn’t up to his usual standard. Yes, he’s proven the doubters wrong before, and may go on to win yet another Super Bowl at age 43. But to close observers, his skills seem to have eroded to the point where he’s now just an average quarterback.

This raises an interesting question about Mahomes — while he’s ready to step into the role of America’s quarterback, can he match Brady’s 20 years of relentless excellence?

Mahomes is blessed with athletic ability far beyond that of Brady. But Brady stayed on top by slavishly dedicating his life to football, studying hours of video and adopting an absurd workout regimen (that includes abstaining from alcohol and being in bed by 9 p.m.) that few can match. His ability to live and breath the sport — and not letting anything from the outside world disrupt this robotic focus — has made him a top flight quarterback and kept him playing at such a high level for so many years.

If Mahomes wants to match Brady’s super longevity, he’ll have to channel that same dedication. Because even if he enjoys the rewards that come with being a celebrity quarterback, he’ll still have an excellent career. But if hopes to surpass Brady’s lifetime accomplishments, he’ll have to adopt the same steely focus to studying the game and staying in shape, avoid serious injury (a tall order for a running QB) and never once put anything in life ahead of football.

The big question about Mahomes, though, is does he even want make that sacrifice? Does he have that competitive drive that separates the all-time greats from the one-hit wonders?

We’ll know the answer in 20 years. But for now, let’s enjoy what this young phenom is capable of accomplishing on the field. Because  I guarantee you that during this year’s Super Bowl there will be several magical Mahomes moments that will lift you out of your seat and have you shaking your head in wonder.

Nothing Motivates Tom Brady More Than Calling Him Too Old