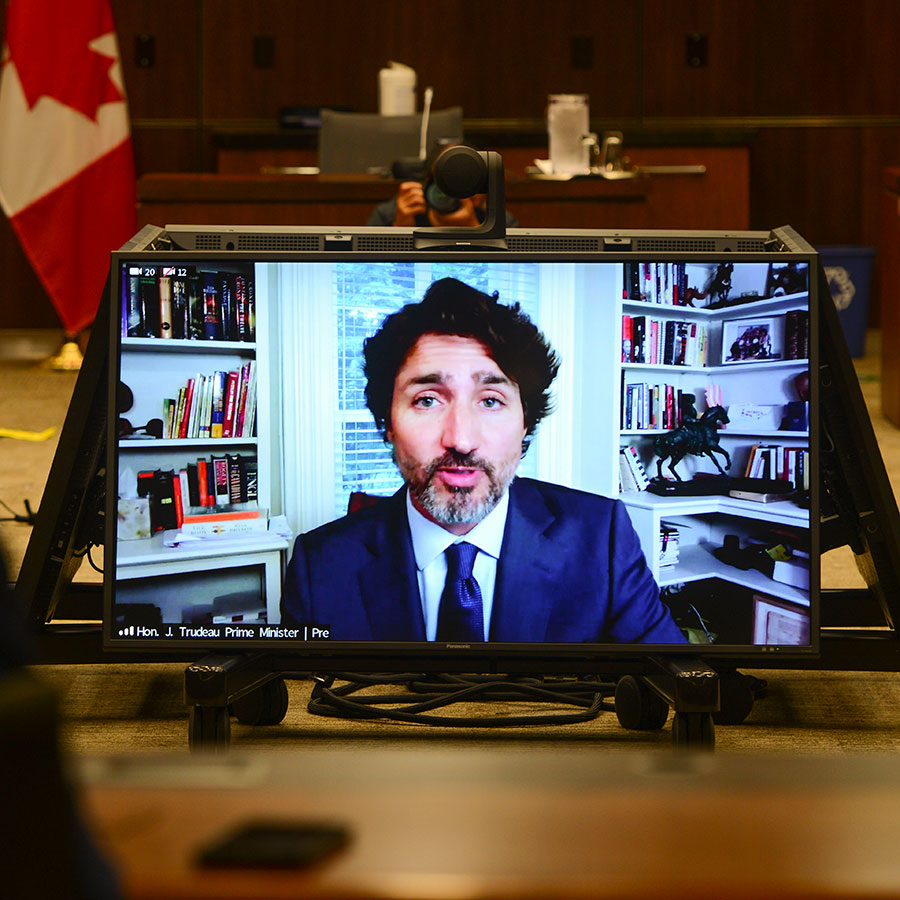 Prime Minister Justin Trudeau appears as a witness via videoconference before the House of Commons finance committee on Thursday. Photo: The Canadian Press/Sean Kilpatrick

All eyes were on Ottawa on Thursday as Prime Minister Justin Trudeau testified before a House finance committee, hoping to defuse the conflict of interest allegations that surround his party’s role in the WE Charity affair.

Trudeau repeatedly emphasized that it was the public service that made the controversial decision to award the WE Charity a massive contract to administer the Canada Student Grant volunteer program.

He added that “I had no interaction with people from WE in recent months. Neither myself or my office was involved in any arrangements with the WE organization.”

The committee is looking into allegations that Trudeau and the upper echelons of the Liberal Party violated conflict-of-interest guidelines when they awarded $20 million government contract to the charity group WE, a children’s charity founded by Marc and Craig Kielburger.

The contact was eventually cancelled when it became known that Trudeau’s family and one minister had received money from WE in the past.

The WE Charity, which stood to gain $20 million from this contract, testified earlier this week that “the organization did not stand to financially benefit” from the government contract. “We did this to be of service to the government. Not for government to help us,” Craig said.

And he denied close ties to the Trudeau family. “I’ve never seen the Prime Minister or Sophie Grégoire Trudeau in a social setting,” Craig testified.

Whether the Kielburgers know the Trudeaus socially or not is not the issue. The big problem is that the WE founders have rewarded Trudeau family members with big fees for speaking engagements on behalf of the organization. This led the NDP’s Charlie Angus to suggest that “the Kielburger brothers carefully cultivated their relationship with you and your brand,” an assertion which Trudeau energetically denied, saying he had cleared his and Sophie’s role with the ethics commissioner.

Trudeau Knew Decision Would be Scrutinized

The back-and-forth questioning became extremely testy at times, as Trudeau re-emphasized that he had no role in making the decision to award WE the contract and that any ties to members of his party or his family members had to the organization did not influence the decision that was made.

“It would have been better, for perception sake, if I had stepped away,” he said. He claimed that he didn’t recuse himself from the final decision because he wanted to get the funds through to students as quickly as possible.

Trudeau testified that he did not know that WE had been involved in the program and that, even when it was decided to grant the charity the contract, he “actually pushed back on it.” He claimed he sent back the proposal for more scrutiny to ensure there was no perception of conflict of interest, like that the contract was given as an award to friends and supporters.

“We knew that the selection of WE charity would be closely scrutinized,” Trudeau said. “I deeply regret how this has unfolded.”

Angus pounced on this, questioning the prime minister’s judgement on proceeding with an organization that had paid out hundreds of thousands of dollars to his family members. He asked Trudeau how well he knew the Kielburgers and whether he pushed them to employ his mother as a speaker.

“I have seen them at events but not outside events,” said Trudeau. “I’m not friends with the Kielburgers. I know them. But we don’t have close ties.”

He added that he “never directly or indirectly encouraged [his mother] to work for WE or any other organization.”

Trudeau  also claimed to Bloc Québécois MP Rhéal Fortin that he was not aware that Finance Minister Bill Morneau received travel expenses for a trip he had taken recently on WE’s behalf. Morneau has apologized and says he wished he had recused himself from the decision. And he has promised to pay back the $41,000 to the organization.

The real battle, however, took place been Conservative MP Pierre Poilievre, the committee’s vice chair, who hammered away at the prime minister for poor judgement in not removing himself from the decision from the very beginning.

Poilievre also accused Trudeau of “throwing the public service under the bus”, making them a convenient scapegoat for a decision that was actually championed by the PMO. And he repeatedly pushed Trudeau to reveal how much money his family members received from the charity. Trudeau dodged this question, saying he new they had been reimbursed for their travel expenses but he didn’t know how much.

And he managed to convey the fact that he originally tried to hold up the contract to ensure there were no problems with it. That’s something the public didn’t know before today.

In doing so, he managed to survive the exercise without too much political damage. However, the Trudeau brand took yet another very public beating today, which was the unwritten goal of all the opposition parties. The prime minister did not seem entirely forthcoming in his answers and he seemed all too willing to scapegoat the bureaucracy.

The original controversy is now revolving around the questions of whether the prime minister showed poor judgement in this entire affair and whether this poor judgement constitutes a conflict of interest. Unfortunately for Trudeau, the whole incident serves to confirm the perceptions that he’s a serial ethics violator and that he’s willfully  oblivious to the law.

“You give the impression that the laws that define what politicians can or cannot do does not apply to you,” Angus said.

Ethics commissioner Mario Dion will decide whether Trudeau violated ethical guidelines as he conducts his probe in the affair. The opposition trumpeted the fact that this is the third official probe into Trudeau’s ethics. (The first was accepting a paid vacation and the second for his involvement in the SNC Lavalin affair.)

Conservative leader Andrew Scheer thinks that Trudeau is not only guilty of conflict of interest but that his actions should be subject to a criminal investigation.

“Handing a $900,000,000 contract to a charity that has been paying your family for years is not a mistake. It’s far more serious,” tweeted Scheer.

And NDP leader Jagmeet Singh suggested whole affair shows that the Liberals were once again caught awarding their friends.

“As the evidence mounts it’s becoming clearer and clearer … that the liberal government has been working behind closed doors to get millions of dollars into the pockets of their close friends,” Singh tweeted.

Following Trudeau’s testimony, his chief of staff Katie Telford took the stand to help support the prime minister’s version of the events.

Prime Minister Trudeau Apologizes For Not Recusing Himself in WE Affair