Trudeau: As We “Double Down” Efforts to Fight Second Wave, Provinces Must Focus on Long-Term Care 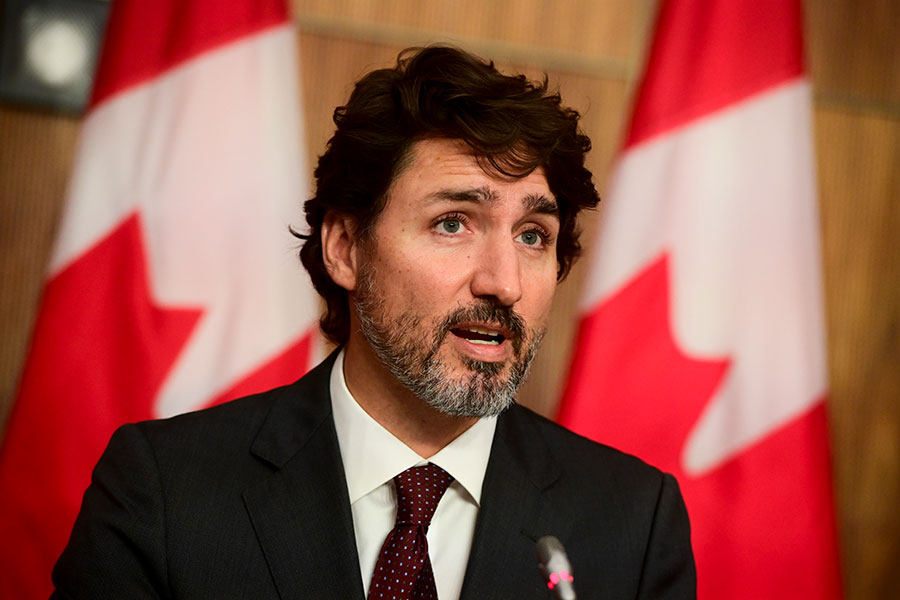 Prime Minister Justin Trudeau takes part in a press conference during the COVID pandemic in Ottawa on Oct. 13. THE CANADIAN PRESS/Sean Kilpatrick

Prime Minister Justin Trudeau said in a news conference today that Canadians must “double down” on efforts to contain the second wave of COVID-19 that is causing a surge in new cases across the country.

“The numbers are still rising. This is the time to double down on efforts to stop the spread,” he continued. “Canadians are more united than ever.”

With the predicted resurgence of COVID-19 now upon us, especially in provinces like Ontario and Quebec where public health authorities are instituting a new round of business lockdowns to contain the spread, the mood in the country after the Thanksgiving long weekend seems just as downcast as it was last spring when the pandemic first hit.

Noting that all Canadians long “just to have life return to normal,” the prime minister announced that the government had more than 28 million rapid tests going  “out to the front lines as soon as possible.” He noted that arming provinces with “quick and reliable” rapid tests  will help “control the spread of the virus and keep people safe.”

Trudeau also outlined efforts to ensure that this second wave of COVID-19 is not as deadly in long-term care homes as it was the first time around. To make sure our most vulnerable citizens remain safe, the prime minister announced that the government will deploy Red Cross workers to parts of the country where nursing home outbreaks have already started.

And he called on provincial leaders to focus efforts on those most vulnerable to the deadly effects of COVID-19.

“All seniors need to be protected throughout the country,” he said. “And we need to work together to offer quality care for all seniors,” telling reporters that he will discuss the issue of preparing long-term care facilities for the second wave with the provinces.

Adding that all dependent seniors should receive the same level of care regardless of where they live, he suggested that it was time to establish “norms for long-term care across the country.”

With regards to support for individuals and businesses hit hard by the pandemic, Trudeau noted that the new Canada Recovery Benefit is available to people whose jobs have been affected by the economic crisis. The CRB will replace the CERB and offers $500 a week for 26 weeks for qualifying applicants.

Pointing out that the “crisis has been very difficult” on business owners, Trudeau said the the government is taking steps to help them through a new round of lockdowns, such as extending the wage subsidy, expanding the business loans program, improving the rent subsidy program so more businesses qualify and extending credit to businesses that have “temporarily shut down because of local health authority lockdowns.”

Intergovernmental Affairs Minister Dominic LeBlanc said these measures were important as they will allow local health authorities to put in place measures that are necessary to confront the second wave.

Chief Public Health Officer Dr. Tam explained that the local public health authorities were faced with making difficult decisions necessary to contain the spread of the second wave are disrupting life. Tam said that ultimately getting the virus under control again will depend on making “Hard choices between what we need to do and what we would like to do.”

Answering whether the government adequately prepared Canadians for this second wave, Tam said that while provincial and municipal leaders “tried their best” to confront the first wave of the virus, they must now focus efforts on finding a balance between allowing businesses and schools to open while at the same time putting effective measures in place to control the spread of the disease.

“Nobody has the precise playbook,” said Tam on the difficulty of striking the right balance. “But we need everyone to collaborate” on following public health measures.