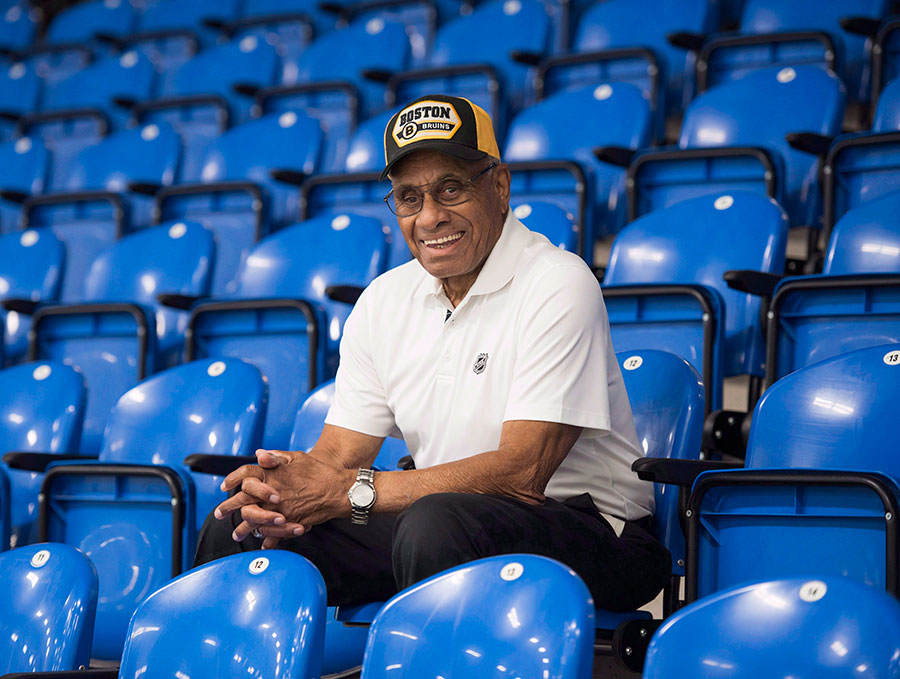 As Willie O'Ree, "hockey's Jackie Robinson," turns 85, his contributions to the game are finally being recognized. Photo: The Canadian Press/Stephen MacGillivray

When the riots against racism flared up last summer, in response to multiple cases of police brutality against Black men and women, Willie O’Ree, 85, was there to share his perspective on an issue with which he’s unfortunately all too familiar.

“It’s just a tragedy that every time an unarmed black man is killed,” said O’Ree, referring to the police killing of George Floyd in May.

“This dates back to the slavery age,” he continued. “It’s very discouraging to see what’s going on now.”

This never ending saga of societal racism must be doubly discouraging for a man who’s confronted — and overcome with great dignity and courage – the seemingly insurmountable barriers that society has always placed on those with a certain skin colour.

Growing up in Fredericton, N.B., through his junior days in Quebec and all the way to becoming the first Black hockey player ever to suit up for an NHL game, O’Ree faced racism every step of the way. And even as he gets on in years, he never turns down an opportunity to speak out.

The sport of hockey should consider itself darned lucky that Willie O’Ree is still able to travel around the world and share his epic story.

Back in 1958, when he smashed through hockey’s colour barrier, the NHL met his historical achievement with a giant shrug. Hockey’s Jackie Robinson was treated with little fanfare; he was just any other player struggling to make the pros.

Failing to recognize his accomplishment at the time was bad enough. But even after O’Ree retired, when the NHL was desperate to expand its reach and promote the game to minorities, it took a long time before anyone thought to rescue O’Ree from obscurity and finally recognize a player who changed the game forever.

To atone for its sin of omission, the NHL finally did the right thing and made O’Ree its spokesman for sport and race. Earlier this year, in his role as Ambassador for Black History month, this amazingly fit hockey great criss-crosses North America,  exposing the sport to young boys and girls from inner cities and diverse communities.

Many of the children he encounters in his travels have never been to an NHL game and aren’t familiar with Black hockey stars like P.K. Subban, Darnell Nurse, Evander Kane, Anthony Duclair, Seth Jones or Wayne Simmonds. Or that future stars like Quinton Byfield, who was picked second overall by the Los Angeles Kings in the 2020 draft — the highest a Black player has ever been selected.

O’Ree’s mission is to visit large inner-cities and small communities across North America to upend the notion that hockey is a game limited to white players and fans only.

His unofficial job, though, is much more complicated and daunting. As a man who faced the slings and arrows of prejudice every single day of his lengthy professional career, he’s the go-to guy whenever racism rears its ugly head in hockey.  When a storm broke out this year involving former Calgary Flames head coach Bill Peters’ racist tirade against Black hockey player Akim Aliu, there was O’Ree, drawing on his experience and calmly providing wisdom, perspective and advice.

What we never hear, though, are the countless times he’s contacted by young hockey players who have been called out for their skin colour. O’Ree makes an effort to call the family and talk to the child. His consoling words and energizing pep talk mean everything to these kids. Like no one else in hockey, he understands their hurt.

For his efforts on breaking hockey’s colour barrier, fighting racism and promoting the game, O’Ree is finally getting his just due.

He’s a Member of the Order of Canada. In 2018, he was voted into the Hockey Hall of Fame. He even became the cover boy on a new coin issued by the Royal Canadian Mint in February to honour him during Black History Month. Plus, he’s written a new book Willie: The Game-Changing Story of the NHL’s First Black Player, which hit bookshelves in Oct. 2020.

And if that’s not enough, he’s also the subject of the award-winning documentary Willie, which was released last year.

Laurence Mathieu-Léger is a Montreal-born New York-based documentary filmmaker who co-produced, directed and shot this captivating narrative that traces O’Ree’s path from his hometown of Fredricton, N.B., to the NHL, including his lengthy minor-league career and his journey to the Hockey Hall of Fame.

“I’d been living in New York for about 11 years, and my neighbour in Harlem was Bryant McBride, who had been the first Black executive in the NHL,” says Mathieu-Léger, describing how the film came about. “One day, Bryant randomly told me about this effort to get Willie into the Hall of Fame. I had no idea who Willie O’Ree was. I felt that I was probably not the only one.”

So she and McBride kicked around the idea of making a documentary that would explain the unrecognized hero who blazed a trail for future Black players into the NHL.

“I was in San Diego [where O’Ree now lives] for another shoot. Willie agreed to meet me for tacos at a Mexican joint,” recalls Mathieu-Léger. “I had a great time and, after that, all the doors opened. He felt like he could trust me, and I really wanted to honour his story.”

She and McBride decided that the documentary would follow O’Ree around for a year as he promoted the game to disadvantaged groups, met up with old friends in Fredericton and reminisced on what it was like to be a trailblazer for all the Black players who followed him into the NHL.

The resulting documentary is a gripping narrative of the trials and tribulations and the long overdue recognition of a man who skated into history.

In Willie, we meet a typical small-town Canadian boy whose dream, like so many others, was to play in the NHL. He spent all his time playing the game he loved, unaware that he was different from others in his predominately white hometown. “I was just another kid playing street hockey or ice hockey,” he recalls.

Willie is a movie about that unassuming kid who was thrust into a heroic role that he neither sought out nor coveted. He didn’t have the headline-grabbing charisma of Muhammad Ali, the burning intensity of Jim Brown or the aloof confidence of Lew Alcindor (later Kareem Abdul-Jabbar), Black athletes who used their fame in sports to further the American civil rights movement.

Instead, all he wanted to do was to play in the NHL. And when he finally got his chance in 1958 — suiting up for the Boston Bruins against the Montreal Canadiens — his one request was that fans and opposing players judge him for his ability on the ice and the person he was off it, and not by the colour of his skin.

Unfortunately, for the great-great-grandson of a slave who escaped to New Brunswick from the American South, trying to quietly make his mark in sports during the racially charged era of the 1950s and ’60s just wasn’t possible. The AP article that covered his first game underplayed his achievement in ludicrously blunt fashion: “Boston Bruins re-called Willie O’Ree, Negro left wing, from their Quebec City farm club.”

Not only did he make it to the NHL despite being blind in one eye — an astounding feat in itself — he had to face the acrimony of fans and players who didn’t want a Black player on the ice. “Every game that I played, there were racial remarks directed at me by players and fans,” he says in the documentary. His Boston teammates and coach Milt Schmidt accepted him with open arms, which is why, to this day, he remains a big Bruins fan.

But as N-words rained down from the stands or he was jeered at by opponents, he often thought of quitting the game. “But I told myself I’m not going to leave the game because of the racism and prejudice,” he recalls in the documentary.

While his NHL career was limited to 45 games (in the Original Six era, big league jobs were exceedingly hard to come by), he had a long and successful minor league career with the Los Angeles Blades and San Diego Gulls of the old Western Hockey League, playing until age 45.

When his career ended, he didn’t seek out fame or try to cash in on his achievement. While the press dubbed him “the Jackie Robinson of hockey,” he only wanted to be “the Willie O’Ree of hockey.” But that didn’t amount to much and, unlike Jackie, Willie needed to pay the bills. He did so by working in construction and managing fast-food restaurants before finally settling in the security business.

So when the hockey world forgot all about him and his overriding accomplishments, you could forgive him if he became cynical or resentful in his old age. But that side of O’Ree never emerges in the documentary. He simply isn’t built that way.

“Here was a man who broke the colour barrier and then ended up flipping burgers in fast-food joints,” says Mathieu-Léger. “And when he was finally approached in the ’90s to be an ambassador for the NHL, he wasn’t bitter about being forgotten.”

And when recognition finally came his way, not to mention his new role with the NHL, he took the same hard-working and dogged approach that helped him make it to the big leagues. Only this time, his exploits were honoured rather than ignored.

Throughout the documentary — whether he’s remembering his childhood, meeting with old friends or promoting the game to young players of colour — these characteristics of resilience, integrity, understanding and sincerity come through vividly.

He understands that racism still lingers in sports and especially in the NHL, a league that’s largely comprised of white Canadians, Americans or Europeans. “I knew that if I wanted to play pro hockey, I would have to work hard and be better than the white players,” says O’Ree, echoing a reality that exists even for today’s minority players.

And he never tires of spreading the message that hurtful words should not deter young Black girls and boys from enjoying the sport he continues to love.

“When I get the chance to talk to these kids, I just tell them names will never hurt you unless you let them. Just play hockey and don’t worry about anything else.”

A version of this article was originally published in February 2020.