As Kamala Harris Makes History as the New U.S. Vice-President, the Celebration Has Already Started on Social Media 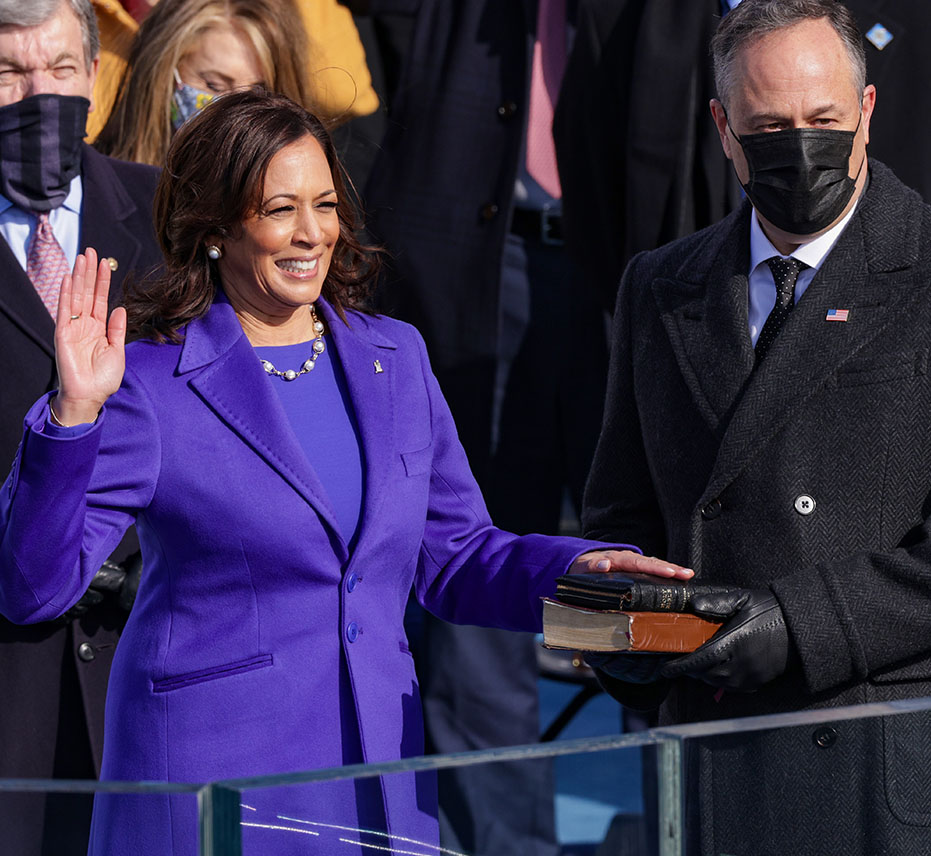 Kamala Harris has officially been sworn in as the first female, Black and South Asian person to hold the office of vice-president of the United States.

Harris arrived at the inauguration ceremony with her husband, Douglas Emhoff, who now becomes the first Second Gentleman in United States history.

On her way to her seat she exchanged a fist-bump with Barack Obama, America’s first Black president, during which he reportedly told her that he’s “so proud of you.”

For her swearing in, Harris chose Justice Sonia Sotomayor — the first Latina Supreme Court Justice in the United States — to conduct the oath of office. She also elected to use two Bibles — one that belonged to a beloved family friend and “second mother” named Regina Shelton and the other to Thurgood Marshall, the civil rights attorney who served as the country’s first African-American Supreme Court Justice, not to mention one of Harris’s personal heroes.

With Emhoff holding the Bibles, Harris took the oath to a round of applause at the U.S. Capitol. However, with both COVID-19 and security concerns — particularly in the wake of the Jan. 6 domestic terrorism attack on the Capitol — causing organizers to close the inauguration to the usual crowds of thousands who attend in person, millions took to social media to celebrate the historic moment.

And Harris’s official government Twitter account even tweeted shortly after she took the oath of office, offering the simple declaration: “Ready to serve.”

“I may be the first woman to hold this office. But I won’t be the last.”

Those are the words Kamala Harris spoke in her acceptance speech following the 2020 election, which cemented her as the first female, first Black person and first person of South Asian decent to become vice president of the United States.

In the speech, the 56-year-old reserved the highest praise for her mother, Shyamala Gopalan Harris — a biomedical scientist who arrived in the United States when she was 19 — whom she called “the woman most responsible for my presence here today.

“So I am thinking about her and the generations of women, Black women, Asian, white, Latina, Native American women who surround our nation — who throughout our nation’s history have paved the way for this moment tonight. Women who fought and sacrificed so much for equality and liberty and justice for all. Including the Black women who are too often overlooked, but so often prove they are the backbone of our democracy.”

It’s no surprise, then, that for her historic inauguration, Harris chose Justice Sonia Sotomayor — first Latina Supreme Court Justice in the United States — to swear her in. And Harris will be sworn in using two Bibles — one that belonged to a beloved family friend and “second mother” named Regina Shelton and the other to Thurgood Marshall, the civil rights attorney who served as the country’s first African-American Supreme Court Justice, not to mention one of Harris’ personal heroes.

“When I raise my right hand and take the oath of office tomorrow, I carry with me two heroes who’d speak up for the voiceless and help those in need: Justice Thurgood Marshall and Mrs. Shelton,” Harris tweeted on Tuesday.

Meanwhile, the weight of the historic moment has been resonating with people of all ages since the election results came in and declared the Biden-Harris ticket the winner.

On Tuesday, the Biden Inaugural Committee tweeted out a video of children who wrote letters to Harris to thank her for inspiring them and to wish her well as vice-president.

“I have been waiting for a girl vice-president forever. I’m so glad you are the first because now girls can do anything,” one young girl named Amelia Phillips declared in the video that you can watch below. An 11-year-old boy named Peyton told Harris that he’s sure Harris will make a great vice-president and “make the world a better place,” while a first grader named Sahana wrote to say, “I cannot believe that you are of Indian descent just like me” and sent Harris a drawing of her dog “to keep you company.”

The video pairs well with the clip of Harris tweeted out by The Women’s Organization the same afternoon, in which she discusses mentoring young people and telling them not to listen to detractors, concluding with, “I eat ‘no’ for breakfast.”

In addition, a number of high-profile Harris fans can’t contain their excitement about the future VP.

On Tuesday afternoon, Hillary Clinton, who nearly became America’s first female president in 2016, tweeted a photo of Harris laughing with a group of young people with the caption, “Let’s just sit with this for a moment and what it means. Tomorrow, Kamala Devi Harris will be the first woman sworn in as vice-president of the United States.” Sarah Cooper, a Jamaican-American comedian and author who gained prominence through her hilarious viral videos in which she lip-synchs Donald Trump interviews and speeches, replied to the tweet with, “Okay, now I’m crying.”

Meanwhile, Rashida Tlaib, a Michigan congresswoman who became the first woman of Palestinian descent in the U.S. Congress, as well as one of the first Muslim women in Congress, tweeted a GIF of Harris dancing with the words Madam Vice-President over it and the caption “24 hours.”

As well, Julian Castro, who served as President Barack Obama’s Secretary of Housing and Urban Development, tweeted a photo of Harris with the caption, “Throughout her career, @KamalaHarris has defied odds and broken barrier after barrier through hard work. Tomorrow she will ascend to the vice-presidency, and millions of young people—especially young women of color—will be inspired by her once again.”

And Lili Bosse, a philanthropist and former mayor of Beverly Hills, tweeted, “Tomorrow, history will be made as #KamalaHarris is sworn in as the 1st woman of color to hold the office of VP of the United States. No matter your party, this is a win for all, providing much needed representation for all to see at the top of our government.”

And though it happened back in November, following the Biden/Harris election win, actress and author Mindy Kaling, whose parents are from India, tweeted one of the most touching celebratory remarks about Harris when she wrote, “Crying and holding my daughter, ‘look baby, she looks like us.’”