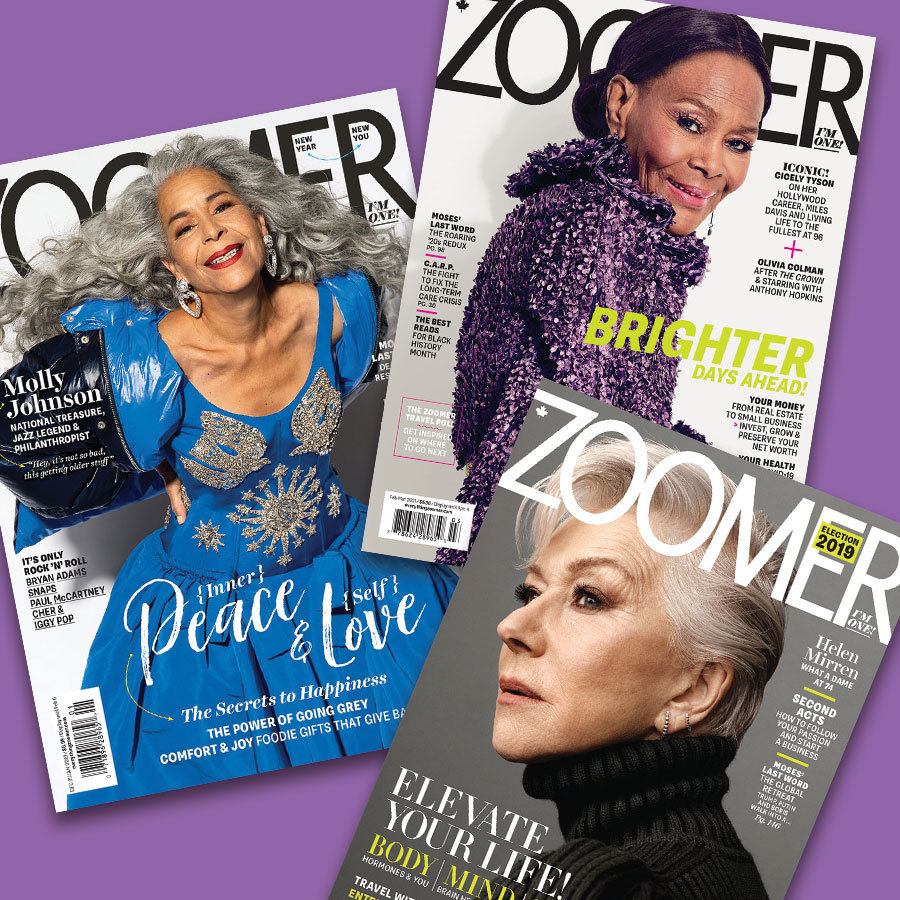 This International Women’s Day, organizers are asking us to #BreakTheBias — a campaign that challenges us to make a collective effort to root out gender bias, discrimination and stereotyping in our communities, workplaces and institutions.

Zoomer magazine has always taken this direction seriously. Over the years, the magazine’s covers have proudly featured women from across the globe — celebrities, performers, activists or politicians who have contributed to breaking the bias. Plus, they’ve reached the top by battling other societal scourges – including racism and, of course,  ageism.

Today, we salute these pioneers by presenting their covers and their stories.  Each with a quote to give you taste of the kind of hurdles they’ve faced on their way to the top.

“[The racism has come] from both sides — never white enough, never Black enough. I never got real traction in the music business until I started singing jazz, which was seemingly a more appropriate genre for a brown-skinned girl. That still pisses me off. But songwriting keeps me sane”  —Molly Johnson on overcoming racism in the Canadian music industry

“We don’t look anything like the characters in the book. But you know, for me personally I have long heard the call, and one of my biggest goals is that I want everyone to feel that they belong and are worth standing up for. That is one of the reasons why I am here, to carry forth that mission” —Oprah on being part of the cast of A Wrinkle in Time

“I always felt in a way the people who said, oh, I was famous because of my legs and things like that, I had feeling in a way that they were right. [But after that book,] I knew that I was completely qualified, and I could call myself a scientist”  —Jane Goodall on writing 1986’s The Chimpanzees of Gombe: Patterns of Behavior

“We didn’t really think about gender as much in those days. There was a job to be done, and whoever was there did it. We didn’t think it was so unusual because it was just there to be done”  —Betty White (1922-2022) on being one of the first women producers in television

“I think I became a better actor because of my activism, When you’re an activist and you’re trying to end a war or you’re trying to make things better for women and girls, you’re not going to spend a whole lot of time wearing a designer outfit. I spent 20 years not even wearing makeup and not looking so great, frankly”  —Jane Fonda on prioritizing activism over appearance early in her career

“That was the mentality back then. And that killed him”  —Hazel McCallion on winning her first of 12 Mississauga, Ont. mayoral elections in 1978, beating out incumbent Ron Searle who has said that he ignored his instincts to “hammer the hell out of her” because she was a woman

“How many people are there in history like Catherine the Great? Women who were complex, who were vulnerable, who were powerful, who were successful — inevitably, as an actor, you are going to be drawn to the idea of playing someone like that”  —Helen Mirren, 74 at the time, on playing a 33-year-old Catherine the Great for the HBO mini-series she also executive produced

“My father was a turban-wearing Sikh all of his life. My mom wore a bindi [a coloured dot on the forehead] every day of her life … and wore saris. They were very visibly different. But they were very proud of who they were. And the upside of that is that it made me confident in being different. It did not bother me. The downside is that we did get stereotyped a lot”  —Monica Deol on becoming a “virtual mentor” for South Asian Canadians as host of MuchMusic’s Electric Circus

“As an artist with the privilege of the spotlight, I felt an enormous responsibility to use that forum as a force for good, as a place from which to display the full spectrum of our humanity. I was determined to do all I could to alter the narrative about Black people — to change the way Black women in particular were perceived, by reflecting our dignity”  —Cicely Tyson (1924-2021) from her memoir, Just as I Am