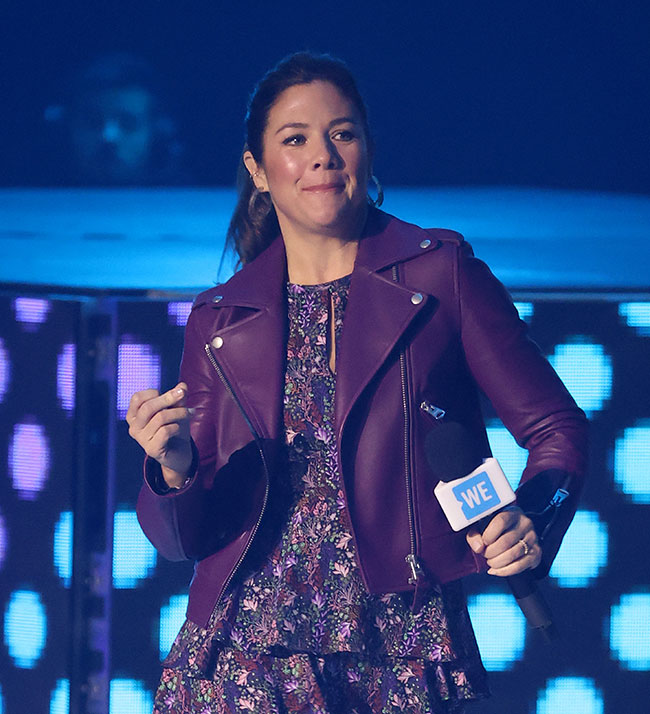 Sophie Grégoire Trudeau dances onto the stage at WE Day UK 2020 at Wembley Arena in London a week before testing positive for COVID-19. Photo: Mike Marsland/WireImage

The prime minister’s wife, Sophie Grégoire Trudeau, has been given the all-clear by doctors and Ottawa Public Health, which means she is no longer infected with the virus that causes COVID-19.

“I am feeling so much better,” the mom of three wrote in a Facebook post on Saturday evening, more than two weeks after the PMO confirmed she had a mild case of COVID-19, which she may have caught on a trip to England.

“From the bottom of my heart, I would like to thank everyone who sent me their best wishes. I send all my love and courage to the people who are suffering right now.”

Trudeau, 44, took the opportunity to remind Canadians that physical distancing measures are still necessary to flatten the curve and delay the peak of COVID-19, which had infected 6,320 Canadians as of Monday morning.

“I firmly believe that science AND compassion will help us get through this crisis,” she wrote. “To get there, you have to listen to and follow health protocols and stay home for the time being.”

Grégoire Trudeau was in self-isolation at their Ottawa home, Rideau Cottage, where the Prime Minister has been running the country by phone and computer, coming outside once a day for press briefings he gives from a podium set up on the driveway.

At his March 13 briefing, Trudeau said he had no symptoms but would stay home for 14 days as a precaution.

“I’m feeling good,” he told reporters. “And technology allows me to work from home. Of course, it’s an inconvenience and somewhat frustrating. We’re all social beings after all but we have to do this because we have to protect our neighbours and our friends, especially our more vulnerable seniors and people with pre-existing conditions.”

At the beginning of March, when Grégoire Trudeau took Ella-Grace, 9, and her mother-in-law Margaret Trudeau, 71, to England, the number of U.K. coronavirus cases was low at about 50.

By March 4, it was 160, and by the time the Prime Minister’s wife returned home about a week later, it had more than tripled to 590 confirmed cases and eight deaths. This morning, there were more than 1,200 deaths and 19, 821 cases in the U.K., and that includes Prime Minister Boris Johnson and Health Minister Matt Hancock, who announced positive tests on March 27, and  junior health minster Nadine Dorries on March 11.

Grégoire Trudeau looked the picture of health as she bounced on to the WE Day UK 2020 stage on March 4 in an above-the-knee, flower-print dress, purple moto jacket and a slicked-back pony tail at Wembley Arena in London.

The Guardian newspaper reported the WE well-being champion hugged singer Leona Lewis and kissed former Australian prime minister Julia Gillard, whom she joined for a discussion on empowering girls in front of an audience of about 13,000 young people.

In a statement, WE noted the Canadian prime minister’s wife had visited a number of places in London on her trip but, “out of an abundance of caution,” it was “reaching out to all individuals that had contact with her.” Staff were asked to work from home, and the youth organization decided to postpone its spring U.S. WE Day tour.

On March 16, Elba tweeted that he had tested positive for the novel coronavirus, after learning he was “exposed to someone who had also tested positive.” Although he didn’t name names, he did confirm in a 17-minute video posted to Twitter March 17  he was exposed to that person, whom he described as “also in the public eye,” on March 4, the day he met Grégoire Trudeau at the WE Day event.

Two days later, Hamilton and Prince Harry shook hands and hugged goodbye at one of Harry’s last official engagements as a working royal, at the opening a British car racing museum where they had their hands on the displays, and Harry chatted with schoolchildren. Since then, Prince Charles has tested positive for the novel coronavirus and is in self-isolation at his Scottish home on Balmoral Estate.

On March 8, Grégoire Trudeau went to an International Women’s Day event at Canada House in London, where she was photographed with Canadian High Commissioner Janice Charette, who tweeted thanks to her “surprise guests,” mentioning Grégoire Trudeau and the U.K. cast of Come From Away. This afternoon, Charette tweeted that they are reaching out to all who attended the event and, “as a cautionary measure,” she is self-isolating and working from home. “I am feeling great & will be back soon. Pls follow the advice of our medical professionals! Stay well!”

On March 9, Charette attended the Queen’s Commonwealth Service at Westminster Abbey, where Harry and Meghan joined the family for the last time as official royals before they begin their post-exit life in Canada.

Grégoire Trudeau also stopped by a charity photo exhibit at the OXO Tower, where Afghan photographer Farzana Parween Wahidy tweeted a picture with the PM’s wife.

The prime minister is just one of several world leaders who have been directly affected by the novel coronavirus, which first showed up in China at the end of December. In the U.K., Health Minister Nadine Dorries tested positive this week, days after she met Prime Minister Boris Johnson at an event at 10 Downing Street. French Culture Minister Frank Riester was notified he had COVID-19 on March 9, although he had not met with president Emmanuel Macron for several days by that time. And a communications secretary to Brazilian president Jair Bolsinaro tested positive just days after Bolsinaro posed for pictures shaking hands with U.S. President Donald Trump at a dinner held in his honour Saturday at Trump’s Mar-a-Lago resort in Florida.