Jennifer Lopez at 50: Her Super Bowl Halftime Show Was Inspiring For Mid-Life Women 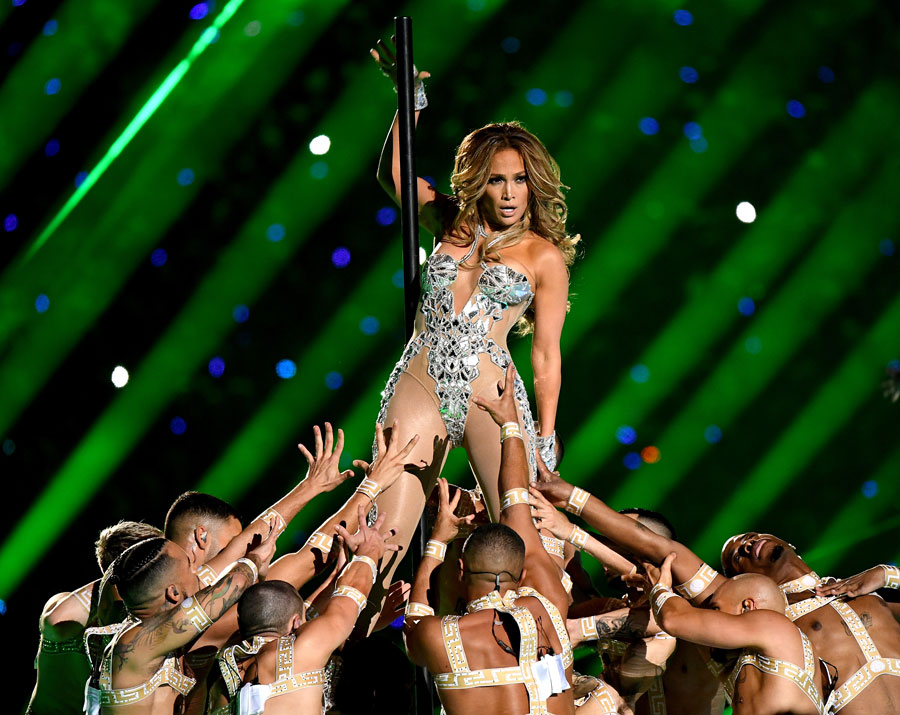 Watching Jennifer Lopez, 50, perform at the Super Bowl halftime show on Feb. 2 was like watching an Olympic athlete, and provides hope and inspiration for all women who want to keep fit and stay active. Photo: Kevin Mazur/WireImage

Now that the Super Bowl and its half-time show are behind us, let’s take a few minutes to reflect upon what the amazing performances by Jennifer Lopez and Shakira mean for women in mid-life.

Are J.Lo and Shakira, ages 50 and 43 respectively, an inspiration for women, or do they raise the bar so high that regular, middle-aged women feel like they should just throw in the towel and give up?

While the world focused on their looks and on whether their performances objectified women and were “too sexy” for prime time, I think the more interesting and inspirational issues lie elsewhere.

I mean, yes, both women looked beautiful but they’re also professional performers with a whole team devoted to costume, hair and makeup, and even with that team, it took them 10 hours to get ready.

And their looks are part of why they’re so successful in the first place. It shouldn’t be a surprise that both women looked phenomenal.

On the objectification front, the women authored their own show, including choosing the costumes. And it’s not like the cheerleaders were wearing bathrobes. Is it possible there’s just a touch of racism in these criticisms?

The New York Times had this to say about J.Lo’s physical condition: “Well, on Sunday Ms. Lopez showed the world what 50 looks like — at least her version of it.”

But it’s not just about looks. I think we can all distinguish between people who earn their living looking like J.Lo and Shakira and those of us with other careers that don’t involve performing in front of millions of people.

Instead, as a longtime scholar on feminism, I think what’s truly interesting is that J.Lo and Shakira are part of a trend of super-fit women maintaining and continuing their physical fitness regimens into mid-life and beyond.

The possibilities for what we can do in our 40s, 50s and 60s have changed. That’s inspirational and sends a positive message to women that is not about looks at all, but strength and resilience.

There was a time when it was assumed that after 40, it was physically all downhill for women — after all, the childbearing years are largely a thing of the past. But that’s just not true.

A friend of mine recently shared photos of her aunts from her youth, and in their 40s and 50s, they were dressed like church-going grandmas, complete with pearls and hats. These days, women at that age might be wearing running tights and matching race-cut singlets.

Older women, in fact, are taking over the running community and are, as a group, the fastest-growing race demographic. Women in their 40s are also running faster marathon times than 20-somethings, according to the running app Strava.

When my colleague Tracy Isaacs and I wrote our book Fit at Midlife: A Feminist Fitness Journey, we kept coming across stories of women athletes making serious inroads into competition in their 40s.

Kristin Armstrong, for example, didn’t start riding bikes competitively until she was 27 and landed some of her Olympic golds at 43. She’s the most decorated U.S. women’s cyclist of all time and the best time trialist in sports history. She is a three-time Olympic gold medallist, two-time World Champion and has won six U.S. National Championships.

And then there’s Canada’s Lori-Ann Muenzer, who entered the 2004 Olympics at the age of 38 and won gold on the track.

At the older end, there are many impressive senior citizens, including 89-year-old triathlete Sister Madonna Buder, nicknamed the Iron Nun.

Buder has competed in more than 340 triathlons and 45 full Ironmans, which require swimming almost four kilometres, biking 180 kilometres and running more than 42 kilometres.

If lifting is more your thing than endurance sports, you can look to Ernestine Shepherd for inspiration. She’s an American bodybuilder who is best known for being, at one point, the oldest competitive female bodybuilder in the world.

At 83, Shepherd no longer competes but she’s still out there training every day.

There’s also Olga Kotelko, a Canadian track and field athlete. Kotelko held more than 30 world records and won more than 750 gold medals in her 90-95 age category for the Masters competition.

But back to Jennifer Lopez and Shakira.

These women are performers with a wealth of creativity and they put on an amazing show. They’re also dancers and athletes, and we can admire what they can do without getting hung up about what they look like and what they’re wearing.

When I watched J.Lo slide across the stage and jump back up again and keep dancing, it was like watching Olympic athletes perform at their peak during competition. That J.Lo can still perform at that level at 50 provides hope for all us who want to keep on doing our best — in mid-life and beyond.

These excellent performers shouldn’t cause women to throw up their hands and stop working out any more than Olympic cyclists should inspire us to quit riding our bikes.

Personally, I’m impressed by J.Lo’s workout routine and I’m hoping both she and Shakira keep performing for a long time yet.

She Makes Aging Fun: Jennifer Lopez Blows Up the Entire Notion of What Women Are at 50

Older and Bolder: The Best-Dressed Stars on the Oscars Red Carpet