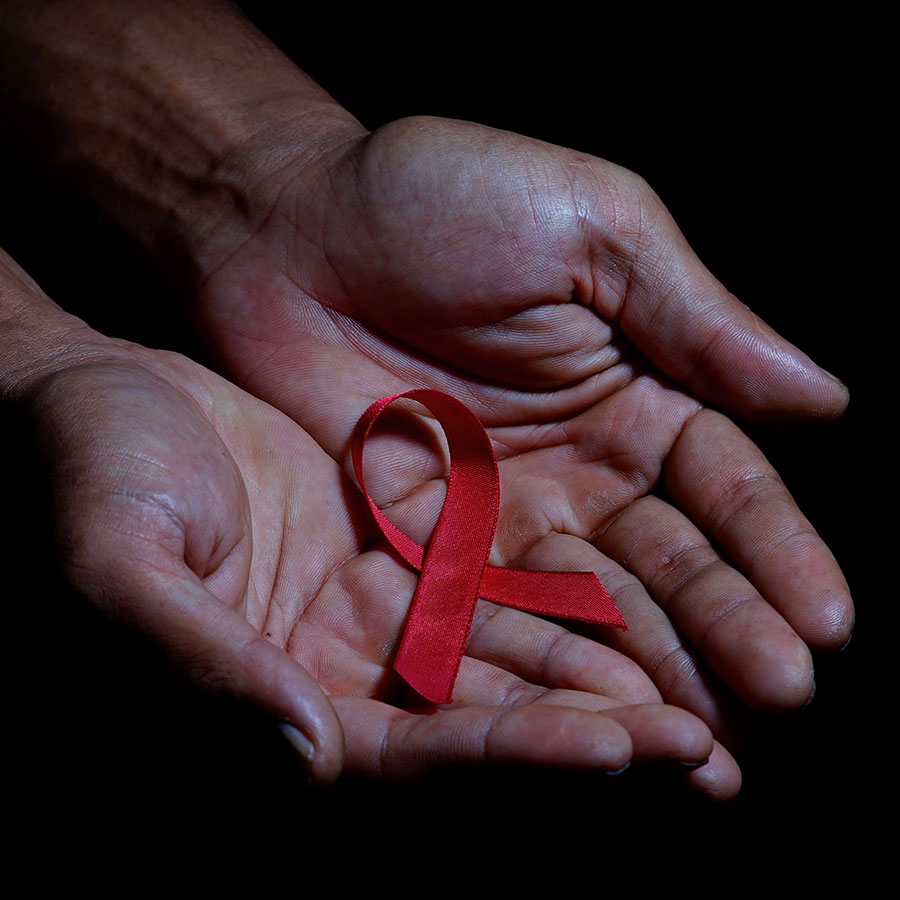 The Canadian Association for AIDS Research (CANFAR) — which uses the red ribbon (above), the international symbol of HIV/AIDS awareness, in their logo — are celebrating their 25th flagship fundraiser Bloor Street Entertains in Toronto on Thursday. Photo: iStock / Getty Images

With COVID dominating the health news, it’s easy to forget that, only a few decades ago, there was another novel viral infection that spread easily, killed quickly, had no cure and became a worldwide epidemic. Trevor Stratton has not forgotten.

The 56-year old HIV/AIDS activist, who identifies as two spirit — with a mother of Ojibwe heritage and a father of English heritage — was infected with HIV in 1990 when he was 25. He was diagnosed with AIDS a few years later.

He recalls the late 1980s as “a terrifying time for the gay community.” As a bisexual man living close to Toronto’s gay village, he says, “I’d see friends in bars and six months later those guys would be dead.”

Forty years after AIDS was first detected, that’s no longer the case.

The fact that Stratton and others diagnosed decades ago with the disease are living full, normal lives into their 50s and 60s and beyond is the result of scientific achievement and determined activism — both of which have been robustly supported for 35 years by CANFAR, the Canadian Association for AIDS Research.

“It started out with catering companies, people in the service industry and the retail industry coming together to create an event, with boutiques and galleries along Bloor, Yorkville and Cumberland all hosting dinners,” explains Alex Filiatrault, chief executive officer of CANFAR.

In 25 years, it has not only grown into a premier event for the Toronto glitterati, but it’s also Canada’s largest fundraising gala and after party in support of Canadian HIV and AIDS research. (Supporters can bid on silent auction items ahead of the event, and donate to the organization, here)

And this year, the swag bag for guests, stuffed with donated luxury goodies, will contain something unexpected: a take-home, do-it-yourself HIV test kit.

Promoting and helping to fund self-test kits developed and distributed by the I’m Ready research program is a major new initiative for CANFAR. It complements another new CANFAR initiative called Sexfluent — a safe and welcoming online community for young people “who are unapologetically curious about exploring their sexuality.”

“Doctors will tell you that people over 55 are still contracting HIV,” says Filiatrault, “and many are not even aware of transmission. It’s important for people over 55 who are active sexually to be aware of the different tools available to them.”

The combination of an aging population that continues to be sexually active and longer lives for people diagnosed with HIV decades ago means the prevalence of the disease is still a concern.

“Canada is the worst performing of the G7 countries in reducing the amount of HIV,” notes Gary Lacasse, 60 and executive director of the Canadian Aids Society.

“It’s no longer a death sentence,” he adds, “but there’s a gap between the general aging population and people living with HIV because of the medications they’re using. There’s a real incremental increase of comorbidities that come with aging with HIV: opportunistic cancers, bone density, renal, cardiovascular.”

He adds, “I didn’t know that [someone’s] heart would be affected as [they] get older because of the medications [they’re] taking for HIV.”

Along with the prevalence of HIV, there remains some of the stigma — especially outside of urban areas.

“There is still shame and fear associated with HIV in more isolated and marginalized populations,” says CANFAR’s Filiatrault, “and that comes from lack of awareness and education. Sometimes that stigma interferes with people getting to know their status and accessing care as soon as possible to have a healthy, long life.”

They agree that “one of the things that hasn’t necessarily changed is the stigma. People still have the 1980s in mind.”

But, they acknowledge that when they was first diagnosed, they had to learn “to let go of my own internalized stigma.”

There’s not enough awareness, they say, of “undetectable equals untransmittable” or “U=U” — the finding that someone with a viral load of HIV that is undetectable on testing cannot transmit the disease.

“There are still barriers to getting that information out,” they add.

According to Health Canada surveys, an undetectable viral load is reported by “63 per cent of people who inject drugs and up to 96.7 per cent by gay, bisexual and other men who have sex with men.”

For Sexton, Stratton, Lacasse and more than 60,000 Canadians living with HIV, the research and science that developed antiretroviral drugs and the support of activist and fundraising organizations like CANFAR have been more than life-sustaining. They’ve been a blessing.

“It’s why I get to live today,” says Sexton, “We need to share these stories of people I consider my elders, people in their 50s living very normal lives, these stories of hope and resilience.”

Click here to learn more about Bloor Street Entertains and bid in the event’s silent auction.