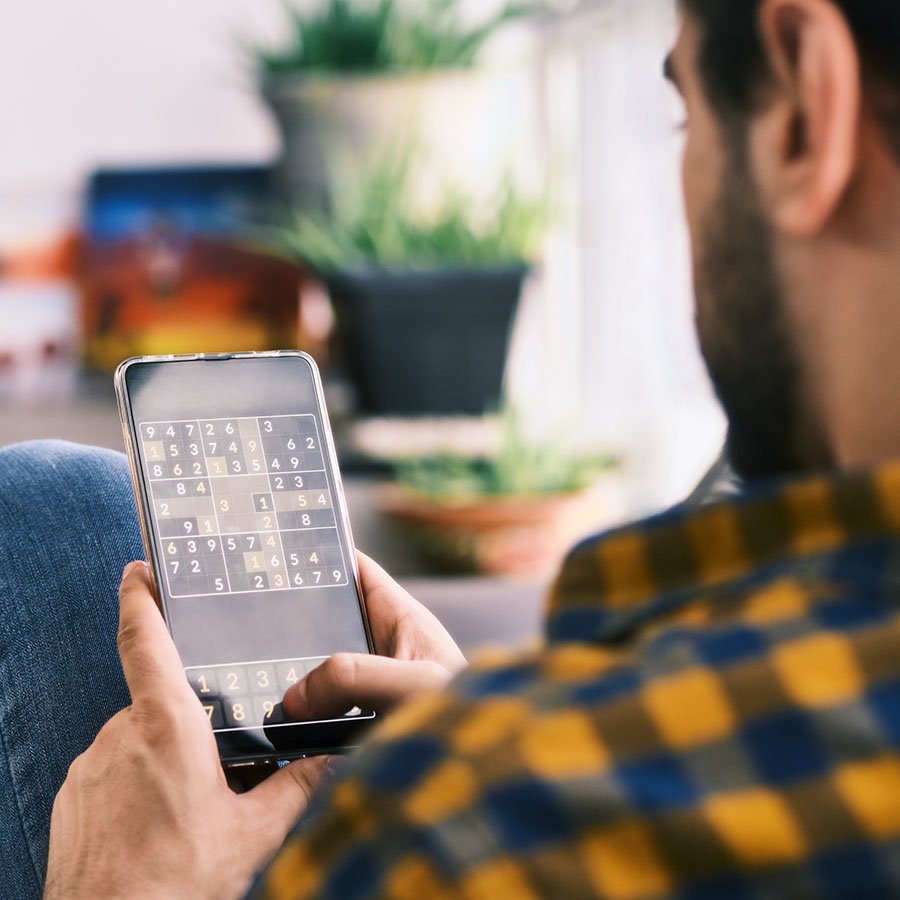 Tap into the cognitive benefits of gaming with our roundup of puzzle games available on your phone and tablet. Photo: diego_cervo /Getty Images

Studies have shown there are cognitive benefits to playing puzzle and word games. For example, researchers at University of Montreal found playing 3-D platforming games could stave off mild cognitive impairment and perhaps even prevent Alzheimer’s for those between age 55 and 75.

Considering January is Alzheimer’s Awareness Month, let’s take a look at a handful of recommended (and vastly different) puzzle games for your smartphone or tablet – all of which are free to start but with optional in-app purchases.

If you like games like crossword puzzles, word searches, picture cross, and sudoku, one freebie called Puzzle Page has it all in one place. As the name suggests, it’s similar to a page of games in a newspaper, with a variety of games to play that day, and you get a fresh batch the following day. But at any time you can go back in the in-game calendar and play a previous day’s collection of digital diversions. Appy Nation’s suite of puzzles games are largely based on number, word and picture games, plus there are daily challenges, unlockable “achievement” trophies, and rewards.

If you like those “hidden object” games – where you’re tasked to find well-hidden items in a crowded scene – Wooga’s June’s Journey is loaded with hundreds of these puzzles. The multi-chapter mystery set in the roaring 1920s in locations like New York and Paris, as you follow June Parker on her dangerous quest to unveil a family secret. Along with sleuthing, the game also offers attractive graphics, memorable characters, the ability to customize your very own luxurious mansion and garden island, and access to other players through an optional social media feature. Like a TV show, this game offers a new chapter to solve every week.

As one of the most popular game downloads, Loop Games’ Match 3D is the classic matching game, but instead of turning around cards to find a matching pair, you’re sifting through several three-dimensional objects and you’ve got a limited amount of time to match all the items. For example, you’ll need to use your fingertip to dig through a pile to find a matching wedding ring, wagon, basketball, rocket and hundreds of other items. While there are exceptions, the more you progress, the less time you get, and the more items are thrown in for you to find before the clock runs out. The game is fun, challenging and attractive.

Brain Out (here for iOS and here for Android) is a clever collection of mostly logic puzzles, as well as those that test your memory, creativity, accuracy and in some cases, reflexes. You’ll be presented with a scene, and asked a question, which you must answer correctly by manipulating something in the image. For example, you’ll see an owl in a tree and will be asked to wake it up. The solution is dragging the sun out of the scene so that it becomes nighttime, and thus allowing the nocturnal animal to awake. In another level, you’re asked “Which bucket has fish?” and you must turn your phone upside down and you’ll see which one has a fish that falls out. You get the idea.

The most popular digital version of Solitaire – played by tens of millions of Windows users – is also a top pick on iOS and Android. A free download for phones and tablets, Microsoft Solitaire Collection (iOS version is here and Android is here), features five of the most popular solo games: Klondike, Spider, FreeCell, TriPeaks and Pyramid. Most of these games have rules you can tweak, plus you can partake in events with other players, finish daily challenges, earn experience points (XP) and collect virtual bracelets. Visually, this game includes many themes and card backs to choose from, plus you can create custom card backs from your own photos. And yes, the end-game card animations have been carried over from the PC version.

If you haven’t yet played a “merge” game, these puzzlers challenge you to drag similar items into one another in order to make something new, such as three twigs that turn into a branch, while three branches turn into a log, and three logs turn into small cabin and so on. Easy to pick up but difficult to put down, Big Fish Games’ EverMerge takes this popular concept and adds some classic fairy tale characters into the mix, great graphics and plenty of humour. Almost everything in this world can be merged as you expand the world of EverMerge, plus the game makers include castle building for even more depth, as well as engaging side-missions, weekly challenges and special events.