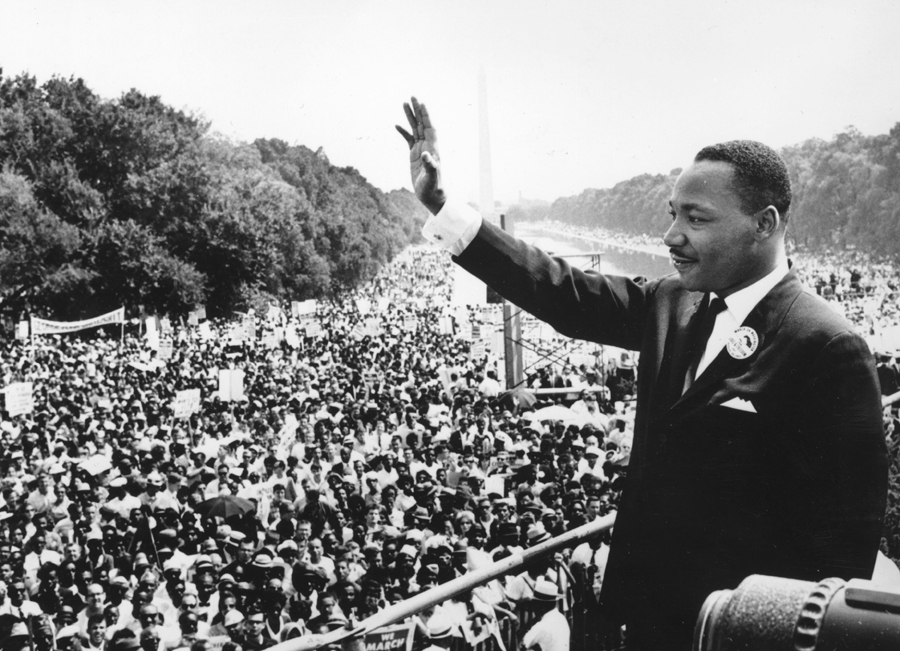 This week (Saturday, April 4) marks the 52nd anniversary of the assassination of civil rights leader, Martin Luther King, Jr. Here we look back at his extraordinary life and legacy.

Note: A version of this article was originally published in 2018 on the 50th anniversary of Martin Luther King Jr.’s death.

“I’m delighted to see each of you here tonight in spite of a storm warning,” Martin Luther King Jr. said, greeting audience members at the Mason Temple in Memphis, Tennessee, on April 3, 1968. “You reveal that you are determined to go on anyhow.”

Contending with a cold that almost forced him to cancel the engagement – not to mention the spectre of the bomb threat that interrupted his travel to Memphis in the first place – King proceeded with his now legendary “I’ve Been to the Mountaintop” speech.

The speech, of course, became famous both because of King’s brilliant oration and declarations about race and equality in America – specifically in defence of striking local sanitation workers – and for the fact that within 24 hours of delivering it he was dead.

In the five decades since his assassination, many have pointed to the almost prophetic words he utilized that night in discussing his own demise. “Like anybody, I would like to live a long life,” he declared. “Longevity has its place. But I’m not concerned about that now. I just want to do God’s will. And He’s allowed me to go up to the mountain. And I’ve looked over. And I’ve seen the Promised Land. I may not get there with you. But I want you to know tonight that we, as a people, will get to the promised land!”

Just as prescient, however, are the words he spoke at the beginning of the night – the talk of a storm and the determination of the people to continue on regardless. King and his followers couldn’t have known the severity of the squall to come, triggered by one shot from an assassin’s Remington Model 760 Gamemaster rifle or that the determination of those devoted to the civil rights cause ran so deep that exactly 40 years later it helped land the first African-American President of the United States in the Oval Office.

None of this was evident on that night in Memphis. The only thoughts on the minds of those in attendance were King’s own words: “I’m happy, tonight. I’m not worried about anything. I’m not fearing any man! Mine eyes have seen the glory of the coming of the Lord!!”

It’s difficult, through 2020 eyes, to envision a time that King wasn’t popular. But in the 1960s not only was King a divisive character, he was downright disliked. As the New York Times noted, “nearly a half-century ago, when he was assassinated, public perception of him was far more mixed. Near the end of his life, only a third of the public viewed him positively, according to a 1966 Gallup poll.”

And yet today, in death, King receives the widespread adoration that neither he nor his message enjoyed in life – a benefit of both hindsight, an expanding of tolerance and, perhaps, absence making the collective heart grow fonder. His birthday is a national holiday while his framed image enjoys almost saintly status, hung prominently in positions on walls across America usually reserved for Old Glory and crucifixes. A towering granite statue bearing his likeness – the Stone of Hope – keeps watch near the National Mall in Washington, D.C., within sight of the Lincoln Memorial. His personal failings are wiped clean and his image near spotless. As Patrick Parr noted in The Boston Globe, “In the words of his Crozer Theological Seminary professor and friend Kenneth Smith, ‘We have frozen Martin’s feet to the steps of the Lincoln Memorial in 1963,’ failing to realize the overall complexity of King and his message to the American people.”

The shift in attitude toward King illustrates how dramatically America itself has changed in the 50 years since he was gunned down on the balcony of the Lorraine Motel outside room 306. The name “Black Panther,” once a symbol of armed street patrols, now embodies a big screen superhero; civil rights movements mobilize as much on social media as in the public square; African-Americans shed segregated lunch counters and schoolhouses to hold almost every top political office and appointment in the nation; groundbreaking cinematic achievements like Get Out collect critical laurels while openly challenging lingering racist attitudes; and the nation is so stirred by the passion of cultural figures like Oprah Winfrey that it crowns her president-in-waiting whether her sights will one day be set on the Oval Office or not. Yes, from the White House to Wakanda, people of colour in America shattered barriers that seemed all but impenetrable five decades ago. Of course, you know what they say about the more things change…

“1968, a leap year, brought the Tet Offensive, the assassination of Martin Luther King, Jr., the student protests at Columbia University, the assassination of Robert F. Kennedy, the bedlam of the Chicago Democratic Convention, the Black Power salutes at the Olympics, the emergence of George Wallace as an avatar of white-resentment politics, and the triumph of Richard Nixon’s southern strategy,” Jelani Cobb wrote in The New Yorker while reflecting on the year of King’s death. “That’s a great deal of history, even adjusting for the extra day in February.”

Fifty-two years on and the nation King sought to lift toward the mountaintop remains mired in turmoil near base camp. Nixon’s southern strategy, which harnessed racism to build support among white voters in the American South, gave way to President Donald Trump’s pandering to the racist far right political class – his most fervent political base. Now, ex-Attorney General Jeff Sessions – who boasted a shaky record on race and equality himself and whose nomination for a federal judge seat in 1986 was protested by King’s widow, Coretta Scott King, on grounds of racism – evoked memories of George Wallace’s schoolhouse stand while the fight for increased media visibility for people of colour in front and behind the camera serves as almost a pop culture nod to the Black Power Olympic salutes, a symbolic gesture to declare that “We’re here, and we aren’t going anywhere.”

“Racism is as much a driving force in our politics, culture and society as it was on the day of King’s assassination,” lamented an opinion piece in USA Today. “In 2017, more black people died at the hands of the police than the number of black people who were lynched in the worst year of Jim Crow.”

And in 2018, the Chicago Tribune added, “Today’s black poverty rate of 22 per cent is almost three times that of whites. Compared with the 1968 rate of 32 per cent, there’s not been a huge improvement. Financial security, too, still differs dramatically by race. Black households earn $57.30 for every $100 in income earned by white families. And for every $100 in white family wealth, black families hold just $5.04.”

And, as Cobb pointed out in his New Yorker piece, “The shooting death of the nation’s foremost proponent of nonviolence helped spur Congress to pass the Gun Control Act of 1968 … It is either damning irony or inspiring continuity—or, possibly, both—that the fiftieth anniversary of King’s death fell amid the largest antigun-violence mobilization that we had seen since he departed.”

Therein lies the complication of celebrating the life and legacy of Martin Luther King Jr. Is it possible to publicly revere the man and his work while failing to fully follow through on the ideals of peace, equality and non-violence that he gave his life for?

Perhaps the one true way to measure the impact of King’s legacy isn’t through how many of his goals for racial and social equality have been realized but by how the hope he instilled in countless people across generations has propelled progressive society forward in the years since his passing.

“For gay and lesbian (and now trans) Americans, Dr. King showed the power of love, moral witness and persistence to activate the country’s conscience and move seemingly intractable obstacles,” Jonathan Rauch, a Governance Studies Senior Fellow at the Brookings Institute, wrote. “Though the fight for (e.g.) same-sex marriage followed a very different trajectory than Dr. King’s battle, our battle relied from beginning to end on the example and hope he gave.”

And civil rights leader and congressman John Lewis, who worked and marched alongside King, illustrated the power of the ideals King held when speaking to students about an incident of reconciliation with a member of the KKK, who asked his forgiveness decades after bludgeoning up. “That’s the power of the way of peace and love. You respect the dignity and the worth of every human being.”

President Barack Obama added in the same discussion that, “If you are speaking on behalf of social justice, then by definition there’s going to be some controversy because if it wasn’t controversial, then somebody would have already fixed it. Dr. King was controversial, but he studied and thought and crafted what he had to say. He knew, when he spoke, he was expressing a truth as well as he could know it.”

It’s an attitude that informs and inspires everything from Parkland students protesting gun violence to the continued fights for racial and social equality that divide America today.

Meanwhile, the pain of King’s death is still felt by those who were aware of it in 1968, include those who witnessed it first hand. Mary Ellen Ford told TODAY about how, as a 21-year-old cook at the Lorraine Motel, she ran outside with colleagues when she heard the shot that killed King and saw his prone body on the balcony above. “At first I thought it was firecrackers … I’m just dumbfounded. Shocked … This don’t happen here. This is not okay.” She kept her presence at the scene of the shooting secret from friends and loved ones until recently because the pain of the event was too great. As did Rhonda James, who was eight years old when she accompanied her father, saxophonist Ben Branch, and her older brother to the Lorraine Motel to visit Dr. King ahead of her dad’s performance of “Take My Hand, Precious Lord” at a rally later that day. She and her brother waited in the back seat of the car, parked just below the balcony, as her father went in to talk with King. When her dad returned to the car, she recalls King emerging on the balcony.

“Dr. King hollered down to my father,” James told WMC Action News 5. “He said, ‘Ben … I want you to play ‘Precious Lord’ like you’ve never played it before. Play it real pretty.’”

Then a single gunshot shattered everything.

Today, publications around the world, including the New York Times, offer first-hand reminiscences of King’s assassination and sprawling archival coverage of the tragedy, its aftermath and what it means for American society.  This year, in light of the COVID-19 pandemic, the National Civil Rights Museum, located at the Lorraine Motel where King was assassinated, will hold a virtual commemoration of his death, titled “Remembering MLK: The Man. The Movement. The Moment.”

But 52 years ago, Martin Luther King Jr. spoke of the mountaintop, the glory beyond and his confidence that America will reach the promised land. His words, like his life and actions, continue to inspire purpose and progressiveness around the world. His legacy remains so far above that the rest of us still haven’t quite figured out how to propel ourselves to the summit alongside him.

Yes, King has been to the mountaintop. And he told the rest of us we’d get there too. What he never promised is that it’d be an easy climb.

In 1963 Martin Luther King Jr. Gave His Iconic “I Have a Dream” Speech – Why It’s More Relevant Than Ever

Martin Luther King: “I’ve Been to the Mountaintop”