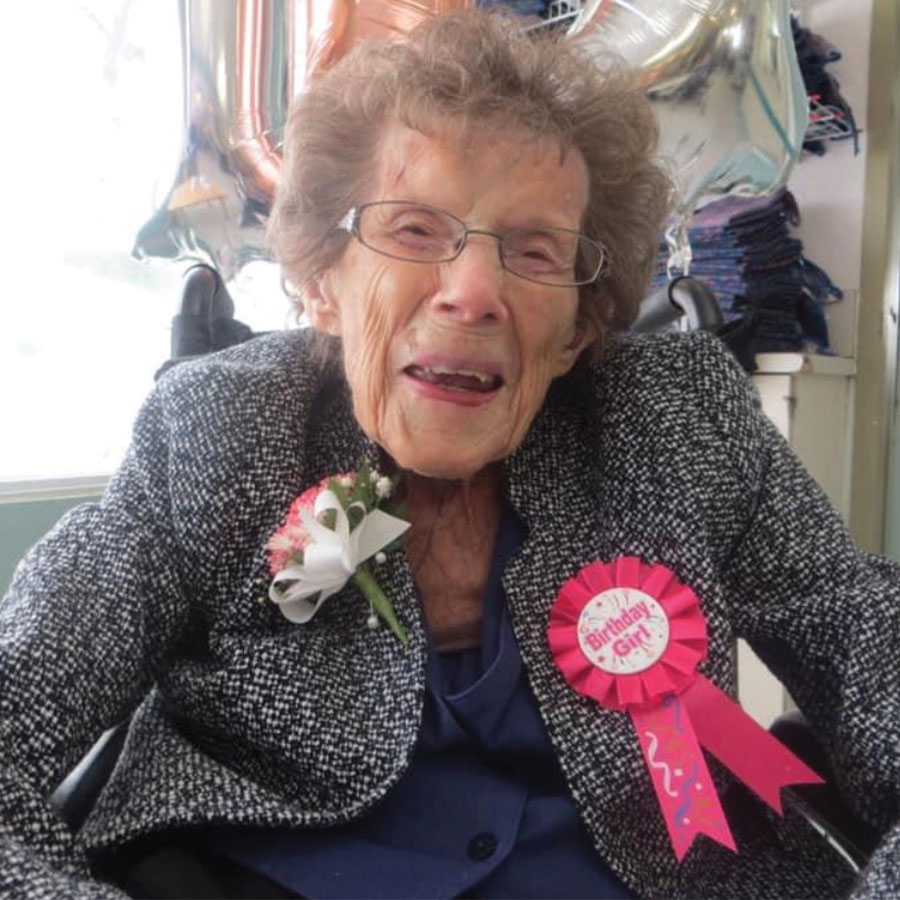 The supercentenarian, who goes by Mime, celebrated the occasion virtually with her family — who joined the Zoom call from as far away as Australia — at her long-term care home in Brandon.

“She’s amazing, she’s doing really well for 111,” Raunora Westcott, one of Mime’s 15 grandchildren, told CTV News. “One thing we’re really lucky to have is such a sharp memory from her. She really can tell some great stories from every decade of the past century.”

Her stories include recollections of the 1918 Spanish flu pandemic, which infected 500 million people, or one-third of the world’s population, and killed an estimated 50 million people worldwide, according to the CDC.

Face masks, for instance, bring back vivid memories. Wescott can recall her mother instructing her and her siblings to cover their faces with handkerchiefs soaked with eucalyptus oil, which, at the time, was used in both prevention and treatment of the illness.

Raunora called her “the most special grandma I could ask for” in a tweet wishing her happy birthday and thanking her nursing home for making her feel special. Raunora says Wescott’s home is one of the few in the province that hasn’t been hit hard by COVID-19, which she says is owed to both the diligence of staff and the facility’s procedures.

Keys to a Long Life

The Manitoba native was born in 1911 in the small farming community of Lauder. As the middle child in a large family of 11 children, she often worked on the family farm and later became a teacher. She had five children with her husband, who died when she was in her early 50s.

With two of Westcott’s sisters living past 100 as well, Raunora believes her grandmother’s longevity has something to do with her genes, but also her healthy and active lifestyle.

“I don’t ever remember her sitting down, like she was always up and moving around,” said Raunora.

“Just be yourself and enjoy it,” was the longevity advice Westcott offered ahead of her 110th birthday last year in an interview with CBC News. Although, she was well aware of some of the other factors involved.

“I think it’s just how you live. I don’t smoke … I take care of myself and I am taken care of, too,” said Westcott.

She also acknowledged the genetic component, but said it may have had something to do with the environment she shared with her siblings on the farm as well.

“We were raised as simple people. Ordinary food, nothing too fancy. Just what you needed, I guess,” she told CBC News.

Wescott’s theory on both her genes and lifestyle playing a role in her longevity are backed by science. The retired teacher was among a number of centenarians included in the New England Centenarian Study, which aimed to “discover the secrets of a long, healthy and happy life.”

“It’s a bit like winning the lottery,” Dr. Thomas Perls, a geriatrician and the director of the Boston University study told the Brandon Sun.

“It’s very, very rare,” he said. “It’s not because of a single genetic variant that makes them rare. It’s got to be a combination of genetic variants. Each one might be relatively common, but it’s getting the right combination that is rare.”

“We know that extreme longevity like this can run strongly in families,” Perls said, adding that families share more than just genes.

“They also have habits in common that can be pretty powerful when it comes to how well a person ages,” he said. “That could include whether or not they smoke, what their diets are, their exercise habits and so on.”

Fortunately, Westcott’s grandchildren appear to have absorbed plenty from their supercentenarian matriarch, including a lesson that many of us can learn from as the pandemic drags on.

“Her advice to people would be to be content with what you have and to hold your relationships, your family and friends, those relationships closely and really care for others around you,” said Raunora.