Later in Love: How a Visit to a Hair Salon Led This Vancouver Couple all the Way to the Altar 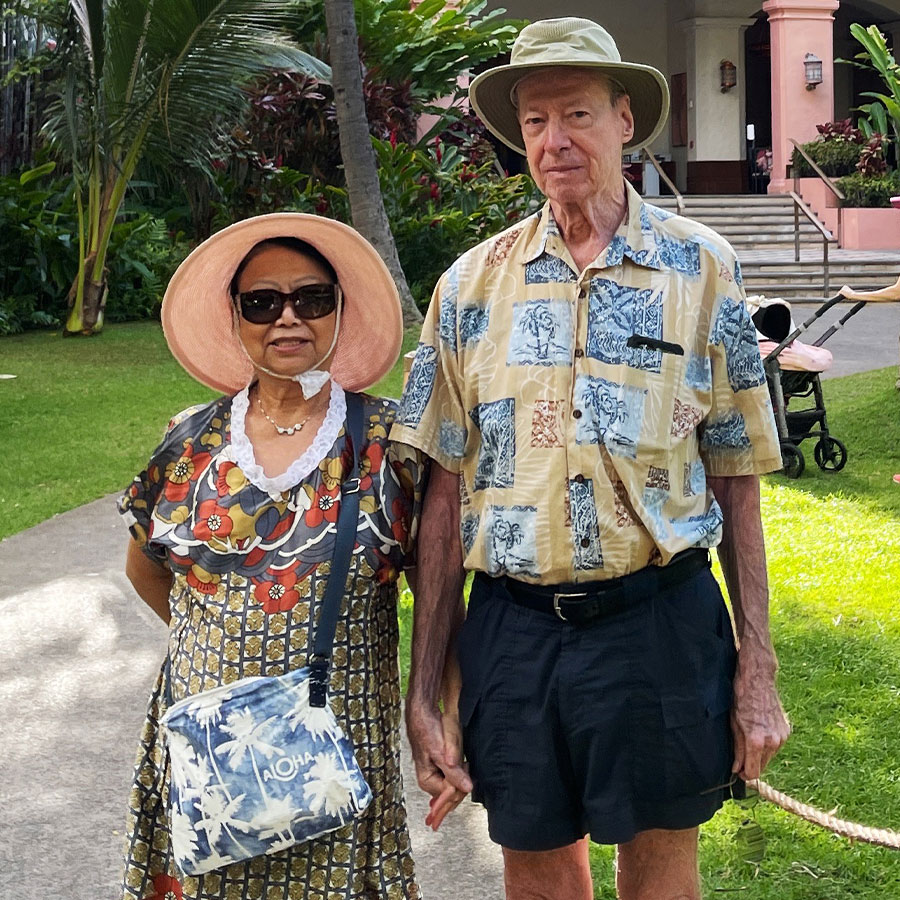 The couple, in Hawaii, 2022. Photo: Courtesy of Lena Nguyen

As a widow and single mom, Lena Nguyen, now 82, emigrated in the 1970s from Vietnam to Canada, where she settled in Ottawa with her four children, Lyn, Van, Tu and Tom Ly. In the ’90s, she moved to Vancouver, where she owned and operated a beauty salon called Lena’s. Floridian engineer Jack Barrett, now 90 — had recently relocated to the West Coast when he strolled into her shop looking for a haircut. Here’s how they found love.

Lena Nguyen: Twenty years ago, Jack came into my salon for a trim. He was tall and handsome — 6-4 — and a polite, proper gentleman. It was love at
first sight.

Jack Barrett: She was so beautiful and vibrant. Full of life and energy. I started visiting more and more often. I like to keep my hair very neat.

LN: Soon enough, he was visiting daily — whether he was getting a haircut or not. He’d even bring lunch and snacks!

JB: I think, after about the third haircut, I asked her on a proper date. We went to the Fairmont Hotel for their famous Sunday brunch. I was trying to impress her with my know-how about food in the city, but the truth is I was brand new and just getting my footing.

LN: I was impressed, but I’d much rather cook. I like to take inspiration from foods from all over the world and then make the recipes my own. We rarely eat out anymore.

JB: Lena is very strong-minded and has such interesting stories to tell. I love listening to her. She’s a hard-working, one-woman show, who had run a successful business for many years. She has a real knack for being at the centre of things and people.

LN: I’d soon learn that Jack has a genius-level IQ. He was one of the very first engineers at IBM, and even remembers when Steve Jobs came in to present the notion of home computers.

JB: I think I said something clever like, “Who would want that?”

LN: Jack also taught me how to trade and invest in stocks, as I retired from the beauty industry. This helped us purchase a home in Hawaii, which we needed because Jack’s an American citizen and was only able to be in Canada for six months a year. Being apart was the most difficult time.

JB: But the Hawaii home let us be together the remaining six months of the year. We both fell in love with Hawaii because of the temperate climate and proximity to Vancouver.

LN: Twenty years later, Jack wanted to make a commitment. Together, we picked out a beautiful ring from Harry Winston. Jack talked me into it.

LN: We’re planning a ceremony later this year with all the family in Vancouver. In the meantime, we had a civil wedding with a simple ceremony right here in Hawaii.

JB: My favourite time of the day with Lena is around 5:30 p.m., just when the shade covers the pool and we go for an hour-long swim. Then we sit together in the hot tub looking out at the beautiful sunset over Magic Island Beach in Honolulu.

LN: We’re both true romantics. We were surprised at first, but love felt natural and comfortable. I believe love is timeless at any age, and we feel the same as we did in our 20s!

JB: We take and treat every day as a precious gift and we make each other laugh every day. We’re able to enjoy visits with the family (I never married or had kids, but Lena has four children and four grandchildren) throughout the year in both Hawaii and Vancouver.

LN: And, most important of all, Jack enjoys my cooking!

—As told to Rosemary Counter

Have you had a second chance at love? Zoomer is looking for couples to be interviewed for a new relationships column about falling in love later in life — whether it’s the first time or the fourth, as long as you’ve met the love of your life. If you’re 45-plus and have found your soulmate, we want to hear from you!

Send your name, email, phone contact and a brief summary of your story to [email protected] for a chance to be featured in an upcoming issue of the magazine.