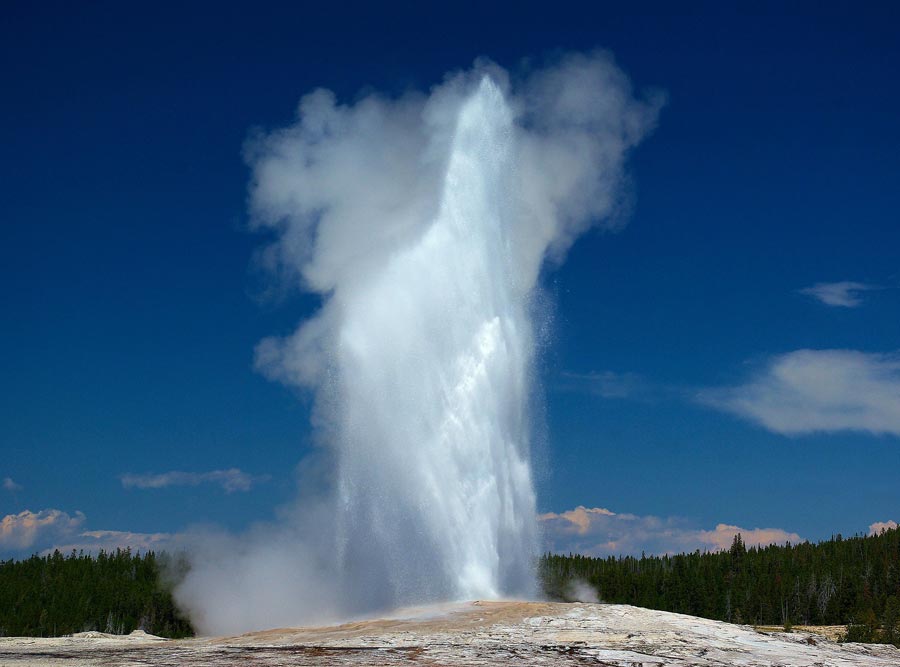 Old Faithful, the famous geyser in Yellowstone National Park can be counted on to erupt approximately every 90 minutes. Image by Mike Goad from Pixabay

Old Faithful, the famous geyser in Yellowstone National Park can be counted on to erupt approximately every 90 minutes, to the delight of tourists and photographers.

Fortis, meanwhile, can be depended on to raise its dividend at this time every year, through good times and bad.

This is the 46th consecutive year that Fortis has increased its payout, tying it with Canadian Utilities for the longest run in this country.

And it’s not going to stop anytime soon. The company is projecting annual dividend increases in the 6 per cent range at least until 2024. Perhaps we should nickname Fortis “Old Reliable”.

Fortis has been one of my stock selections since August 2005, when it was recommended in my Internet Wealth Builder newsletter at a price of $20.80 (adjusted for a subsequent 4 for 1 share split). The dividend at that time was the equivalent of $0.57 annually, to yield 2.7 per cent.

Based on the latest increase, the forward dividend yield is 3.56 per cent, using a share price of $53.60.

This is exactly how a top-quality dividend stock is supposed to work. Fourteen years after it was recommended, the market price is up 153 per cent and the yield is even higher than when it was first picked. If you bought at that time, your yield is now 9.2 per cent. If you don’t own shares, ask yourself why not.

Perhaps it’s a lack of familiarity. Although I have frequently written about Fortis, many investors still know little or nothing about the company, despite its dividend aristocrat credentials. Perhaps it’s because the head office is in St. John’s, Newfoundland and Labrador, a long way from the glittering towers of Toronto’s Bay Street.

But make no mistake about it – this is an impressive company. Fortis runs an international utility empire with assets worth $53 billion.

Fortis’s history dates back to 1885, when it was founded as the St. John’s Electric Light Company. It was renamed as Newfoundland Light and Power Company in 1924 and went public a quarter-century later, in 1949. In 1987, the company changed its name to Fortis, but its operations continued to be confined to its home province.

That changed in 1990 when Fortis acquired Maritime Electric in Prince Edward Island. In 1996, it moved into Ontario and in 1999 went international by acquiring assets in the Cayman Islands and Belize. The company continued to grow through more acquisitions in the Caribbean and across Canada and in 2012 it moved into the U.S. with a US$1.5 billion purchase of CH Energy Group, the parent company of Central Hudson Gas & Electric Corporation, a gas and electric utility in New York State.

That was just the start. The next year, Fortis announced an agreement to acquire UNS Energy, a gas and electric utility in Arizona for US$4.3 billion. In 2016, the company bought ITC Holdings Corp., the largest independent transmission utility in the United States, for US$11.3 billion.

Today, Fortis serves more than three million gas and electric customers across its system. Total revenue in 2018 was $8.4 billion.

Third-quarter results were consistent with a year ago, as you might expect from a utility. Adjusted net earnings were $287 million ($0.66 per share) compared to $277 million ($0.65 a share) in the same period last year.

For the first nine months of the fiscal year, Fortis earned $838 million ($1.93 per share). The comparable year-ago numbers were $825 million ($1.95 per share). There was an increase in the number of common shares outstanding this year, which explains the lower earnings per share.

When I first recommended buying Fortis back in 2005, I wrote: “This is a stock that offers steady and increasing cash flow and modest long-term growth potential with limited downside risk.”

More than 14 years later, the same words still apply. Ask your financial advisor if it is suitable for you.

Stock Market: Who Are the Winners So Far For 2019?

Money Smarts: Choosing a Retail Stock In a Changing Landscape