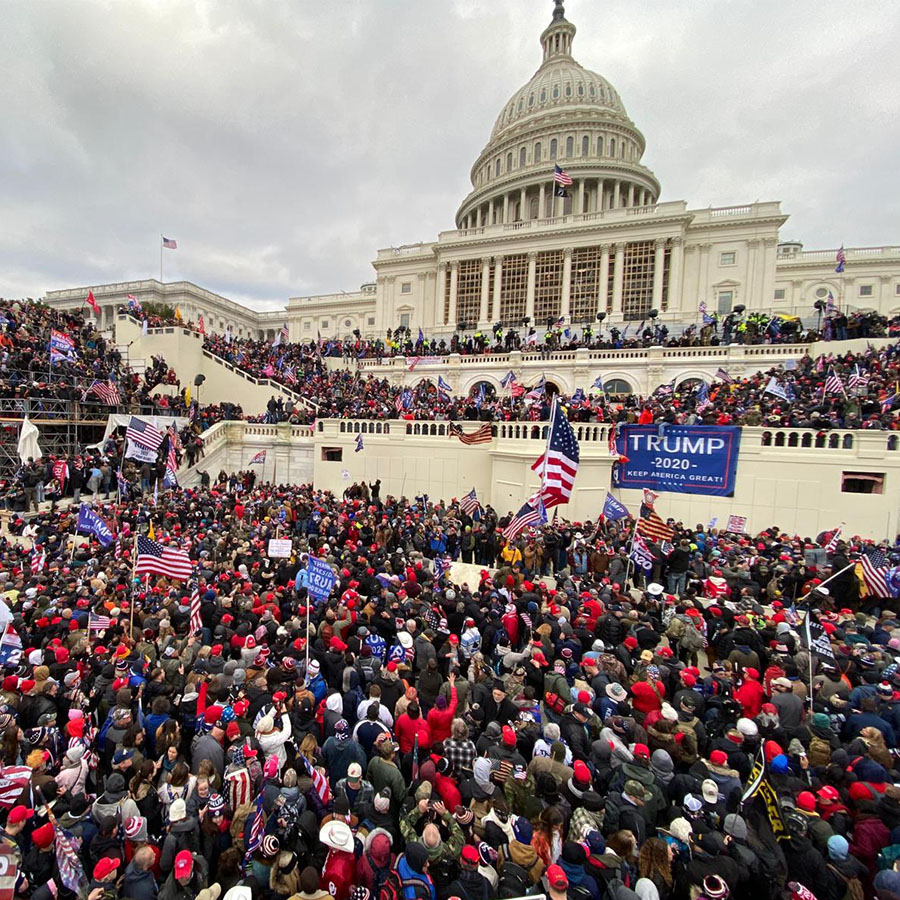 Late last night, after the shocking riots in the U.S. Capitol buildings had finally been cleared, Congress resumed its proceedings to ratify Joe Biden’s election victory.

Peace was finally restored in Washington after riot police dispersed the mob of Trump loyalists with tear gas and percussion grenades. As well as arresting 52 people, police also discovered two pipe bombs and a cooler of Molotov cocktails in the Capital buildings. During the height of the  mayhem, one woman was fatally shot by police and three other people died in what police are calling “separate medical emergencies.”

In the wake of this insurrection, the House of Representatives and the Senate resumed to certify the election results, a process that had been shut down by rioters earlier in the day. Both chambers voted down challenges to the November election and confirmed the Electoral College vote, thus formally recognizing Biden as the country’s 46th president.

Donald Trump, who earlier yesterday vowed he would “never concede” the results of the November election — a comment that sparked his mob of supporters to storm the Senate and House chambers and interrupt the certification process — has now grudgingly accepted defeat, perhaps finally realizing he was out of options.

And he’s also promised that he will peacefully relinquish power to Biden. In a statement published on social media by White House Communications Director Dan Scavino (Facebook has banned the President indefinitely and Twitter has suspended his account), Trump said:

“Even though I totally disagree with the outcome of the election, and the facts bear me out, nevertheless there will be an orderly transition on January 20th. “I have always said we would continue our fight to ensure that only legal votes were counted. While this represents the end of the greatest first term in presidential history, it’s only the beginning of our fight to Make America Great Again!”

It’s hard to know what he means by “only the beginning” or even whether he’ll stick to his promise of a “orderly transition.”

Legislators are now urging Vice President Mike Pence to invoke the 25th Amendment of the U.S. Constitution, which would remove Trump from the White House immediately if it’s determined he is unfit to “discharge the powers and duties of his office.”

However, with Congress formally affirming Biden as the country’s new leader, many Americans are breathing a sigh of relief that the crazy, chaotic and tumultuous reign of President Donald Trump is finally drawing to its end.

As angry mobs swarmed into the U.S. Capitol Building today, sending shocking images around the world of what looked very much like a coup d’état, President-elect Joe Biden, 78, stepped into the breach with a live television address urging protestors not to stoke the “flames of hate and chaos” but to honour the “majesty of American democracy.”

Biden was responding to the ugly scenes that broke out this afternoon in Washington, when thousands of Donald Trump supporters invaded the House and Senate chambers, smashed windows and battled police, all in a desperate and demented bid to upset the certification of the November election (a process that was underway) and overthrow democracy.

For weeks, Trump has been inciting his supporters with increasingly delusional ramblings that the election was rigged and that the Democrats had stolen the election. “We will never concede,” he said at a rally in Washington on Wednesday, a clarion call to the rioters that they should resort to any means to disrupt the transition of power.

Today’s assault on power was both surreal and shocking. World leaders roundly condemned the riots, including Prime Minister Justin Trudeau who Tweeted that he was “deeply disturbed and saddened” by the developments in Washington.

Into this tumultuous fray enters President-elect Biden, who is set to assume power in less than two weeks. The 78-year-old spoke with a strong, dignified and hopeful tone, foreshadowing what Americans may expect from their new leader in the upcoming years.

Today Biden was called on to soothe the anger. And he did just that, showing all the traits of a strong leader, a calm and experienced hand at the tiller, saying the things an American president should say and not resorting to the cheap, hateful, churlish messages so often adopted by Trump. And Biden’s mature response was a welcome antidote to the childish, reckless behaviour that  marred Trump’s one-term presidency.

It’s a tone that’s desperately needed by America at this moment. And it’s one that doubtlessly represents the change that is sweeping the country, which is symbolized first by Kamala Harris’s election as America’s first Black, South Asian and female vice-president, a sign of progress ushered in by Biden, the quintessential old white male, who chose her as his running mate after serving as second to Barack Obama, the country’s first African-American president.

Race, though, continues to bedevil the moment. One of the insurgents who breached the Capitol waved the Confederate flag — the first time the flag has been lifted in those halls. And a noose, which historically represents lynching, had been raised on the walls of the Capitol, above where the inaugural stage was being built. It was also jarring to note that the overwhelmingly white MAGA mob received nothing like the overwhelming show of force and brutal police pushback that peaceful Black Lives Matter protestors have encountered. Just last summer, Trump used the military to teargas religious leaders and the media among protesters as he walked across Lafayette Square for a photo op.  As well, Trump’s machinations to overturn the election have involved  attempts to disenfranchise African-American votes.

But one hopeful note today were the results of run-off elections in the formerly deep red southern state of Georgia.

Jon Ossoff, the first Jewish man, and Raphael Warnock, the first African-American from that state, were voted into the Senate, turning it blue along with the House and the White House. Martin Luther King Jr. once said, “the arc of the moral universe is long but is bent toward justice,” and Warnock is the preacher who currently shepherds King’s old pulpit at Ebenezer Baptist Church. Harris, who, as vice-president, is also president of the senate, will now have the deciding vote as the new congress sits.

Biden chastised those who are trying to forcibly overturn these “incredible opportunities” that are taking shape as the Democrats move into power.  “This is an assault on the rule of law,” he said, “an assault on the most sacred of American undertakings.”

Describing today’s unspeakable events with words like insurrection, siege and sedition, Biden invoked the country’s proud history of championing democracy through decent and honourable rule and the peaceful transition of power. “Our nation, so long a beacon of hope and light for democracy, has come to such a dark moment.”

In the same vein, he quoted the U.S. Constitution as well as President Abraham Lincoln, who described the American way as “plain, peaceful, generous, just — a way which, if followed, the world will forever applaud, and God must forever bless.”

Despite what he called the “assault” on the “citadel of liberty” as the president-elect referred to the Capitol building today, Biden finished his speech with a note of optimism and a call for unity.

“There’s never been anything we can’t do when we do it together. And this godawful display today is bringing home to every Republican, Democrat and Independent in the nation that we must step up. This is the United States of America.”