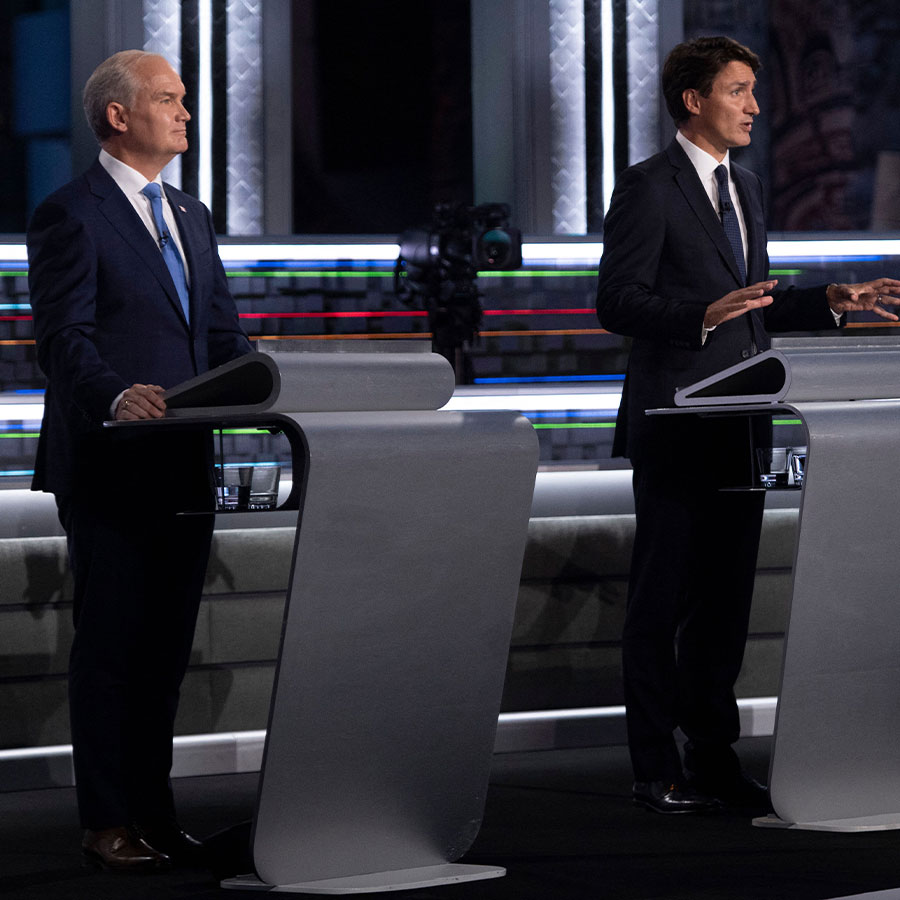 Foreign investors are worried that Canada's federal election could result in a deadlock that hampers economic recovery from the pandemic. Photo :Justin Tang/POOL/AFP/GettyImages

Foreign investors are growing more worried that Canada’s federal election on Monday could result in a deadlock that hampers Ottawa’s response to the COVID-19 pandemic and further slows the economic recovery from the crisis.

Polls show Prime Minister Justin Trudeau’s center-left Liberals virtually tied with the opposition Conservatives ahead of the Sept. 20 vote, raising the prospect that no party will be able to form even a stable minority government. Adding to the uncertainty is an expected increase in mail-in voting that could delay the counting of ballots in some key electoral ridings.

Financial markets generally view Canadian elections from the vantage point of which of the big parties would be most friendly for investors, but that tendency may take a backseat this time to the desire to have a government quickly in place in a crisis.

The results of Canadian elections typically are known within hours of the polls closing. Even when no party has won a majority of the seats, it is usually clear which will form the government and what the general policy priorities will be.

An outcome “that leads to a gridlocked government is going to complicate the recovery going forward, and I think that’s why you are probably going to see some (investor) hesitancy ahead of the election,” said Edward Moya, senior market analyst at OANDA in New York.

“Right now, we’re in the process of an economic recovery that needs everything to line up nicely.”

Trudeau, who has been prime minister for six years, has relied on the backing of the New Democrats since failing to win a majority of the seats in the House of Commons in the 2019 election. Polls show the smaller left-leaning party poised to do better on Monday, with enough support perhaps to compel the Liberals to tilt to the left if they wish to remain in power.

Trudeau’s government has spent billions of dollars to stem the fallout from the pandemic, while the Bank of Canada has cut interest rates and purchased bonds to stimulate the economy. Although the central bank has vowed to keep its key interest rate at a record low of 0.25% until economic slack is absorbed, troubling signs have appeared on the horizon.

Canada’s economic growth slowed in the second quarter and annual inflation spiked in August to an 18-year high, taking some of the wind out of the sails of the Liberal leader’s economic argument for reelection.

The Canadian dollar has fallen 1.1% to about 1.2650 per U.S. dollar, or 79.05 U.S. cents, since Trudeau called the election in mid-August, and speculators have turned bearish on the currency for the first time since last December.

The market’s measure of expected volatility for the currency over a one-week period, a timeframe that covers the election, has climbed to an annualized rate of about 7.5% from less than 5% in August.

Equities investors are casting a nervous eye over some of the campaign promises made by the parties, including Trudeau’s vow to raise corporate taxes on the most profitable banks and insurers to help pay for the cost of the recovery and his pledge to immediately cap oil and gas emissions.

“If it started to lean towards a Liberal majority I would begin to sell energy and banks,” said Greg Taylor, a portfolio manager at Purpose Investments in Toronto.

There is also nervousness over a promise by the Conservatives, the main opposition party, to increase foreign competition in the telecommunications sector as well as a pledge by the Liberals to curb excessive profits from rental housing, which could hurt real estate investment trusts.

“There is a lot of political posturing and rhetoric,” said Russil Lea, a portfolio manager at Nicola Wealth in Vancouver. “The race looks very tight and the only certainty right now is uncertainty as far as how the election will go.”