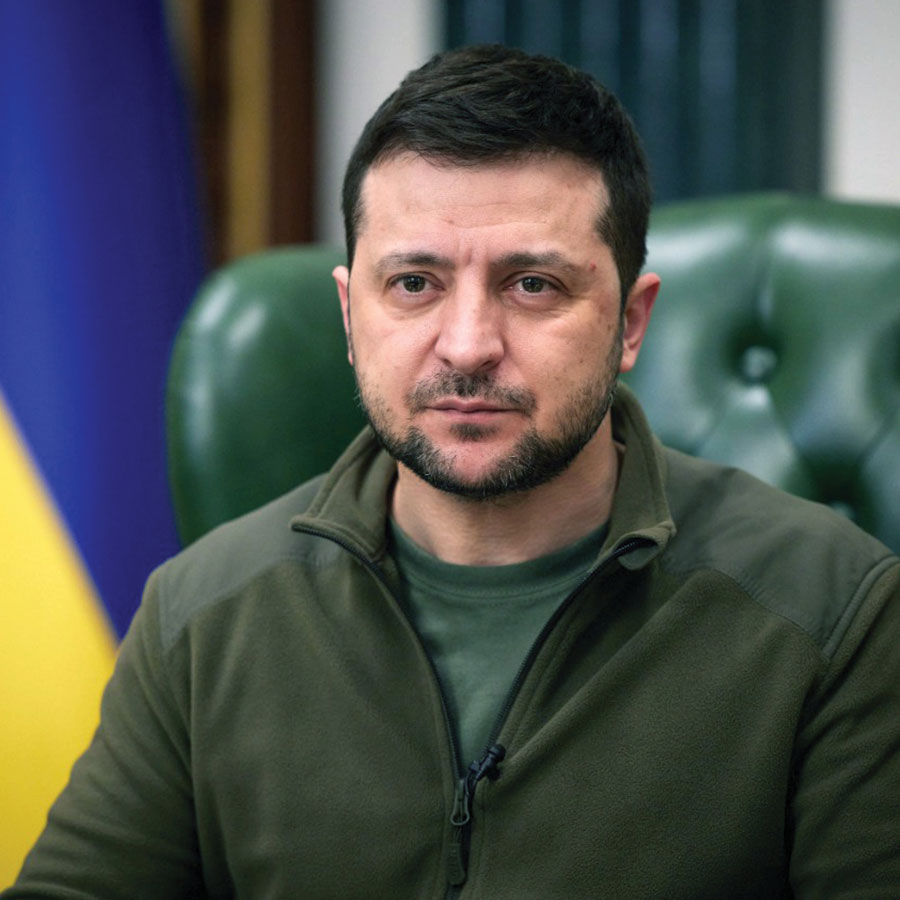 Ukrainian President Volodymyr Zelenskyy — pictured here during during his regular address to the nation last week — asked Canada for aerial support and to enforce a no-fly zone over neighbouring European countries while addressing the country's Parliament on Tuesday. Photo: Ukrinform/Future Publishing/Getty Images

Speaking to both houses of Parliament by video from the war zone in Kyiv, Zelenskyy stressed that while Canada’s humanitarian aid and sanctions against Russia are helping, they alone will not be enough to avert President Vladimir Putin’s “attempt to annihilate the Ukrainian people.”

The only way, said Zelenskyy, to stop Putin is for NATO countries like Canada to provide aerial support as well as enforcing a no-fly zone over neighbouring European countries to stop Russian planes and missile from bombarding Ukrainian cities and its people.

Introducing Zelenskyy, Trudeau, who was among the many wearing a blue and yellow lapel pins, described him as a “courageous and exceptional” leader and referred to the 1.4 million Canadians of Ukrainian descent who have settled here.

Zelenskyy used his speech to draw a picture of what life looks like in Ukraine over the 20 days since the Russian military moved in and targeted civilians and destroyed  cities, schools and hospitals, and bombed humanitarian and food supply lines. “I know that you all support Ukraine. But I would like you to understand what we feel every day.”

“Justin,” said Zelenskyy, pleading to the prime minister, “Can you imagine you, your children hear all these severe explosions. Bombing the Ottawa airport. Or other cities. Can you  imagine that?”

He continued, asking the gathered lawmakers how they would feel if the CN Tower or Vancouver or Edmonton were bombed. How would we explain this to our children, he asked, when “every night is a horrible night.”

“Each city that they’re marching through, they’re taking down Ukrainian flags,” he said. “Can you imagine someone taking down your Canadian flags in Montreal and other Canadian cities I know that you all support Ukraine.”

Zelenskyy thanked Canada for its help — especially for economic sanctions against Russia or through humanitarian aid. However, he said, it’s not enough. “This did not bring the end to the war. You all need to do more to stop Russia and protect Ukraine. And by doing that to protect Europe from the Russian threat.”

Zelenskyy’s big ask is for aerial support for Ukrainian skies and a no-fly zone over European countries to stop Russian attacks.

“Please close the sky, close the airspace,” he invoked Parliamentarians. “Stop the bombing. How many more cruise missiles have to fall on our cities until you make this happen?”

“Canada has always been steadfast in their support. You’ve been a reliable partner to Ukraine and the Ukrainian people,” he said. “We’re not asking for much. We’re asking for justice, for real support that will help us to prevail, to defend to save lives.”

“I’m confident that together we will overcome and be victorious. Glory to Ukraine. Thank you Canada,” he concluded.

Zelenskyy’s moving speech touched off a huge standing ovation in the jam-packed House of Commons, with chants of “Glory to Ukraine” filtering down from the gallery.

Zelenskyy is making the rounds of NATO countries (he will address the U.S. Congress tomorrow), appealing for them to step up their support of Ukraine with aerial support. NATO has so far refused to listen to this request, fearing that it will lead to an escalation of the war outside of Ukrainian territory.

After the speech, the Russian foreign ministry announced that Trudeau and almost every single member of parliament have been banned from entering Russia.