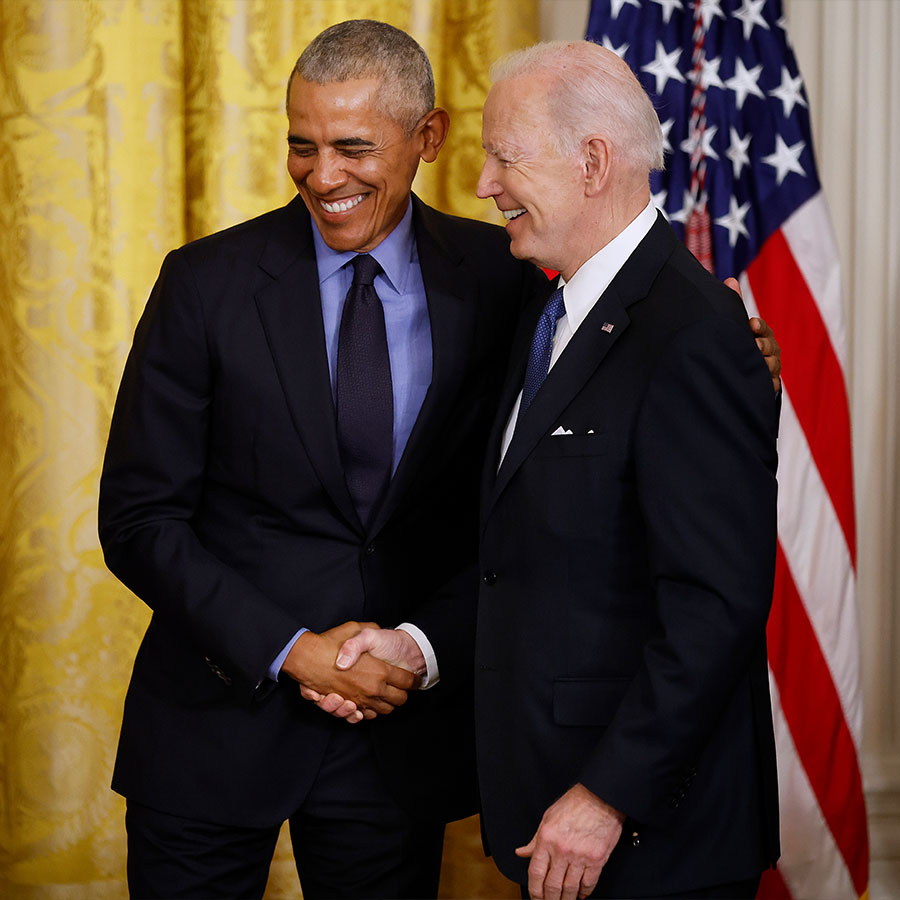 Former President Barack Obama and President Joe Biden shake hands during an event to mark the 2010 passage of the Affordable Care Act in the East Room of the White House. Photo: Chip Somodevilla/Getty Images

Former President Barack Obama returned to the White House on Tuesday for the first time since leaving office in 2017 to tout the benefits of his signature health care law and bolster his friend and former governing partner, President Joe Biden.

Obama arrived in the East Room to robust cheers from the assembled crowd of Congress members and administration staffers, and remarked on the changes that had been made in the White House since he was last there – notably the arrival of a cat.

“Bo and Sunny would have been very unhappy,” he quipped, referring to his family’s dogs.

Obama jokingly referred to Biden as “vice-president” before correcting himself, inspiring a salute from Biden, then offered broad praise of the Affordable Care Act, whose passage he described as a “high point” of his time in office.

“If you can get millions of people health coverage and better protection, it is, to quote a famous American, a pretty … big deal,” Obama said to hoots of laughter from the crowd, referencing an off-color Biden remark picked up by a hot mic when the law was signed.

Biden, who hosted Obama for lunch, joked that the two men did not know who should sit where when they dined, and lauded Obama for his leadership on the health care law.

“The Affordable Care Act has been called a lot of things but Obamacare is the most fitting,” Biden said.

While Obama remains a popular figure, Biden faces moribund public approval ratings thanks in part to high inflation and the lingering COVID-19 pandemic. As a result, Democrats face the risk of losing control of at least one, if not both, chambers of Congress in November, which would bring Biden’s legislative agenda to a halt.

Biden unveiled a measure to fix an element of the health care law known as the “family glitch” that left family members of those with access to employer-provided health plans ineligible for certain subsidies.

He finished his remarks by saying, “Barack, I’m going to remind you: it’s a hot mic.”

Focusing on health care has helped Democrats politically in the past. Obamacare was the former president’s top legislative accomplishment, and Republicans have repeatedly tried and failed to repeal it.

Obama and Biden became friends during Obama’s time in office, meeting for lunch weekly. Their families became close and Obama spoke at the funeral of Biden’s son, Beau.

“They are real friends, not just Washington friends, and so I’m sure they will talk about events in the world as well as their families and personal lives,” White House spokesperson Jen Psaki told reporters on Monday.

The White House said the proposed adjustment to the Affordable Care Act, put forward in a rule by the Treasury Department and the Internal Revenue Service that must be finalized, would save hundreds of dollars a month for hundreds of thousands of families.

It said the “family glitch” affects some five million people and “has made it impossible for many families to use the premium tax credit to purchase an affordable, high-quality Marketplace plan.”