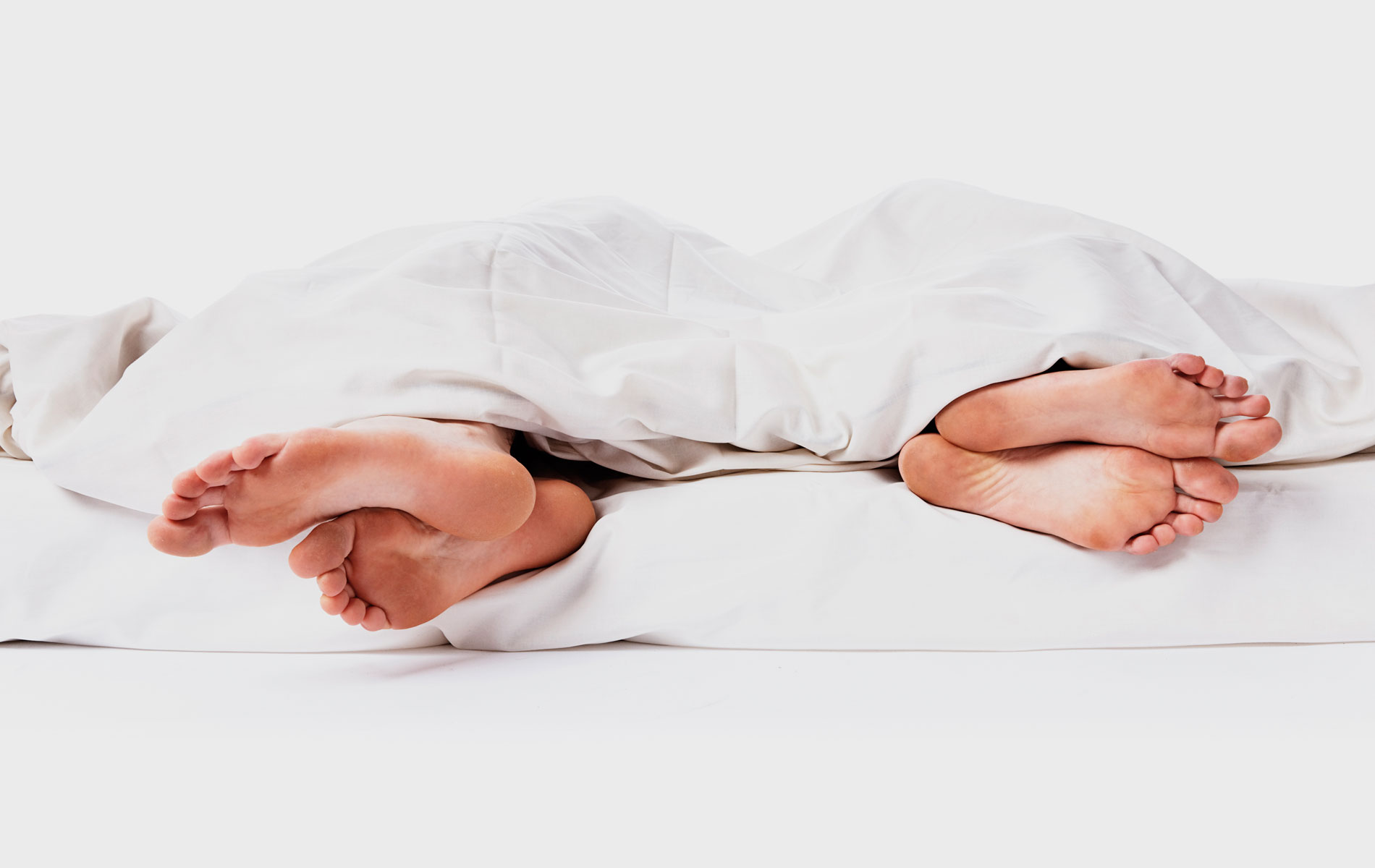 When long-term partners don’t agree on how often to have — or not to have — sex, does that spell doom beyond the bedroom?

Just how important is sex in a long-term relationship? Right up there with food and water, sex is a basic human need and one that certainly doesn’t disappear with age. Rolling over and ignoring problems is never an option.

Nor is unilaterally changing the sexual contract at the heart of a relationship. That is a flashing red light, signalling mayhem and despair on the road ahead. A Zoomer reader writes (and we paraphrase here, to keep things anonymous, because lopsided desire is a painful and deeply private issue):

“What do you do when you’re married or in a long-term relationship, and one of you doesn’t want to have sex any more? Therapists suggest ‘more sex,’ but what if your partner literally, seriously, never wants to have sex? Open marriage? Divorce? And are most couples lying about having loving sex regularly?”

Even in our new era of confessional social media, with a Google of answers to our toughest questions at our fingertips and a community found so readily online for even the most niche of subcultures, more overt forms of popular culture have done a poor job of portraying couples coping with this common problem. Polyamory, in particular, is still shrouded in mystique. In the late ’60s, we had the film Bob & Carol & Ted & Alice experimenting with wife-swapping (though that term now seems almost offensive); in the ’90s, we had couples from the ’70s exploring key parties in The Ice Storm with dysfunctional results. There is even the wistfully “perfect” scenario of married-friends-with-benefits that wasn’t so perfect in the end, as seen in Same Time, Next Year.

More recently, we had the remarkably nonjudgmental Big Love exploring fundamentalist Mormon polygamy in Utah on cable. But in wider pop culture, people who cheat, even with permission, don’t get a fair shake. For a truly great example, you have to look back on the storied partnership of Franklin and Eleanor Roosevelt.

The original power couple had an incredibly convoluted set of rules around their secret extramarital adventures. Of course, none of the shenanigans—with secretaries and bodyguards, neighbours and mutual friends, and in Eleanor’s case both men and women—was publicly revealed during their lifetimes. But biographers, particularly the excellent Hazel Rowley of 2010’s Franklin and Eleanor: An Extraordinary Marriage, persisted in digging up the real deal. See, the Roosevelt marriage after six pregnancies had run its course on intimacy, but the partnership was intact. Eleanor found out about one of Franklin’s long-time dalliances but forgave him during the war and when he subsequently was paralyzed by polio (which, nota bene, didn’t dim his ardour). They went on with a “don’t ask-don’t tell” policy for another couple of decades and nearly four terms of his presidency. This type of arrangement is what many people suspect is at the core of Bill and Hillary Clinton’s enduring union.

But let’s get back to unpeeling the layers of this reader’s query. The good news is that you needn’t suffer in silence when your needs aren’t being met. There are answers, albeit not easy ones. But first, this is tricky terrain to negotiate, and you need some outside help to unravel all the knots in the bedsheets.

Get thee to a therapist, says Joan Price, Sebastopol, Calif.-based advocate for ageless sexuality. “And if your partner won’t go with you to therapy, go on your own!” Price is the author, most recently, of 2015’s The Ultimate Guide to Sex After 50. Now 74 herself, the writer and speaker says she wrote a chapter about what happens in this scenario, titled “When Intimacy Ends.”

“I get distraught emails all the time from the wife or the husband, saying their partner doesn’t want to have sex, doesn’t want to get help and thinks this is all fine. They are ready to sail on to the next phase of life sexless,” she says. “These emails are full of anguish. ‘I’m not ready to pack up my sexuality and throw it away,’ they will say. And ‘I want my partner, but if my partner is not willing, what do I do? Cheat? Get a prostitute? Wait for them to say it’s okay to find someone else?'”

The reasons for a sex disconnect “are many and varied,” says Dr. David McKenzie, a couples and sex therapist serving the Greater Vancouver area. Let’s address the biggest fear first, and there is no way to sugar-coat it. “In a situation where a couple’s sex life suddenly ends, it should not be ignored,” says McKenzie. “It could point to a variety of reasons, such as depression, exhaustion or possibly even the involvement of another outside the marriage.”

Of course, there are physical challenges that can multiply with age, but we aren’t talking here about erectile dysfunction or the pain and discomfort that can come with menopause, all of which can be treated. Nor are we talking about chronic illnesses, such as diabetes or heart disease or mental illness and the treatments thereof that can also affect libido: these issues can all be addressed with alternative ways of showing intimacy to maintain strong bonds, says McKenzie. He uses the highly evocative term “outercourse,” so evocative in fact that it immediately makes clear how couples can work around issues specific to penetration-based intercourse.

So we don’t get mired in logistics, we are talking here about a flat-out refusal by one partner to have sex, what might cause that and how it can be addressed. Because understanding the cause of the problem, says McKenzie, will help guide you toward your available options and ultimately your decision together about how you both handle the crisis.

“Not all couples want to have sex,” he says. And if you both agree, then there is no problem. But if you don’t, “Loss of interest in sex can be a sign of other problems in the relationship, some of which may be caused by physical or mental health issues or, in rarer cases, by such things for example as one partner’s excessive gambling or one partner’s having an issue with drug or alcohol addiction.” These issues need different kinds of treatment.

You need a solid base. “A relationship has to be good enough to work on sexual issues,” says Dr. Alina Wydra, a psychologist in private practice in Vancouver who specializes in sex and relationship therapy. There is also the familiarity factor working against you. “At the beginning of a relationship, sex is new and exciting,” she says. “Sex in a long-term relationship needs to be redefined. As it becomes less about the excitement of exploring the new, it needs to focus instead on exploring depth and on being an expression of love. It needn’t get stale but it takes effort to maintain its quality.”

There could be an even bigger mic drop in the offing. “A new or emerging sexual orientation that was either latent or ignored by one partner is quite rare, but it can create sexual problems,” says McKenzie. Times have changed, and in the current Wild West pop culture climate, outdated restrictions on sexual orientation and gender orientation no longer apply. And older role models such as Caitlyn Jenner are carrying the flag to lead us into a new era of self-realization.

It can also be those new and soaring expectations that are failing us these days. And it is no wonder, with a new world at our fingertips.

What is “normal” in sex is a concept that has challenged humanity since we lived in caves. Normal is what works for you. “Some couples do not want to have sex,” says McKenzie. “And that is fine and good, if both agree.” There are some clinical guidelines here to define frequency. “Less than 10 times a year is considered a non-sexual marriage,” he says. “And 11 to 20 times a year is a low-sexual marriage. In your 20s and 30s, two to three times a week is average. In your 50s on, once a week or every two weeks. But there is no such thing as normal,” he emphasizes. “Normal is what partners negotiate with each other. For some people, twice a year is quite fine. Or not at all fine.”

Fixing things, whatever the cause of disrupted relations, is not rocket science, say the experts. There just has to be the will to do so present in both parties. Negotiation and—that dreaded therapy word—communication is the key.

“By the time a couple comes to me,” says Wydra of a lopsided desire issue, “they are past the point of acceptance. People tend to get into some kind of a routine that doesn’t include having dates and romance, so all that needs to be addressed. Communication about sex suffers. Perhaps your ego and your partner’s ego have been hurt. There is so much self-concept tied up in our sexuality.”

Which means that there has to be a negotiated agreement to stop having sex, if that is the choice. “Older couples may come to a place where sex is just not that important anymore. They become much more like companions than sexual lovers. Such arrangements need to be discussed as a couple,” McKenzie says. “If one just shuts down without communication and says there will be no more sex by his or her choice, then that would be grossly unfair.”

So we circle back to our core conundrum. Basically, our reader had the two options down when there is a one-sided flat-out refusal to have sex—sex outside the relationship or the ending of the relationship—but there are more nuances and, indeed, much more hope than that.

If you want to seek sexual satisfaction outside the marriage but still retain that marriage, then you have to earn your partner’s blessing.

If you want to stay in a marriage and deny sex or alternative forms of intimacy for whatever reasons, you have to find a way to make it work for your partner. “If or when a partner chooses to seek sexual satisfaction outside the primary relationship because the partner no longer wants sex, it must be done with both partners communicating thoroughly and agreeing. An ‘open relationship’ carries the possibility of an asteroid hitting the primary relationship. It must be handled with great care and respect. In my clinical experience, most open relationships do not work.”

Polyamory is not that rare, says Price. “From what people report to me as their best option is when the partner who doesn’t want to have sex anymore says, ‘I give you my blessing to have sex with someone else. You have the right to that joy.'”

Price describes two approaches to opening up your relationship. “You can give permission and insist on discretion, the ‘I don’t want to know specifics’ route. Or you can agree your partner can go outside the relationship but set firm boundaries. Only under certain circumstances; when they are out of town; when you know in advance; when you approve the person. Decide what matters to you both. Decide how do we do this brand new thing at our age.”

Price says working together with a sex therapist who is open-minded and knowledgeable about polyamory is key to success. “Don’t go into it blind. There are rules, there are books, go to counselling.” Your original agreement will probably need revising, she says, so “come back, keep talking and renegotiate the boundaries whenever needed.”

If your partner insists on monogamy but isn’t willing to have sexual intimacy and won’t work on it with you, you may decide that you can’t stay in the relationship if it means living without sexual joy. But see a counsellor first. Go on your own if your partner won’t go with you.

Get It On: Cannabis Linked to Enhanced Sex Drive

10 Foods To Put You In the Mood