‘The Irishman’ and Digital De-Aging Technology: Fountain of Youth, or Folly, for Aging Stars? 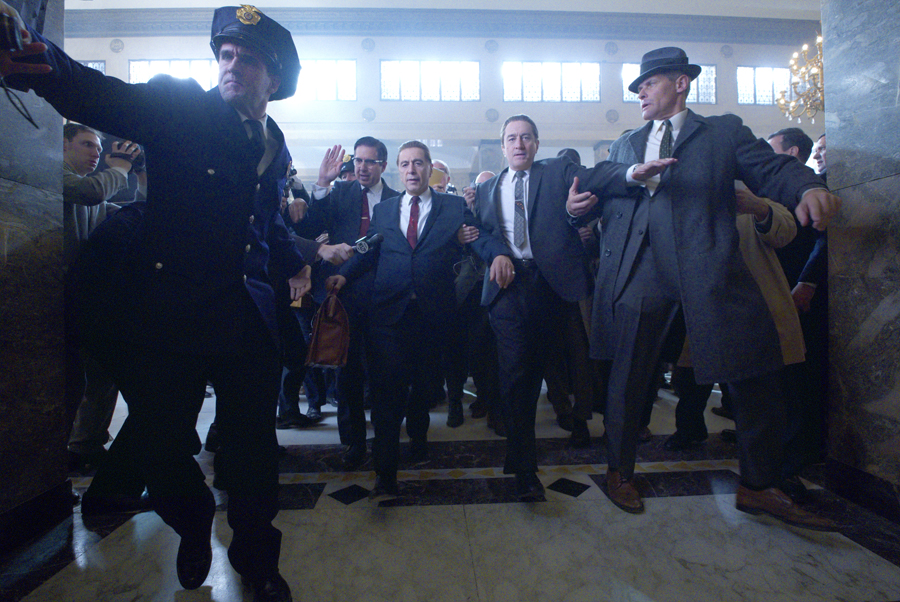 The Irishman image courtesy of Netflix

Director Martin Scorsese’s epic The Irishman, which premiered on Netflix this week, made headlines as much for its use of digital de-aging technology, which aims to return the film’s stars to their youthful looks, as it did for the star-studded cast itself — a who’s who of classic mob movies including Robert De Niro, 76, Al Pacino, 79, Joe Pesci, 76, and Harvey Keitel, 80. To mark the Netflix release, we revisit Jim Slotek’s assessment of whether digital de-aging technology will prove a boon, or bane, to older Hollywood stars.

In May, 2006, I interviewed Patrick Stewart for X-Men: The Last Stand and we discussed the digital face-lift his Prof. Xavier and Ian McKellen’s Magneto received for the opening scene, a 20-year flashback in which the two have their first encounter with Jean Gray as a super-powered child.

Neither of us quite appreciated the history it represented for the future of cinema. Stewart called it, “an interesting acting exercise” and said that when he saw the script, he assumed younger actors would play them, “or we’d be spending an awful lot of time in makeup to look 20 years younger.”

Instead, he was assured, there was an app for that. (Paraphrasing, of course — that expression hadn’t been coined yet).

Then-cutting-edge de-aging technology made Stewart look like he did as Captain Picard in the first season of Star Trek: The Next Generation. Coincidentally, it had been 20 years since I first interviewed Stewart on that show, and thought it was a pretty accurate, if slightly pasty rendition of the man I met back then.

Flash ahead 13 years and at least 22 more Hollywood movies have digitally “de-aged” their stars.

Most of them, because of the prohibitive cost, have been superhero or big-budget action films. Arnold Schwarzenegger did it twice in the later Terminator movies. Orlando Bloom was de-aged in the Hobbit movies as were Michael Douglas, Michelle Pfeiffer and Laurence Fishburne in Ant-Man and The Wasp. Nicole Kidman did it in Aquaman.

Save for Samuel L. Jackson, who was de-aged for the role of Nick Fury in February’s Captain Marvel, the technology has mostly been used for flashback scenes.

In the Hobbit movies, set before the events in Lord of the Rings but shot a decade later, it was used to underscore the fact that elves do not age. And it’s hard to imagine Brad Pitt filming The Curious Case of Benjamin Button without that technology.

But today, digital technology is prone to prove controversial. As such, there’s a crisis of conscience among serious movie fans as de-aging invades the gangster canon of Martin Scorsese with The Irishman.

Taking place over 60 years, the flashback reminiscences of aged hitman Frank Sheeran (Robert De Niro) required face-fixing for De Niro, 76, Al Pacino, 79, and Joe Pesci, 76, for much of the movie. If the “uncanny valley” between reality and the digital realm requires time and sensory adjustment, the viewer is afforded that. By many accounts from the first people to screen the movie, they needed an hour before it felt “normal.”

As for the actors, Pacino joked at a press conference, “I can extend my career another 30 years!”

But the joke sent shivers through some. “Even though he was making a self-deprecating joke, that kind of scared me,” the veteran film critic Carrie Rickey tweeted.

The gamut of what’s possible has widened considerably. But let’s start with what “being younger” means.

Do you render these famous actors “young” in the way we remember them in real life? (As they did with Robert Downey Jr. in an ‘80s flashback in Captain America: Civil War, with the FX people using the young Downey in Less Than Zero as a template).

Or do you turn them into younger versions of the character they’re playing — younger but full-faced in The Irishman, such that De Niro does not evoke Taxi Driver’s Travis Bickle? Or, in the case of Will Smith in the upcoming Gemini Man, young and pumped, rather than the skinny teen we knew as the Fresh Prince. Does knowing what they really looked like at that age take us out of the performance?

And what about the analog approach to “flashbacks” and childhood scenes? Careers have been launched playing younger versions of older stars (Mayim Bialik, of Blossom and The Big Bang Theory fame was first noticed playing Bette Midler as a child in Beaches). And some have eagerly taken on the acting challenge, like Joseph Gordon-Levitt, who was amazing as a young Bruce Willis in Looper. To have replaced that performance with a digitally-smoothed Bruce would have been a crime.

And then there’s the question as to how much a de-aged performance qualifies as “acting.” Stewart and McKellen, and the trio in The Irishmen all took a full-body approach to the de-aged scenes, requiring them to reacquaint themselves with the physicality of young men. There is no question, those were performances. (In Stewart’s case, it was also the first time in three X-Men movies where his normally-wheelchair-using character was given the opportunity to walk).

But in Denis Villeneuve’s Blade Runner 2049, Sean Young contributed only her face. An actress named Loren Peta performed the role of the young replicant Rachael on camera. Young later had her face scanned as she repeated the lines.

It’s possible digitally to contribute body parts, have other parts added on, even revive dead people. A primitive version of the technology was used in Gladiator to film some scenes with Oliver Reed after he died mid-shoot, while more advanced CGI allowed Peter Cushing, who died in 1994, to reprise his role as Imperial Officer Grand Moff Tarkin in 2016’s Rogue One: A Star Wars Story in what was called, “one of the most complex and costly CGI re-creations ever.”

But there will undoubtedly be push-back against even the best digitally de-aged performances. The Academy of Motion Picture Arts & Sciences has, for example, refused to consider changing its rules for Andy Serkis, the king of motion-capture performances (Gollum, King Kong, Caesar in the Planet of the Apes movies) after more than a decade of campaigning.

As for aging stars simply wanting to look younger onscreen, the technology is still too expensive to be used simply for purposes of vanity. The digital bill helped push The Irishman’s budget up to $140 million (the movie had to be rescued by Netfix when the major studios balked).

But today’s high-priced tech is tomorrow’s toy. So, who knows? We could see very well Tom Cruise running around in Mission: Impossible 10, even when he’s using a walker off-screen.

Robbie Robertson Talks TIFF, the Band, Once Were Brothers and The Irishman