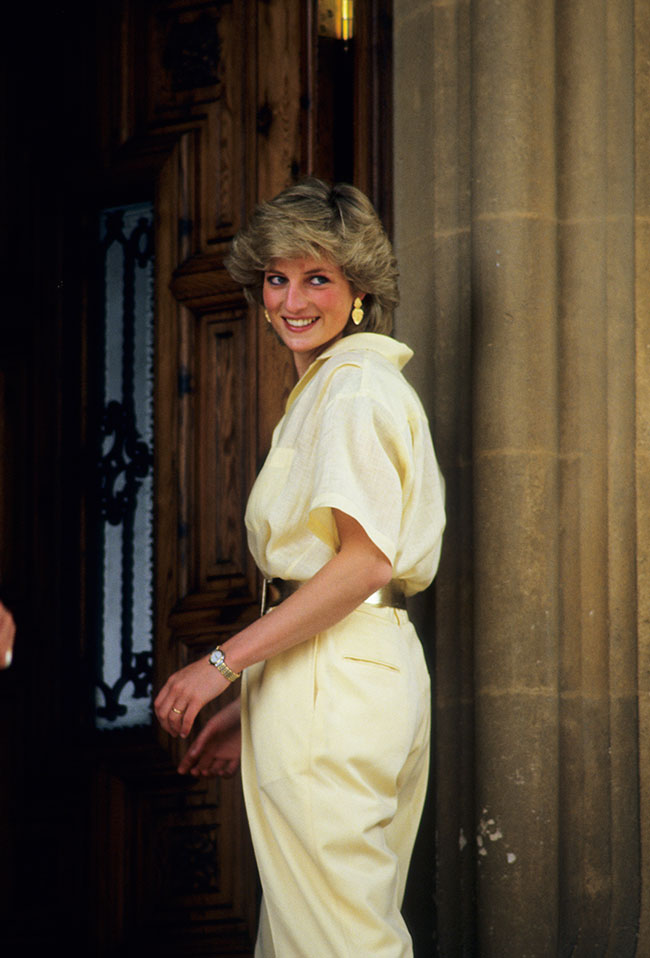 Diana, Princess of Wales is played by rising star Emma Corrin in the upcoming season of "The Crown." Photo: Georges De Keerle/Getty Images

The Crown’s Princess Diana received a royal reveal on Tuesday, with Netflix sharing a first look at actress Emma Corrin as the Princess of Wales — as well as Gillian Anderson as Margaret Thatcher — ahead of the show’s highly anticipated fourth season debut on Nov. 15.

The show’s Twitter account tweeted the snaps of the cast in action on Tuesday with a simple yet appropriate caption: “Change is coming.”

The third season of The Crown concluded with the forced break-up of Prince Charles and Camilla Shand, with the future king shipped off with the Royal Navy while Camilla weds Andrew Parker-Bowles.

The fourth season, then, picks up Diana’s story in her teenage years and goes on to cover some of her pre-palace life, courtship and marriage to Prince Charles — and the drama that ensues — as well as her hurried transition to her royal role and her enduring battles with the relentless paparazzi. It also chronicles the disintegration of Charles and Diana’s marriage — though the separation and eventual divorce will likely appear in Season 5 — and the births of both Prince William and Harry.

“You meet her and she’s…16 years old,” Corrin told Vanity Fair in an exclusive interview, recalling the character’s first scene, in which Charles stops by the Spencer family home to pick up Diana’s elder sister, Sarah, for a date. “From episode one to three, we see her dynamic before she goes into the palace—and how normal she was, living in her flat with friends…then she’s really transported overnight.”

Among the real events covered in season four is Diana and Charles’ televised engagement interview, including the cringe-worthy moment when the royal couple are asked if they’re in love. Diana said, “Of course” while Charles infamously responded, “Whatever ‘in love’ means.”

Are You There, Your Highness? It’s Me, Margaret

With trouble brewing within the palace, the upcoming season also introduces new political pressures on Queen Elizabeth — played by the returning Olivia Colman — navigating an uneasy relationship with Anderson’s Margaret Thatcher, whose tenure as British Prime Minister, from 1979 to 1990, lines up with the new season’s timeline. And tensions only rise with major events like Thatcher spearheading the British charge into the Falklands War in 1982.

The Crown creator and writer Peter Morgan says learning that the pair were born just six months apart helped him imagine the dynamic that may have existed between them.

“They’re like twins who are not the same,” Morgan told Vanity Fair. “They’re both very resilient, very committed, work incredibly hard, have an extraordinary sense of duty. They’re both really committed to the country. They both have a strong Christian faith. They’re both girls of the war generation who switch the lights off when they leave a room. But then they had such different ideas about running the country.”

While fans recently welcomed the news that the series plans to return for a fifth and sixth season, they may want to curb their usual habit of binge watching the latest instalment. The show is taking a filming break until next year, meaning Season 5 will premiere in 2022.

Netflix Isn’t Done with the Royals

Netflix’s association with the People’s Princess doesn’t end with The Crown. In August, the streaming giant announced that it will present a filmed version of Diana: A Musical, an upcoming Broadway production that was temporarily shut down ahead of its scheduled start in March due to the COVID-19 pandemic. The musical biopic will be filmed before an empty audience at Broadway’s Longacre Theatre and is reportedly set to debut on Netflix early next year.

And, of course, Netflix is now business partners with two other royals. Earlier this month Prince Harry and Meghan Markle announced a multi-year deal with the streaming giant to produce films and documentaries that fall under the banner of what they called, “inspirational family programming.” The exact dollar amount Netflix is paying the royal couple is unclear — one report suggested it’s as much as $100 million — but it is believed that it will offer them financial freedom, allowing them to cut any remaining financial ties to the Royal Family while staying relatively out of the spotlight and working on projects close to their hearts.

Still, despite the relationship between the Duke and Duchess of Sussex and Netflix, don’t expect to see Harry and Meghan depicted on The Crown in any future seasons. When asked about incorporating the pair into the show, Morgan told The Hollywood Reporter that he believes that they’re in the middle of their journey and that he doesn’t know how it will end.

He added that, of news stories pertaining to the royals, that it’s hard to know which will be ” instantly forgotten” and which will be “sticking around and proving to be historically very relevant and long-lasting.” He compared it to the difference between being “journalistic” and being a “dramatist,” adding that the latter requires perspective.

“There have been plenty of opportunities in the past where there have been marital complications. There’ve been wives that have been married into the Royal family that have felt unwelcome and that they don’t fit in,” he explained. “So there are plenty of stories to tell without telling the story of Harry and Meghan.”