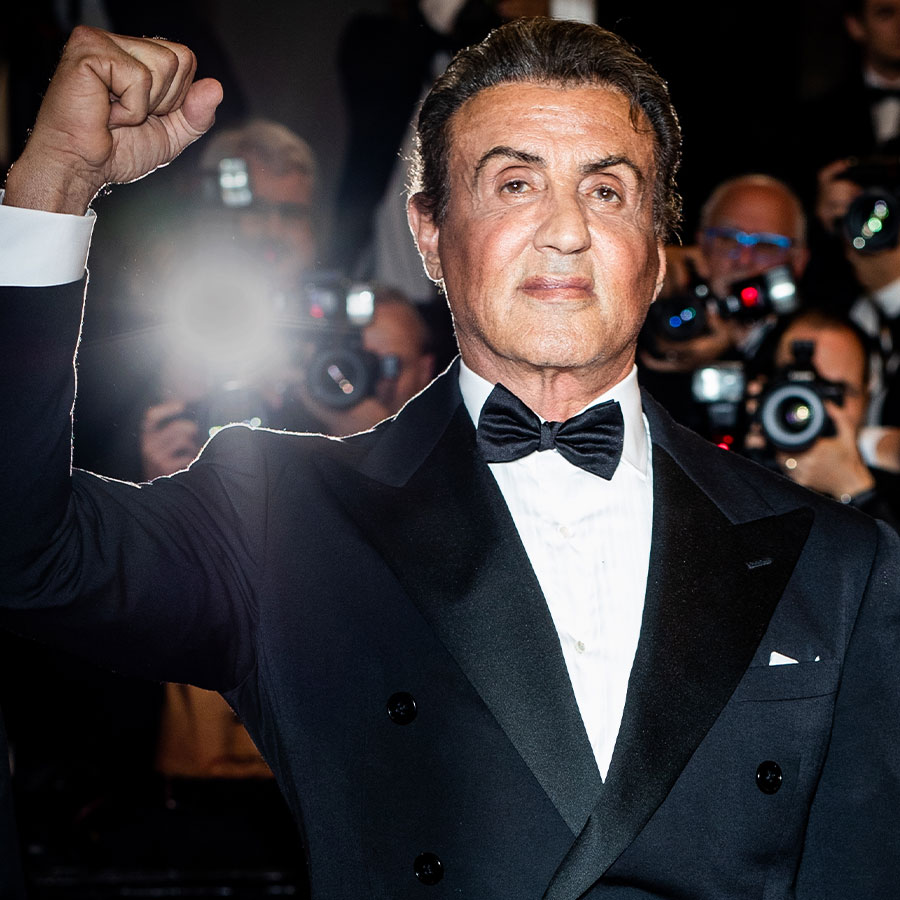 In purely Hollywood terms, July is the most action-packed month of the year. Aside from traditionally being the jumping off point for summer movie blockbusters, it boasts the most action movie star birthdays of any month on the calendar, including: Tom Cruise, Vin Diesel, Harrison Ford, Michelle Rodriguez, Arnold Schwarzenegger, Wesley Snipes, Sylvester Stallone and Jason Statham.

Of course, for some, 75 today looks a lot different than 75 a generation ago. For example, the great Jack Lemmon and Walter Matthau were 68 and 73 respectively when they starred as the eponymous Grumpy Old Men in the hit 1993 comedy. Meanwhile, Stallone celebrated the lead up to his 75th by posting workout videos and showing off his guns on Instagram.

I dare you to tell the guy in the photo above that he’s a grumpy old man. It won’t end well.

That said, there’s no wrong way to turn 75 — whether you’re Lemmon and Matthau or Stallone — or somewhere in between — it’s all good.

When it comes to Stallone, he told Metro UK in 2014 about his belief that “Age is a state of ‘old’ mind. It gets to a point where … you get old enough you forget how old you are, and that’s the best thing.”

Sly, of course, is known for staying in stellar shape and, with the action film Samaritan — in which he plays an aging superhero who returns after missing for decades — slated for later this year, and The Expendables 4 rumoured to be on the docket for 2022, it’s no surprise why he remains so buff.

It’s also no surprise that action stars of the 1980s and 1990s — Stallone, Cruise, Ford, Snipes, Schwarzenegger, et al — are still going strong on the big screen. John Wayne, for example, was making westerns into his late 60s, while Charles Bronson made Death Wish films and other action movies through his 60s and early 70s.

Where they differ is how many of these aging action stars today are redefining how we perceive age. In their later films, Wayne and Bronson, for example, generally looked like men in their 60s and 70s who happen to be gunslingers or action heroes. And, of course, that’s perfectly fine.

Stallone, though, is just as buff — if not more — today than he was in his Rocky and Rambo heyday. Meanwhile, Schwarzenegger, who turns 74 this year, reprised his Terminator role in 2019 and is supposedly set to play Conan the Barbarian one more time in an oft-delayed upcoming sequel.

Stallone last played Rambo in 2019, while Linda Hamilton, in that same year, appeared as her character Sarah Connor alongside Schwarzenegger in Terminator: Dark Fate — the picture of a legit badass at age 62, muscles on display as she blew away bad guys with big guns that used to be reserved for male movie stars decades younger than her.

“I really gave it careful consideration,” Hamilton explained at the 2019 San Diego Comic-Con. “It was the passage of time. The character is the same, but time changes everything. What has happened to make her who she is now? I felt there was a world of richness I could explore, and then rock it as a woman of a certain age.”

For context, Estelle Getty was the same age — 62 — when she began playing Sophia Petrillo on the classic sitcom The Golden Girls in 1985, while co-stars Bea Arthur and Betty White were a year younger.

Again, that’s perfectly fine. Furthermore, none of this is to say that the rest of us should buff up and battle bad guys into our 60s and 70s. Heck, no one expects folks in their 50s to be jumping out of planes and clinging to the sides of skyscrapers à la Tom Cruise, who turned 59 on July 3.

Rather, it’s about the perception of age. The generation of stars in their 60s and beyond today are shattering the limits of how many expect people of their ages to act and look.

It’s similar to what Oscar-winning actor Martin Landau told Zoomer in 2015, at the age of 87, about his disdain for “grunter” roles he’d get offered — parts like “an old guy who sits at a table that the young people make fun of.

“I get too many scripts like that and I can’t do them, I just can’t do them, even if they were big pictures, so I turned them down. I love challenges.”

To that end, Jamie Lee Curtis, 62, is slated to reprise her role as Laurie Strode and go toe-to-toe with Michael Myers one final time in the slasher flick Halloween Ends in 2022. And Harrison Ford — who turns 79 on July 13 — plays Indiana Jones in the fifth instalment of the action-adventure series, though a recent injury that occurred while shooting a fight scene has sidelined him from filming for the immediate future.

Injuries aside, neither Curtis nor Ford are jacked to the gills. But they’ve got the attitude and the energy to make their respective movie roles work. A generation ago, though, having a 60-something actress helm a horror franchise, or a near-80-year-old actor tackle an action-adventure film would have been a non-starter. Both would have likely been cast as the kindly grandmother or wacky grandfather, playing second fiddle to much younger stars.

“I just don’t think of age and time in respect of years,” Ford once told The Toronto Star. “I just have too much experience of people in their 70s who are vigorous and useful and people that are 35 that are in [lousy] physical shape and can’t think straight. I don’t think age has that much to do with it.”

“Remember in old vaudeville, there was a cane that came out and snatched you off the stage?” Stallone added in his Metro UK interview. “Well, I’m waiting for that. Until they just hook me off the stage, that’s it.”